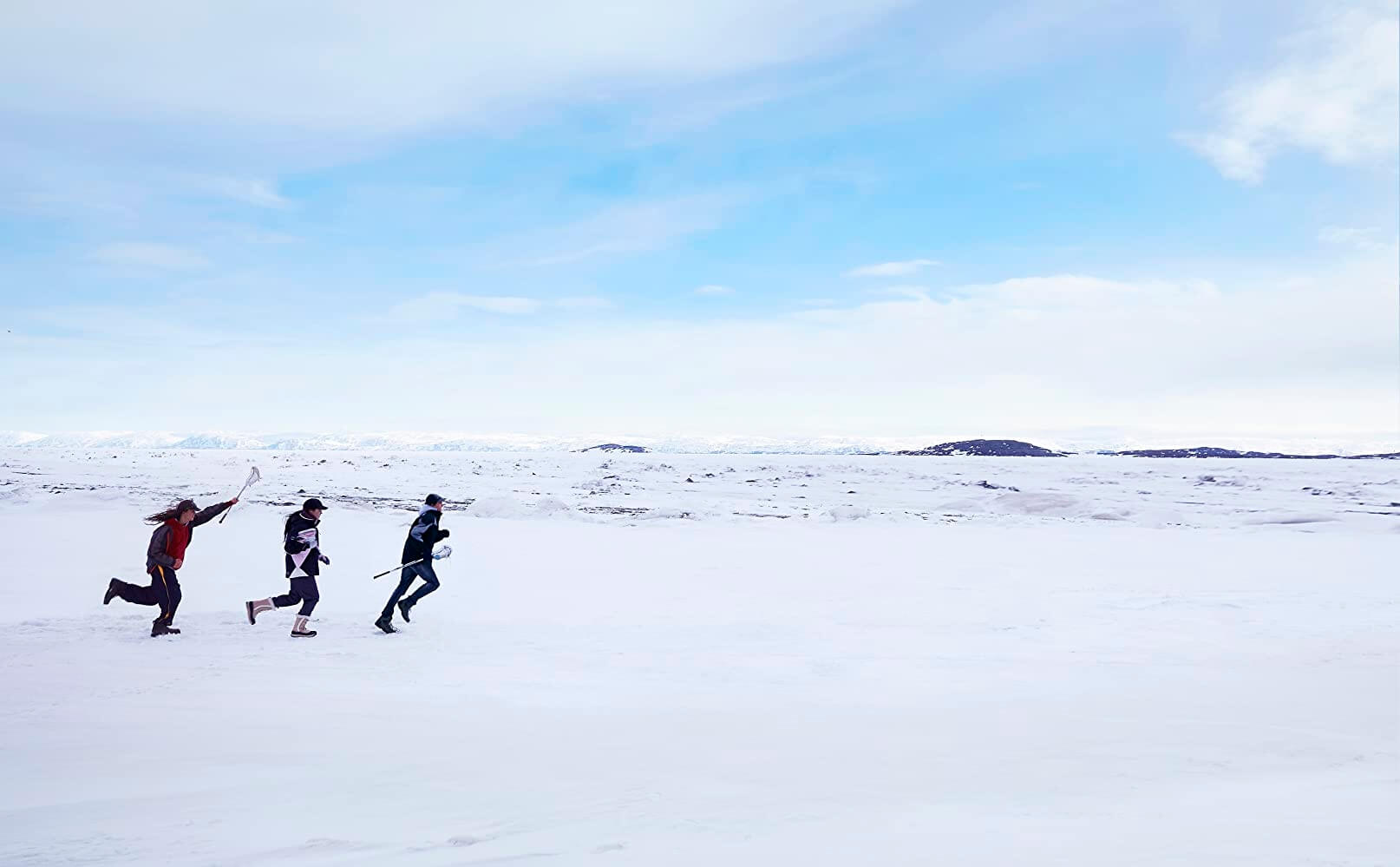 Photo Credit: CNS/courtesy Searchlight - Ricky Marty-Pahtaykan, Anna Lambe and Paul Nutarariaq star in a scene from the film "The Grizzlies."

Director Miranda de Pencier’s drama “The Grizzlies” (Northwood Entertainment) tells the inspiring true story of a town that suffered the highest suicide rate in North America but found hope through the introduction of a lacrosse program for its teens.

Fresh out of college in 1998, Russ Sheppard (Ben Schnetzer) took a job as a history teacher at the Kugluktuk High School in the Canadian Arctic territory of Nunavut. Little did he know what awaited him there.

On reaching the village, he found that many of the students didn’t even bother attending classes. They would hang out drinking or taking drugs, not really caring about what life would hold for them.

The suicide rate was high, no one being immune to the deaths that had crosses in the cemetery multiplying at an alarming rate.

Having played lacrosse in college, Russ began to wonder if introducing the sport could give the kids something for which to live. He started a hard sell to spark interest, first on the part of the school’s principal, Janace (Tantoo Cardinal), and then among the students.

Russ’s naivete about Native culture was apparent almost immediately. Yet one student had pity on him. Miranda (Emerald MacDonald) told him that if he got her fellow students Zach (Paul Nutarariaq) and Adam (Ricky Marty-Pahtaykan) on board, the others would join. But first, Russ had to approach them face-to-face, showing respect, instead of just handing out a flyer.

As the viewer is introduced to each teen, their family lives, mostly tales of woe, are laid bare. Zach’s parents are only seen passed out drunk on the couch as the youth forages for food to feed himself and his little brother. Miranda is abused at home and Kyle (Booboo Stewart) witnesses his father’s abuse of his mother.

Adam has to deal with his grandparents, Inuit who insist on the old ways with little openness to anything that comes from outside the community. Yet, these adolescents, each suffering with his or her own problems, find an outlet and a new kind of family in the team.

“The Grizzlies” could have been another white-savior film. As scripted by Moira Walley-Beckett and Graham Yost, however, it’s not. Yes, Russ gets the team going, but he learns just as much from his students as he teaches them. And it’s the teens themselves who build the squad and keep it going.

The inspirational sports movie formula is nothing new, but “The Grizzlies” isn’t really about sports, per se. It’s about widespread despair and the hope that comes when a community refuses to let their circumstances dictate their lives. Given that message, many parents may deem it acceptable for older adolescents.

The film contains mature themes, including suicide, drug abuse and alcoholism, as well as some crude and crass language. The Catholic New Service Classification is A-III — adults. The Motion Picture Association rating is R — restricted. Under 17 requires accompanying parent or adult.