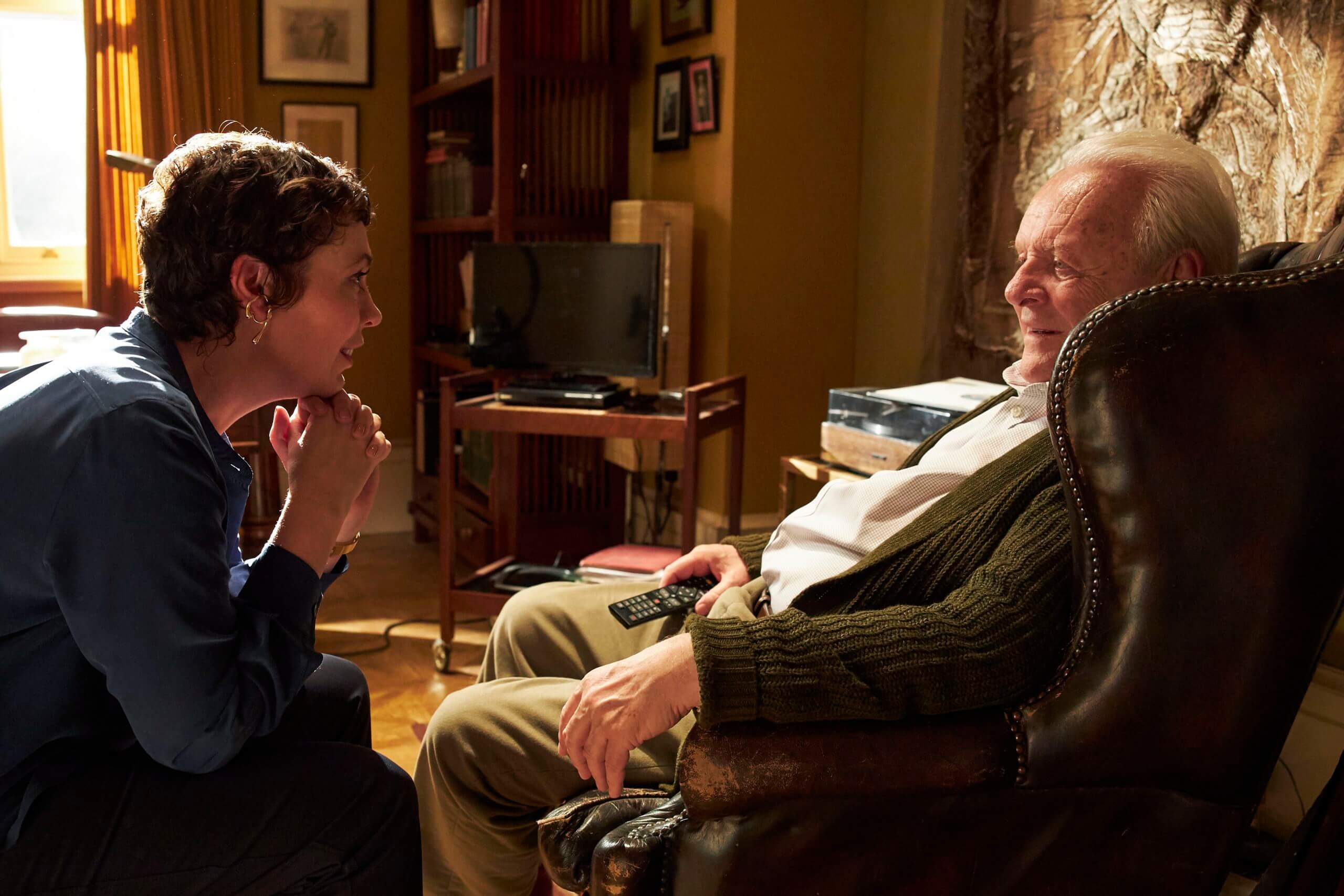 Photo Credit: CNS/Sean Gleason, Sony Classics - Olivia Colman and Anthony Hopkins star in a scene from the movie "The Father."

“The Father” (Sony Classics) has nothing new to say about the challenges of dementia.

Yet, in adapting his play with co-screenwriter Christopher Hampton, director Florian Zeller does succeed in presenting the difficulties resulting from that illness in an innovative way. His drama portrays the mental confusion of a man in his 80s by keeping the viewer off-balance as well.

Thus Anthony (Anthony Hopkins) sometimes sees different women (Olivia Colman or Olivia Williams) as Anne, the daughter with whom he lives. Additionally, he’s often taunted by a strange man (Mark Gatiss) who announces that he also lives in their London apartment and sometimes describes himself as Anne’s husband, Paul — even though Anne has been divorced for five years.

Anthony is usually good-natured, although sometimes cranky. His fears don’t last very long at first, and he never goes outside by himself. But clearly, with Anne about to move to Paris to pursue a live-in and — she hopes — permanent new romance, it’s time for Anthony to go into a nursing home.

Zeller shows Anthony’s perception of the apartment and the people around him as vividly as Anthony experiences it. And, when that shifts, it’s never clear which is the reality and which is the illusion.

That’s particularly true where Anne’s motives and behavior are concerned. She handles her father with immense patience, compassion and humor, especially when he lashes out at Laura (Imogen Poots), his final at-home caregiver, and accuses everyone in sight of stealing the wristwatch to which he clings — along with his many opera recordings — as an emblem of reality.

Financial considerations and assorted health problems other than mental decline are not the issue. Instead, Anne — contrary to what initially appear to be her selfish motives in the matter — comes disinterestedly to the very sad and inevitable realization that Anthony needs to be looked after with more resources than she can provide for him on her own. Anyone who has cared for an elderly parent will identify with the pathos of Anne’s situation.

Skillfully understated performances by Hopkins and Colman, moreover, make this a moving experience even for those with no firsthand experience of the kind.

Anthony isn’t quite “losing” his mind. Rather, his brain functions like an ancient radio in which the tubes are blowing out one at a time. Nor is he ever violent, only fearful like a child. Some may see that as Zeller dodging one of the most troubling — and all-too-frequent — symptoms of Anthony’s condition.

Even if that omission does provide a polite veneer to the proceedings, though, “The Father” is admirably courageous in other respects, delving into moral depths and laying bare family relationships.

The film contains mature themes and fleeting coarse language. The Catholic News Service classification is A-III — adults. The Motion Picture Association rating is PG-13 — parents strongly cautioned. Some material may be inappropriate for children under 13.

Share This Post
movies, movie reviews, 'The Father'
See More
Last Article
Pope says he, too, kneels on Myanmar streets, begging for end to violence
Next Article
Sisters of St. Joseph have strong devotion to their patron saint
Back to Vermont Catholic Magazine