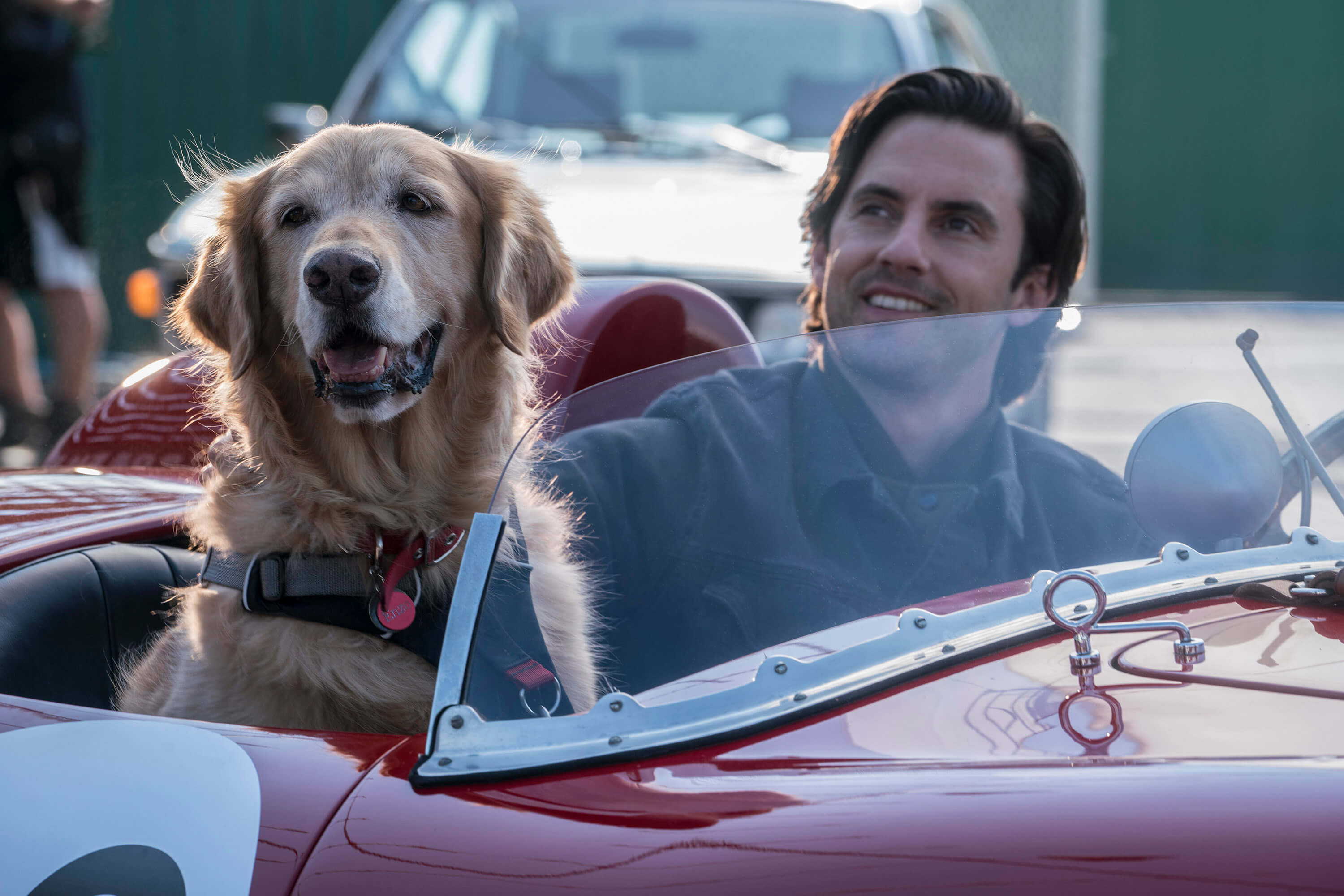 Photo Credit: CNS/Fox - A dog named "Enzo" and Milo Ventimiglia appear in the movie "The Art of Racing in the Rain." The Catholic News Service classification is A-III — adults. The Motion Picture Association of America rating is PG-13 — parents strongly cautioned. Some material may be inappropriate for children under 13.

Movie review: ‘The Art of Racing in the Rain’

“The Art of Racing in the Rain” (Fox 2000), an otherwise benign drama about a man and his dog, adapted from the novel by Garth Stein, is marred by a treatment of reincarnation that prevents endorsement of it for impressionable viewers.

Some somber plot developments suggest that this also is not a movie for sensitive kids.

Kevin Costner provides the voice of Enzo, a wise old golden retriever who narrates, in retrospect, part of the life story of Denny Swift (Milo Ventimiglia), the aspiring Formula One racecar driver who adopted him as a puppy. (Auto enthusiasts will recognize that Denny has given his pet the first name of the founder of the Scuderia Ferrari Grand Prix motor racing team and of the eponymous car brand.)

Though Denny proves a devoted owner and all-around good guy, he faces both professional and financial challenges. Yet, as far as his personal life goes, he hits the jackpot when he falls for gentle teacher Eve (Amanda Seyfried). Their model marriage eventually produces daughter Zoe (Ryan Kiera Armstrong), rounding out the cozy household.

As Mark Bomback’s script telegraphs a little too far in advance, however, further difficulties lie ahead, beginning with the antipathy toward Denny of his Eve’s snooty rich parents, Trish (Kathy Baker) and Maxwell (Martin Donovan). The folks, it seems, prefer boardrooms to racetracks.

With its portrait of spouses who support each other admirably in good times and adversity alike, director Simon Curtis’ film would normally be a movie to celebrate. But the seriousness with which it takes Enzo’s aspiration to return as a human being in his next life — a possibility first raised by a TV documentary about Mongolia he once watched — makes it problematic for youthful viewers.

As typified by the foreshadowing mentioned above, their elders will note some clumsy storytelling. And there’s a high level of predictability in the tale, while the malice of martini-drinking Maxwell and slightly more sympathetic Trish sometimes strains credulity. Even so, minus those Mongolian-bred musings about Enzo’s destiny, reinforced in the wrap-up, this is a perfectly pleasant time killer that’s probably acceptable for mature teens.

The film contains implied premarital sexual activity, a single use of profanity and brief but graphic scatological humor. The Catholic News Service classification is A-III — adults. The Motion Picture Association of America rating is PG — parental guidance suggested. Some material may not be suitable for children.

Share This Post
Catholic Schools, movies, Marriage and Family, Vermont Catholic Professionals, 'The Art of Racing in the Rain'
See More
Last Article
Church is a mother to all, remains close to those who suffer, pope says
Next Article
Pro-life leaders urged to persevere, continue to teach truth ‘with love’
Back to Vermont Catholic Magazine