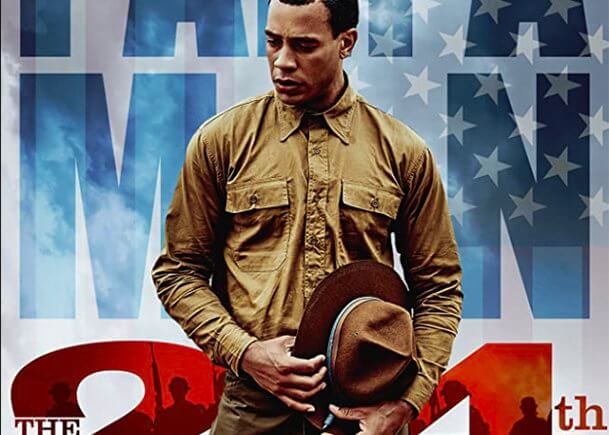 Photo Credit: CNS - This is the movie poster for "The 24th."

“The 24th” (Vertical) is the rare historical drama that plays out like a horror film. The story succeeds best in giving names, faces and context to the participants in what became known as the Houston Riot of 1917.

As we’re shown, in the midst of World War I, the all-Black 24th Infantry Division at Houston’s Camp Logan endured officially sanctioned racism in the military and unblinking nihilistic scorn from the local police. The volatility doesn’t extend only to the soldiers, who are punished by being flogged with burlap sacks filled with grapefruits. One police officer is also shown violently arresting a young Black mother with an infant.

After a rumor that a group of whites is headed to the base to slaughter the servicemen, they take to the streets, their rage exploding with tragic results. Twenty were left dead: 11 civilians, five policemen and four Army personnel.  In the resulting trial — still the largest murder trial in American history — 58 men were convicted and 19 were executed.

The attempt to blend fictional romantic drama with an ugly chapter in America’s racial history slows the movie down at points. So, too, does the tendency to give characters speeches in place of realistic dialogue.

A viewer can sense that, in recounting an incident that deserves to be remembered, director Kevin Willmott, who co-wrote the screenplay with Trai Byers, is carefully straining to give the characters fully rounded lives and to convey to the audience an awareness of their struggle.

As a result, we get lines like this one from William Boston (Byers), an idealistic newly arrived corporal, who tells his girlfriend Marie (Aja Naomi King), “If you die fighting for justice, you never really die.” Another statement is clearly meant to have contemporary resonance: Abner Lockhart, (Jim Klock), a white officer, mutters ominously, “We’re gonna take our … country back.”

“The 24th” also touches on the subtler forms of racial hierarchy, including the disdain shown by the darker-skinned soldiers toward the lighter-hued, better-read Boston.

Having been educated at the Sorbonne, Boston has hopes for a tolerant future. But he also turns down the opportunity for officer training offered him by the 24th’s commander, Col. Norton (Thomas Haden Church), because he considers it his duty to remain with his unit.

Mykelti Williamson as Sgt. Hayes serves as the narrative’s prophet of doom. He knows he’s trapped in an unjust world and that the coming tragedy is inevitable. Yet he also recognizes that violence will not be the solution.