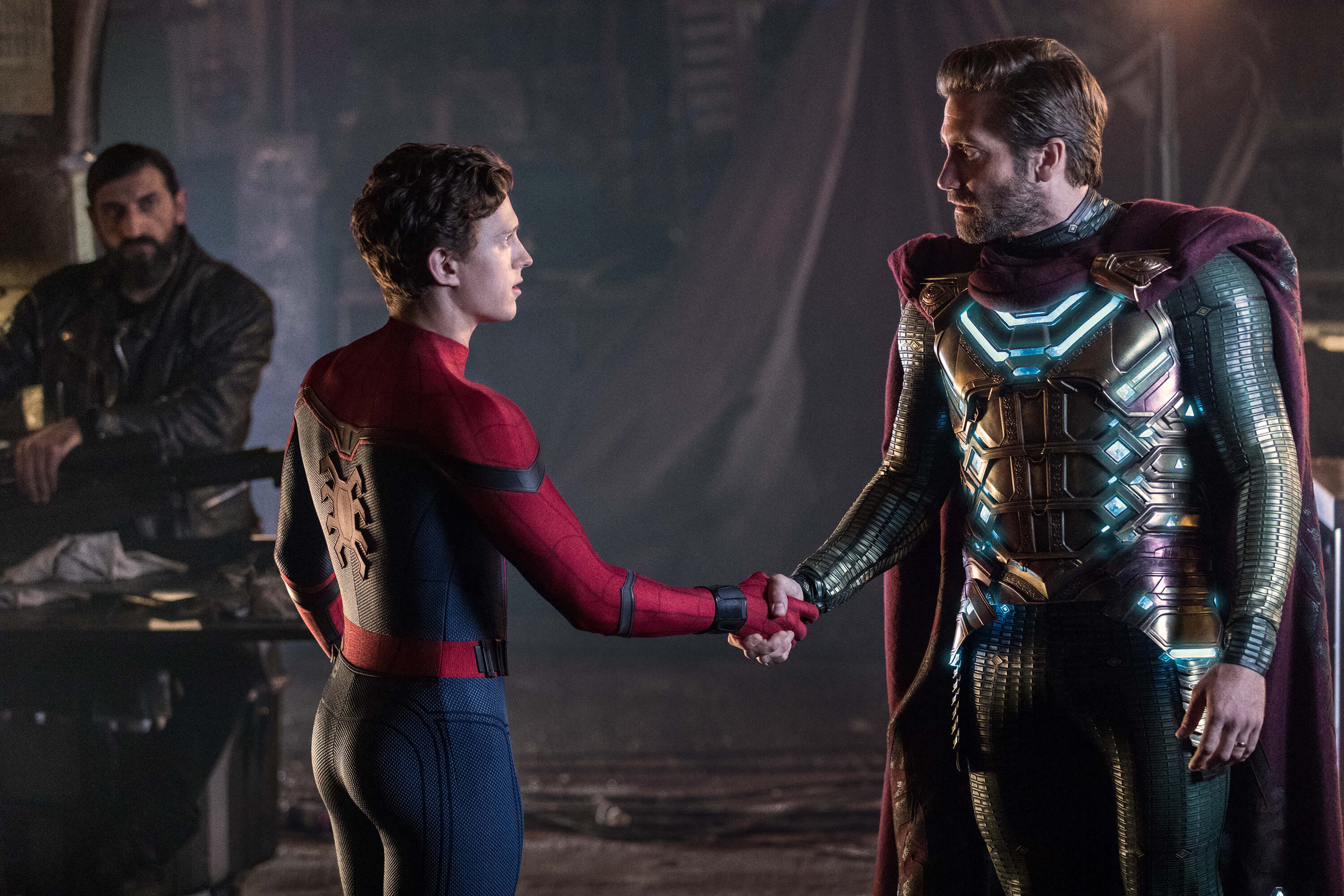 Photo Credit: CNS/Sony - Numan Acar, Tom Holland and Jake Gyllenhaal star in a scene from the movie "Spider-Man: Far From Home." The Catholic News Service classification is A-III — adults. The Motion Picture Association of America rating is PG-13 — parents strongly cautioned. Some material may be inappropriate for children under 13.

Snappy and substantial, “Spider-Man: Far From Home” (Columbia), director Jon Watts’ follow-up to his 2017 feature “Spider-Man: Homecoming,” is an adventure full of bloodless derring-do and gentle, innocent romance. As a result, many parents may consider it acceptable for older teens.

True to its title, the film finds the eponymous superhero (Tom Holland) traveling across Europe on a summer trip organized for the students of his alter ego Peter Parker’s high school. He wants to spend the journey, which includes stops in Venice and Prague, courting MJ (Zendaya), the vaguely goth classmate with whom he’s smitten, and hanging out with his best pal, Ned (Jacob Batalon).

But hard-driving crime fighter Nick Fury (Samuel L. Jackson) forcefully recruits him to join the battle against the sole survivor of a quartet of monsters known as Elementals. So, at Nick’s behest, Peter teams with Quentin Beck, aka Mysterio (Jake Gyllenhaal), an alien whose world — a version of Earth that existed in a different part of the multiverse — was destroyed by the creatures.

He’s eventually so impressed with this new comrade that he gives him the vastly powerful technological system, dubbed EDITH, that he inherited from his late mentor, Tony Stark, alias Iron Man (Robert Downey Jr., seen only in images). Peter soon discovers, however, that his trust may have been misplaced.

Screenwriters Chris McKenna and Erik Sommers continue to explore the franchise’s recurring theme about the responsibilities that come with power. In this case, Peter’s regifting of EDITH, a sort of weaponized Alexa or Siri, is symptomatic of his doubts about his ability to step into Tony’s shoes.

(The fact that Peter is mourning Tony connects the movie not only to its predecessor but to “Avengers: Endgame” from earlier this year in which Iron Man’s self-sacrificing death was portrayed.)

The script touches comically on some subjects unfit for little kids. Thus a character is quoted as theorizing that Peter’s long, mysterious absences while he’s off being Spider-Man are due to his secret career as a male escort.

Similarly, Tony’s sidekick, Happy (Jon Favreau) — who has begun a romance with Peter’s guardian, Aunt May (Marisa Tomei) — references the fact that he once came across some salacious material in Peter’s possession but concealed this discovery from May. These brief jokes are intended light-heartedly, but they’re clearly not fare for small fry — who might also be frightened by the scale and intensity of the action.

The film contains frequent stylized combat, mature references, including to pornography and prostitution, at least one mild oath, as well as a couple of crude and a few crass terms. The Catholic News Service classification is A-III — adults. The Motion Picture Association of America rating is PG-13 — parents strongly cautioned. Some material may be inappropriate for children under 13.