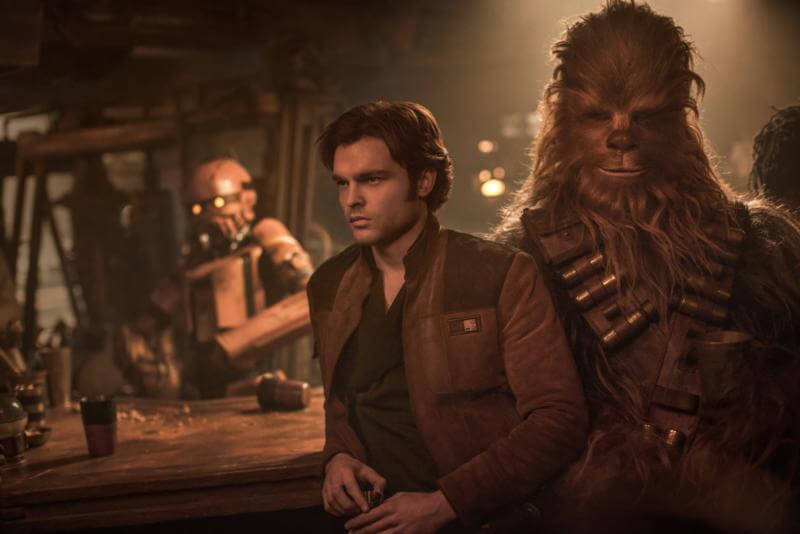 Before he grew up to be Harrison Ford, intergalactic freebooter Han Solo was Alden Ehrenreich — or so at least the folks behind “Solo: A Star Wars Story” (Disney), the pleasing but insubstantial latest addition to the blockbuster franchise, would have you believe.

And, since Ehrenreich’s ability to exude cheeky charisma is one of the film’s major assets, why not?

Working from a script by the father-and-son team of Lawrence and Jonathan Kasdan, director Ron Howard explores his protagonist’s origins and early adventures. Though he manages to serve up action aplenty and some engaging plot twists, depth of character is lacking.

After a Dickensian childhood tyrannized over by Fagin-like alien Lady Proxima (voice of Linda Hunt) and a stint in the forces of the evil Empire, Han hits his stride with a couple of good-hearted capers — one botched, the other complicated.

As it happens, Qi’ra (Emilia Clarke), the fair maiden for whom Han fell way back in his Lady Proxima days but from whom he was tragically separated, has since been ensnared by Crimson Dawn and now serves as Vos’ top lieutenant. So when Han and Tobias manage to convince Vos to let them square things with him by purloining a stock of valuable fuel, Qi’ra is dispatched to supervise their against-the-odds scheme.

Like the combat mayhem in earlier scenes, the violence that follows is sometimes harsh but mostly bloodless. And, though the movie doesn’t dwell on moral issues, Han’s rough-and-ready approach to property rights is offset, in keeping with his older persona, by his weakness for a good cause. At least some parents may consider that enough to make “Solo” acceptable for older teens.

Publicity in support of the picture has included references to the supposed “pansexuality” of Lando Calrissian (once Billy Dee Williams, now Donald Glover), the suave gambler from whom Hans wins his prized spacecraft, the Millennium Falcon, in a card game.

Though there are lines in the screenplay exploring the possibility of a relationship between Lando and his female android co-pilot L3-37 (Phoebe Waller-Bridge), these are phrased in a vague and joking way. Thus viewers unfamiliar with what has been said off-screen would hardly imagine that anything bizarre was being proposed with serious intent.

The film contains much stylized violence, occasional innuendo, a few mild oaths and a couple of crass terms. The Catholic News Service classification is A-III — adults. The Motion Picture Association of America rating is PG-13 — parents strongly cautioned. Some material may be inappropriate for children under 13.