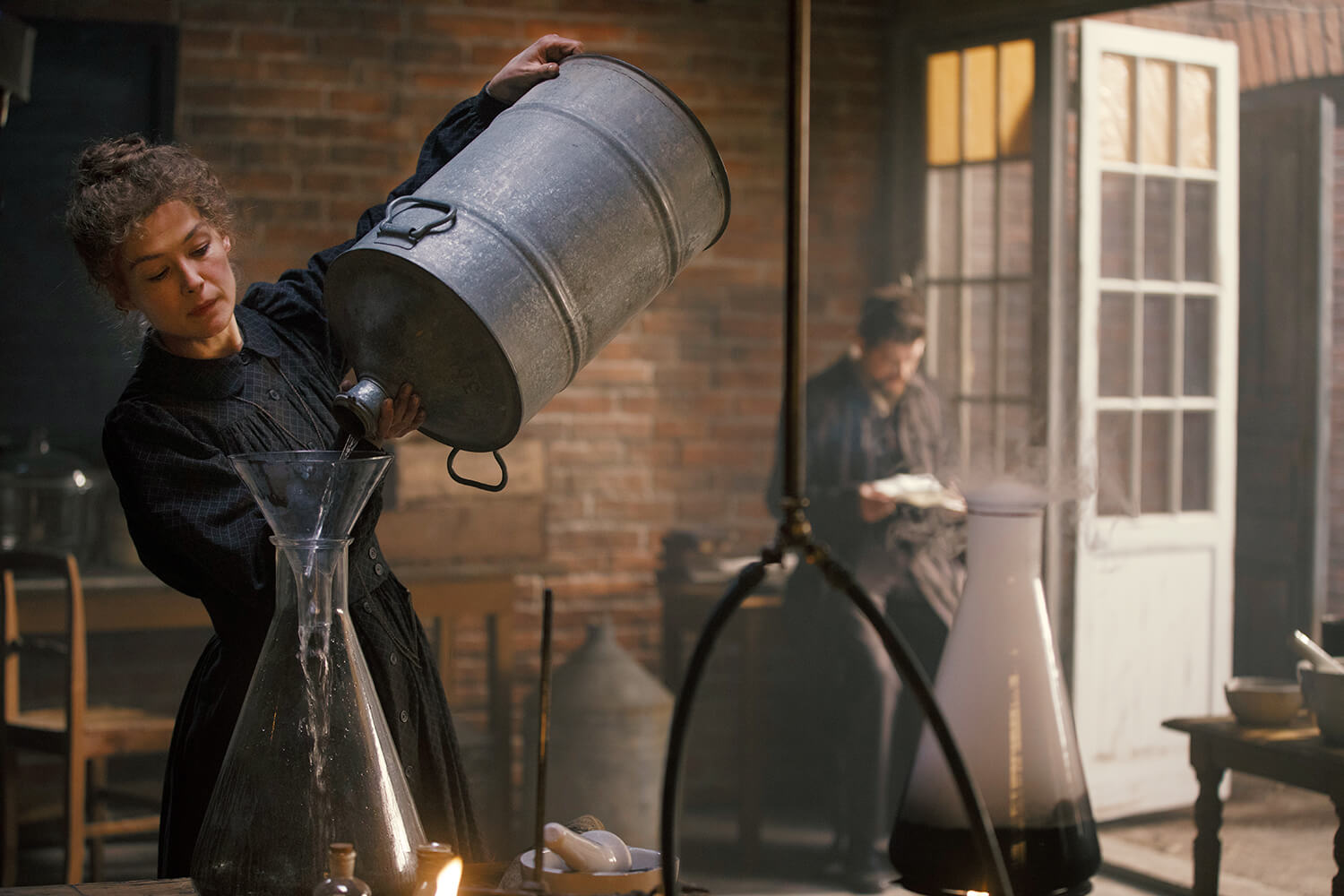 The key to any good film biography of a scientist is found in the montages that show the discovery or invention that gained the subject fame.

On that score, “Radioactive” (Amazon), the story of Marie Curie (Rosamund Pike), the first woman to be awarded the Nobel Prize for physics, does not disappoint.

A sequence that begins with the crude refining of a uranium mineral called pitchblende ends with Curie smiling in bed, caressing a vial of glowing blue-green radium. It’s a historical moment on the scale of Thomas Edison switching on one of his electric bulbs.

Those with at least a superficial knowledge of Curie, who died in 1934 of anemia brought on by radiation exposure, at only age 66, will immediately know that this doesn’t end well.

And that’s where the burden of this story, written by Jack Thorne from a fact-based graphic novel by Lauren Redniss and directed by Marjane Satrapi, can be sensed. The movie, in its devotion to tracing all the moral consequences of Curie’s pioneering work, sometimes trips over its own earnestness.

So there are scenes showing the use of radiation therapy for cancer treatment in the 1950s mingled with a sequence from the Enola Gay before its crew dropped the first atomic bomb on Japan in 1945 and a scene from the explosion of the nuclear reactor at Chernobyl in 1986.

It’s all useful. Attentive viewers can and will learn about matters far beyond the rampant sexism Curie faced as a Paris physicist in the 1890s. And the educational subject matter makes it potentially appropriate for mature adolescents.

But class is definitely in session here. This is the rare historical film that not only puts a study guide right there in its plot, but also gives the sensation of being fully footnoted, with maybe a pop quiz to follow.

The big romantic moment arrives before Marie Sklodowska and Pierre Curie (Sam Riley) marry, at the point at which she’s almost decided to give up science and return to her native Poland to teach French. He presents her with a quadrant electrometer to measure electrical charges.

“As you proposing a partnership?” she asks.

“I will never be the woman or the wife you want me to be,” she says. But they press on, enjoying mutual success and recognition far beyond what they could achieve individually.

Marie is haunted by the childhood memory of her mother’s death, which has compelled her ferocious work ethic and spurred her curiosity about whether an afterlife exists. Pierre, for a time, lurches into spiritualism but, in the way of all historical pageants, this becomes only a part of the passing scenery.

The film contains scenes of violence without gore, fleeting rear female nudity in a nonsexual context, brief marital sensuality and mature themes. The Catholic News Service classification is A-III — adults. The Motion Picture Association rating is PG-13 — parents strongly cautioned. Some material may be inappropriate for children under 13.

Share This Post
movies, Reviews, 'Radioactive', Marie Curie, Rosamund Pike
See More
Last Article
Toward priesthood
Next Article
‘Heroes’ of the Church are the saints
Back to Vermont Catholic Magazine