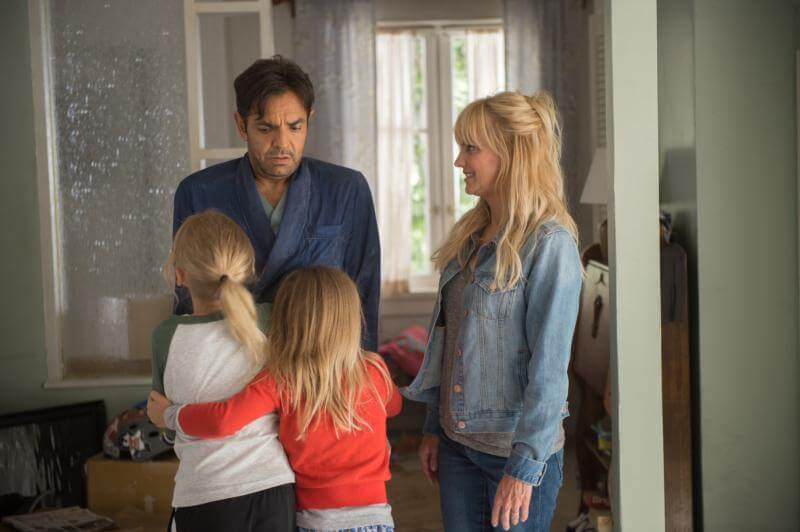 No need to throw a lifeline to “Overboard” (MGM), a surprisingly buoyant remake of the 1987 romantic comedy.

The original film is best remembered for the chemistry between its stars, real-life partners Goldie Hawn and Kurt Russell. Unfortunately, however, its plot involved a frivolous treatment of adultery.

Happily, director Rob Greenberg, who co-wrote the screenplay with Bob Fisher, somewhat untangles that aspect of the storyline; this time out, both leads are (at least currently) unattached. Greenberg is also well-served by the pairing of comedians Anna Faris and Eugenio Derbez — as well as by the switching of the gender roles, which gives a fresh take on the zany forgotten-identity plot.

Leonardo (Derbez), the spoiled scion of one of Mexico’s richest families, whiles away his days on a luxury yacht, awash in booze and surrounded by lovelies. He dismisses sensible working women like Kate (Faris), a single mother of three trying to make ends meet by holding down several jobs while also studying to be a nurse.

Kate arrives on the yacht to clean the champagne-soaked carpets. She and Leonardo argue over the bill, whereupon he gleefully tosses her overboard, then sails off into the sunset.

Actions have consequences, and that evening, our lothario interrupts his latest bout of casual sex to go above deck in search of a condom (this is Hollywood, after all). Now it’s his turn to fall overboard, with life-changing results. He washes ashore with amnesia, clueless as to his real identity.

Leonardo’s plight opens the door to two scheming women. In Mexico City, his sister Magdalena (Cecilia Suarez) sees her chance to take control of the family business and decides to make Leonardo’s disappearance permanent by faking his death.

Closer to home, Kate sees press coverage of Leonardo’s situation and — with the encouragement of her pizza-restaurant boss, Theresa (Eva Longoria) -— decides to serve up some “poetic justice.” She arrives at the hospital, claims to be Leonardo’s wife and takes him home.

“Overboard” descends into slapstick as Leonardo, unaccustomed to poverty and physical labor, abides by Kate’s rules, holding down a construction job by day and cooking and cleaning the house by night. But a transformation is in store, as Leo discovers a long-buried reservoir of goodness deep inside him that earns him the respect of his newfound family and co-workers.

While the ends never justify the means, and Kate’s abduction and deception are not to be condoned, viewers are hardly likely to have either the opportunity or the inclination to imitate her actions. Taken strictly as a comic fantasy, “Overboard” offers an entertaining parable about redemption.