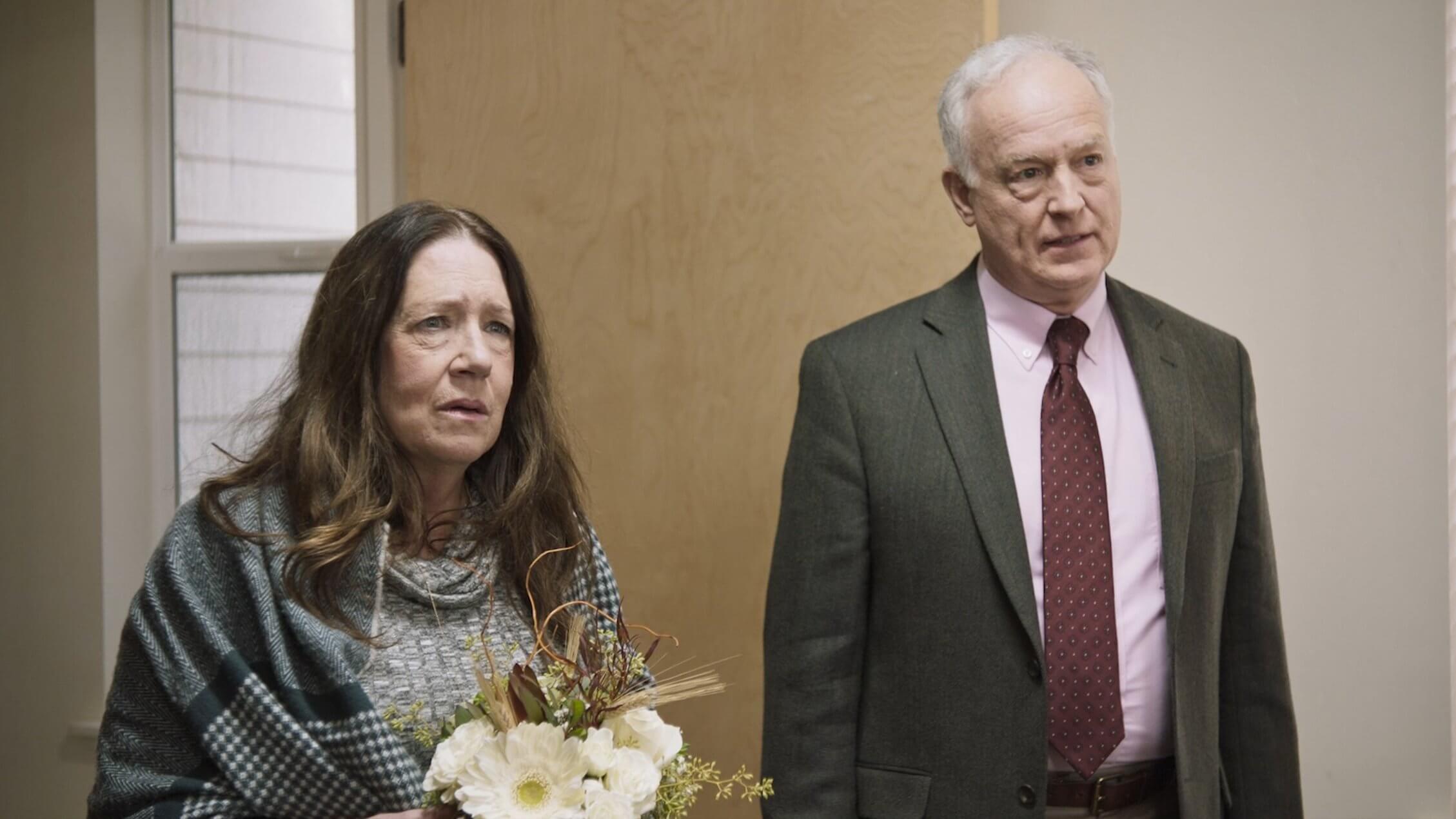 Photo Credit: CNS/Bleecker Street - Ann Down and Reed Birney star in a scene from the movie "Mass."

His strategy of feeding the audience information in little bits and bites pays off as viewers are made to feel like fly-on-the-wall witnesses to the intense encounter he portrays.

Kranz begins by building a subtle form of suspense. We watch as parish employee Judy (Breeda Wool) prepares a room for some kind of meeting on the premises of the small-town Episcopal church for which she works.

She meticulously oversees every minute detail, somewhat anxiously arranging furniture and putting out snacks, fussing over everything as if she were preparing for a gathering of VIPs. Then social worker Kendra (Michelle N. Carter) surveys the mostly unadorned space to make sure it’s appropriate for the solemn event that follows.

Even when the quartet for whom these careful arrangements have been made — couples Jay (Jason Isaacs) and Gail (Martha Plimpton) and Richard (Reed Birney) and Linda (Ann Dowd) — arrive, the audience is still uncertain what brings them together. Awkward pleasantries are exchanged, and it’s not until fully a third of the way into the film that Kranz tips his hand.

In responding to a query from Linda, Gail says, “Why do I want to know about your son? Because he killed mine.”

Kranz then sensitively probes the many questions such a tragedy provokes. He also shows how each parent has reacted to their shared affliction in a different way. Brought together in a safe environment, they have the opportunity to discuss and work through their varied feelings of anger, regret, confusion and grief.

The naturalistic ebb and flow of conversation as well as the interior ups-and-downs evoked are adroitly handled both by Kranz himself and by his cast of gifted character actors.

Isaacs and Plimpton convey how bereavement can engulf the soul. Birney’s Richard, by contrast, initially seems to be above it all. But such appearances, of course, can be deceptive. As for Dowd, she delves deftly into the paradoxical — yet understandable — plight of a mother forced to acknowledge that she raised a murderer but still determined to love her son.

Beyond its setting, the movie does not explicitly place the sufferings of its principals within a religious context. Simply by his choice of a title, however, Kranz seems to imply that God is present with the protagonists as they experience and express, on the one hand, their confusion and anguish and, on the other, their openness, empathy and willingness to forgive.

The film contains mature themes and a single crude term. The Catholic News Service classification is A-II — adults and adolescents. The Motion Picture Association rating is PG-13 — parents strongly cautioned. Some material may be inappropriate for children under 13.