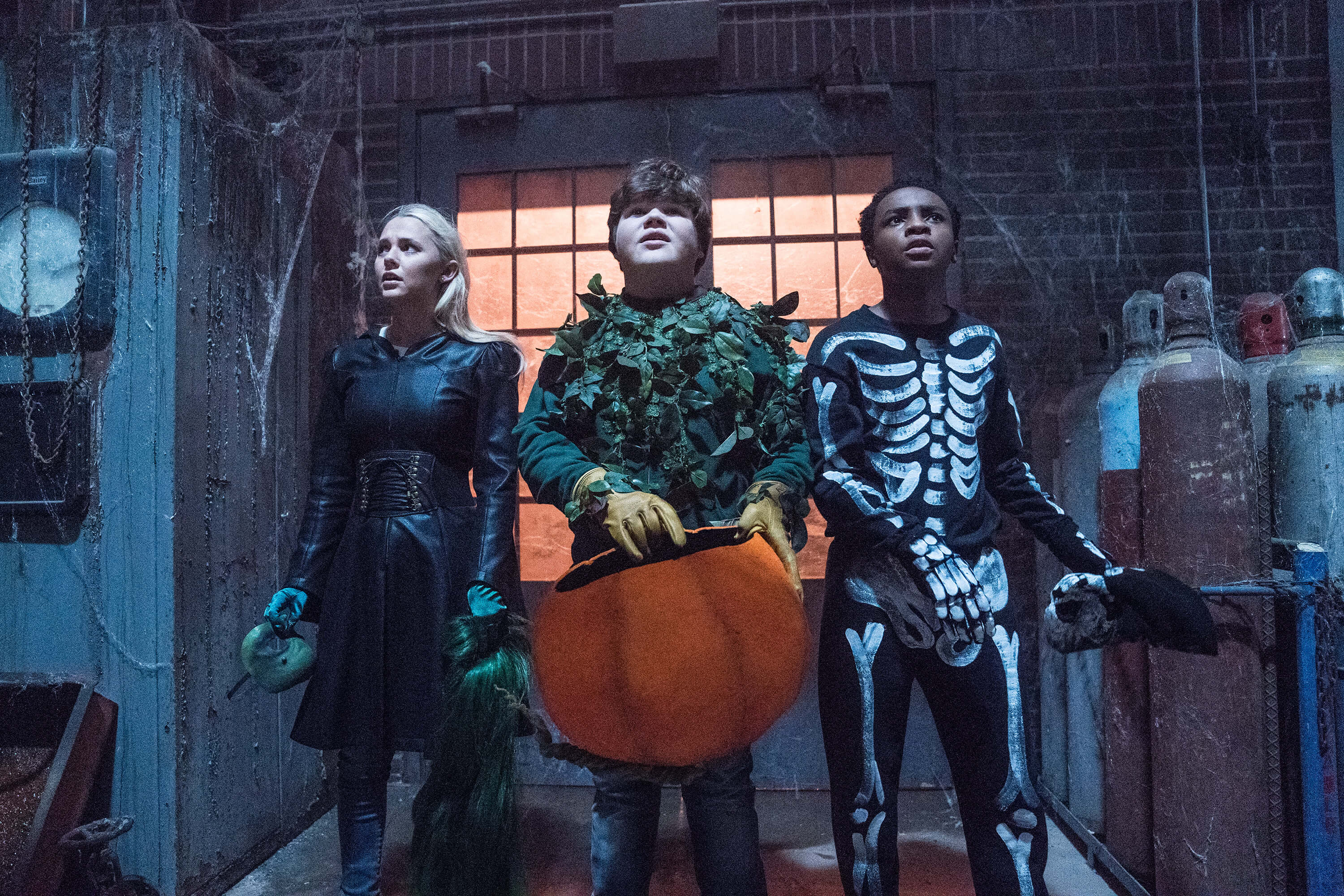 Photo Credit: CNS/Sony - Madison Iseman, Jeremy Ray Taylor and Caleel Harris star in a scene from the movie "Goosebumps 2: Haunted Halloween." The Catholic News Service classification is A-II — adults and adolescents. The Motion Picture Association of America rating is PG — parental guidance suggested. Some material may not be suitable for children.

Black returns in the same role for the follow-up “Goosebumps 2: Haunted Halloween” (Columbia). But the slight charms of the original have failed to follow him.

Too frightening for the youngest, this weak sequel includes a few touches even the parents of teens may not especially appreciate as it ambles along toward a wrap-up that unconvincingly promotes family solidarity.

While the first film drew on Stein’s work as a whole rather than any single volume, the current outing concerns an imaginary unfinished manuscript the writer supposedly abandoned and locked away at the start of his career.

This tome, which gives the film its subtitle, is accidentally discovered by two young boys, Sonny Quinn (Jeremy Ray Taylor) and Sam Carter (Caleel Harris) as the duo, who are both friends and partners, pursue their lemonade stand-style business hauling junk. As they soon discover, however, some trash is best left alone.

No sooner have they unlocked the trunk in which Stein secured the book than an evil ventriloquist’s dummy named Slappy (voice of Mick Wingert) makes his uncannily sudden appearance in their midst. Initially as inanimate as any other mannequin, Slappy is brought to life by the ill-advised recitation of a spell that Stein also, apparently, left behind.

Slappy initially appears to be a newfound ally for the unpopular lads. When Tommy Madigan (Peyton Wich), one of the bullies who continually torment them, tries to steal Slappy, the doll uses his telemetric powers to pants the persecutor, revealing his boxer shorts for all to see.

But Slappy is really, of course, wicked to his wooden core, as he reveals after his effort to be adopted into — and dominate — Sonny’s family is rebuffed. Using the same incantation that roused him, Slappy causes chaos by turning all the macabre Halloween decorations in Sonny and Sam’s small hometown into living, rampaging predators.

As a headless horseman, a trio of witches and a mummy — among many others — run amok, screenwriter Rob Lieber and director Ari Sandel mostly spin their wheels. The proceedings have almost run their course by the time they belatedly throw in a life lesson.

With Sonny’s mom, Kathy (Wendi McLendon-Covey), targeted by one of the creatures Slappy has unleashed, Sonny and Sam must learn to cooperate with Sonny’s older sister, Sarah (Madison Iseman) as they all battle to save dear Mama.

While teen viewers may fall prey to boredom, they’ll be in little spiritual danger from a movie whose eerie elements are all standard issue for the genre.

The film contains occult themes, some peril amid thoroughly stylized violence, brief scatological humor, a mild oath and a bit of mature wordplay. The Catholic News Service classification is A-II — adults and adolescents. The Motion Picture Association of America rating is PG — parental guidance suggested. Some material may not be suitable for children.