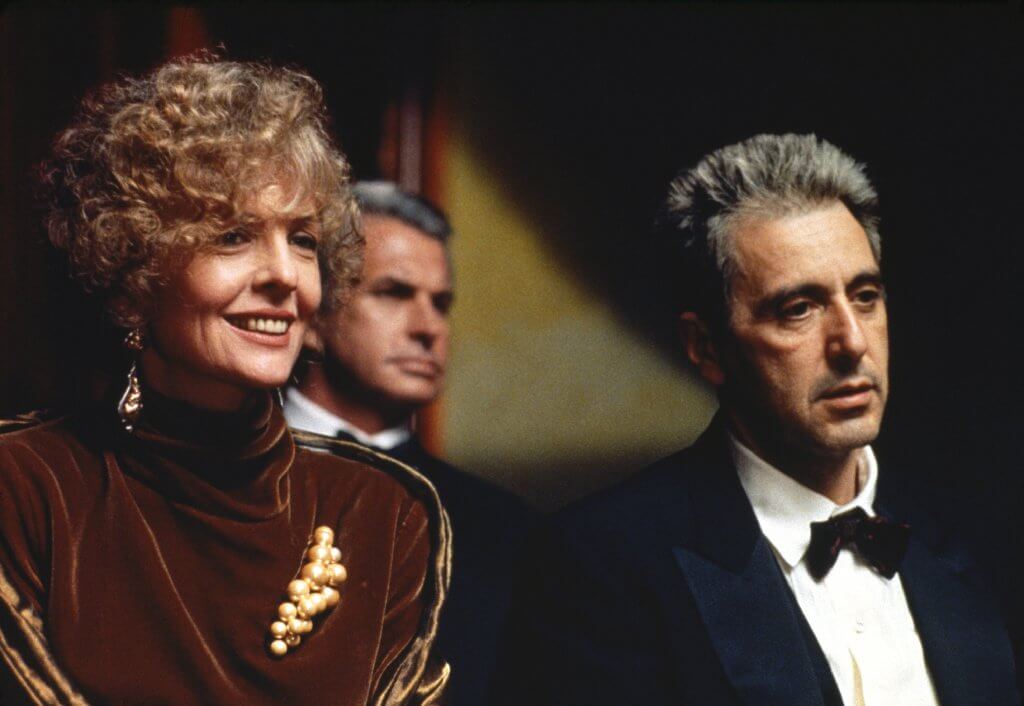 Photo Credit: CNS/courtesy Paramount - Diane Keaton and Al Pacino star in a scene from 1990's "The Godfather Part III" in a recut version, "The Godfather Coda: The Death of Michael Corleone," from director and co-writer Francis Ford Coppola.

Long reviled as a pale afterthought compared to its two predecessors, 1990’s “The Godfather Part III” (Paramount) is now available in a recut version, “The Godfather Coda: The Death of Michael Corleone,” from director and co-writer Francis Ford Coppola.

For those who have not seen it, or haven’t viewed it in some time, it’s a reminder that although mobster dramas that draw on events of the past can be engrossing, historical truth always loses out in the process.

Of the films in the franchise, this one has the most deeply intertwined Catholic imagery. But the details are a tangle of the factual and the imaginary. The principal plot involves corruption in the real-life Institute for the Works of Religion — what is commonly called the Vatican bank — and a scandal that tarnished its reputation in the early 1980s.

Here, the institute is headed by the unscrupulous Archbishop Gilday (Donal Donnelly). He’s a stand-in for Chicago-area native Archbishop Paul Marcinkus (1922-2006), who ran the institute for 18 years beginning in 1971. Donnelly’s character hisses like a screen villain of the 1940s but chain-smokes exactly as his real-life counterpart was known to do.

Similarly, Frederick Keinszig (Helmut Berger), a Vatican-affiliated banker, is based on Italian financier Roberto Calvi. The chairman of the Banco Ambrosiano, which collapsed in 1982, Calvi met a still-controversial fate when his body was found hanging from London’s Blackfriars Bridge soon after the Ambrosiano failed. Keinszig’s death mimics Calvi’s precisely.

This fictitious prelate hears the confession of series protagonist Michael Corleone (Al Pacino), then goes on to become pope under the name taken by the historical Cardinal Albino Luciani, John Paul I. Like Papa Luciani, however, this John Paul reigns for only a short time before dying under putatively mysterious circumstances.

Religious motifs also crop up during a street parade in New York’s Little Italy for the feast of San Gennaro. This becomes the setting for the gunning down of brash rival mobster Joey Zasa (Joe Mantegna) by Vincent (Andy Garcia), the hot-headed illegitimate son of Sonny Corleone (James Caan).

Just as a baptism served as the ironic backdrop for the blood-soaked finale of the first movie in the series, so here a slew of slayings is juxtaposed against the Easter hymn of Pietro Mascagni’s one-act opera “Cavalleria Rusticana” during a Sicilian production of that work starring Michael’s son, Anthony (Franc D’Ambrosio).

Deleted is the original version’s opening procession, during which Gilday presented Michael with the fictional Order of St. Sebastian. That award is presumably a riff on the real-life — and elaborately named — Pontifical Equestrian Order of St. Sylvester Pope and Martyr.

The final scene has been changed, too. It adroitly answers the grim question whether it’s better to endure extended suffering or accept a quiet death.

To get right to the heart of the matter: Is Coppola’s recut version an improvement?

In a word, yes. Coppola, in publicity materials, calls it “a more appropriate conclusion.” He’s right. The movie’s emotional and moral content is much clearer.

Most of the time, when a reedited film is billed for home video as a “director’s version,” it only means that it’s longer than the original. With more than 360 cuts — many of them imperceptible — Coppola, by contrast, has eliminated five minutes of Part III’s hefty 162-minute running time while also strengthening the plot.

In the first two outings, Michael’s soul turned to stone as he protected his family from harm. Now he deals with the consequences — and stumbles in the effort. He can’t purchase his salvation with his money, and he keeps getting pulled back into a life of crime.

Guilt and atonement are always substantial themes. The fact that here they come wrapped up in a complex, often sordid, presentation of Catholicism — one largely unaltered by Coppola’s changes — will make much the same impression on viewers of faith as it did 30 years ago.

Any imagined claim to be presenting an insightful critique of the church is undermined, however, by a telling gaffe. In a climactic scene, a churchman is seen wandering the Vatican in full Mass vestments — garb, of course, that’s almost never worn outside the sanctuary, the sacristy or the doorway of the church as congregants depart.

It’s a howler to anyone familiar with Catholic life. But those in the know may choose to regard it as a bit of welcome, if unintended, comic relief.

(Editor’s note: No ratings given.)

Share This Post
movies, movie reviews, 'Godfather Coda'
See More
Last Article
For Father Cummings, priesthood adds up to meaningful life
Next Article
‘Concept of social justice is a Catholic one’
Back to Vermont Catholic Magazine