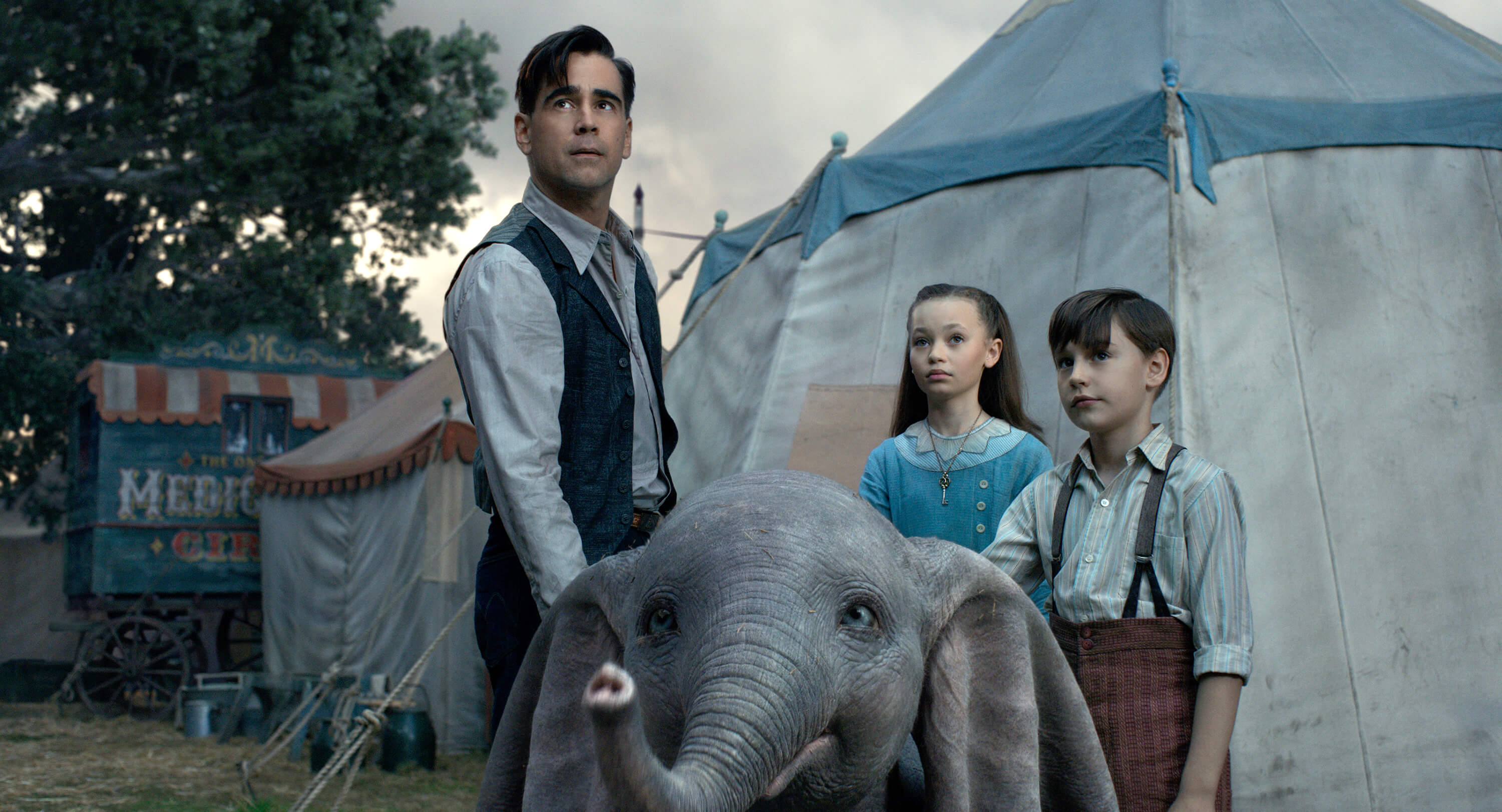 Photo Credit: CNS/Disney - Colin Farrell, Nico Parker and Finley Hobbins star in a scene from the movie "Dumbo." The Catholic News Service classification is A-II — adults and adolescents. The Motion Picture Association of America rating is PG — parental guidance suggested. Some material may not be suitable for children.

The sight of a cuddly baby elephant taking to the skies is clearly meant to send spirits soaring in “Dumbo” (Disney), director Tim Burton’s live-action reimagining of the 1941 animated classic.

But, though lush and a passable diversion, his film ultimately feels insubstantial. Constant peril, the mistreatment of animals and several sad plot developments, moreover, make it too challenging for little kids.

Colin Farrell plays circus horse wrangler Holt Farrier. Having lost an arm in World War I and his beloved wife to the influenza epidemic, Holt returns home in 1919 to find the fortunes of his small-time big top, run by Max Medici (Danny DeVito), sadly sagging. Max’s one ray of hope is the fact that a pachyderm he recently purchased is pregnant.

Once she gives birth, however, her offspring’s freakishly outsized ears leave Max convinced that the public will be turned off rather than attracted by the new addition. He gives Holt the task of disguising Dumbo’s deformity.

Holt’s two children, aspiring scientist Milly (Nico Parker) and preteen Joe (Finley Hobbins), can see beyond the apparent flaw. They feel an affinity with Dumbo, especially after his mother, having gone on the rampage in an effort to protect him, is sold back to her original owner. Their care for Dumbo is rewarded when they discover that his unusual auditory anatomy enables him to fly.

This singular talent attracts the attention of V.A. Vandevere (Michael Keaton), the owner of Dreamland, a lavish amusement park. To secure Dumbo for Dreamland, he makes Max his junior partner and hires Max’s entire troupe.

Yet, as the audience senses from the start, Vandevere is not to be trusted. His amiable girlfriend, acrobat Colette Marchant (Eva Green) — whom he treats as little more than an ornament to his lifestyle — is less devious and soon manages to catch Holt’s fancy.

Lessons about not judging by appearances as well as the example of Milly’s female empowerment as a would-be Marie Curie are wrapped up in these events. And Burton brings predictable visual flair to screenwriter Ehren Kruger’s story — Dreamland, for example is quite an eyeful.

But there’s a melancholy air to Dumbo’s orphaned plight that could easily upset tots. So, while free of genuinely objectionable material, his saga — which leaves little lasting impression — is best for older children and grownups.

The film contains characters in danger and cruelty to animals. The Catholic News Service classification is A-II — adults and adolescents. The Motion Picture Association of America rating is PG — parental guidance suggested. Some material may not be suitable for children.