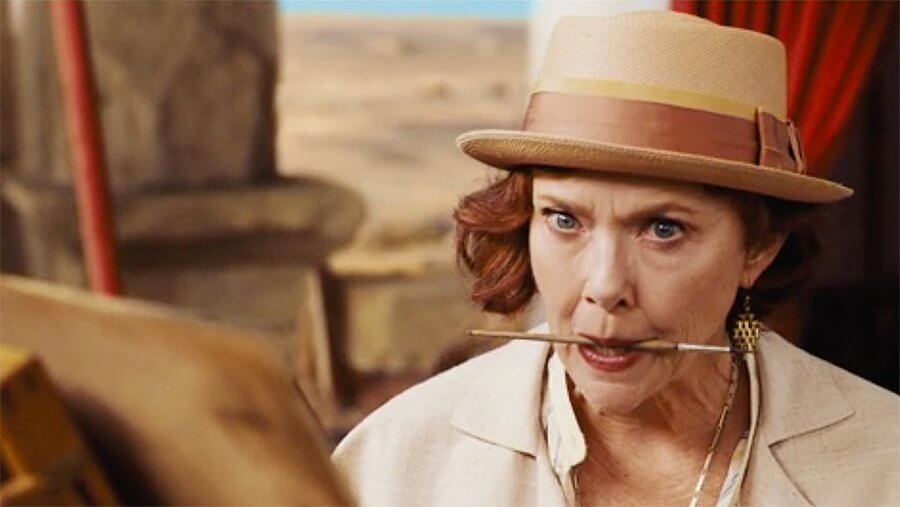 Photo Credit: CNS screen grab/20th Century Studios via EPK TV - Annette Bening stars in a scene from the movie "Death on the Nile."

Movie review: ‘Death on the Nile’

In 2017, Kenneth Branagh directed and starred in a generally satisfying adaptation of Agatha Christie’s classic Hercule Poirot mystery “Murder on the Orient Express.” Now, he reprises both roles as the precision-loving Belgian detective encounters “Death on the Nile” (20th Century).

The result is a visually elegant period piece — Christie’s novel was first published in 1937 — that gains heft from its reflections on the iconic sleuth’s past. Though, by its nature, unsuitable for kids, the movie is probably acceptable for older teens, despite some momentary forays into grim or otherwise mature subject matter.

Both Branagh’s Poirot films have prestigious big-screen predecessors looming in their backgrounds, the train trip having been helmed by Sidney Lumet in 1974, the Egyptian journey by John Guillermin four years later. Albert Finney played the proud owner of the “little gray cells” in the former picture, Peter Ustinov in the latter.

Up against such a formidable forerunner, screenwriter Michael Green introduces an original element with an opening flashback to Poirot’s service in World War I. This glimpse of his younger years serves both as an exploration of his hidden emotional life and as an origin story for his highly distinctive goatee — one well-calculated to silence those inclined to mock its (now somewhat reduced) baroque exuberance.

By contrast to this weighty backstory, early sequences introducing participants in the case shortly to be at hand feel skittish. By the time homicide rears its ugly head, however, things have settled down and an intriguing whodunit awaits.

Jacqueline’s stalking of the honeymooners may or may not be the cause of the fatal events that unfold during a cruise on the titular river that the couple undertakes in part to get away from her. In fact, possible suspects abound among their — and Poirot’s — fellow passengers on the excursion.

Among the discoveries that Poirot arrives at along the way to identifying the culprit(s) is that two other travelers on board constitute a same-sex couple. Predictably, this is dealt with in a manner much more in keeping with contemporary ideas than with those that prevailed between the wars.

Equally anachronistic is the twerking Jacqueline and Simon engage in on a night club dance floor previous to their breakup. Together with some preliminary grappling between Simon and Linnet later on, their era-inappropriate choreography introduces a brief whiff of raunchiness that — while not perhaps enough to make the Sphinx blink — still limits the apt audience for Poirot’s clever deductions.

Believers will be better pleased by the piety Poirot momentarily displays while trying to soothe Jacqueline’s resentment. A future without Simon, he tells her, might be the “life God intended” for her. It’s clear from the context that such acceptance of the divine will has not come easily to him, but that he has striven for it.

The film contains brief but intense combat violence, fleeting images of gore, scenes of sensuality, references to homosexuality, at least one use of profanity and several milder oaths. The Catholic News Service classification is A-III — adults. The Motion Picture Association rating is PG-13 — parents strongly cautioned. Some material may be inappropriate for children under 13.