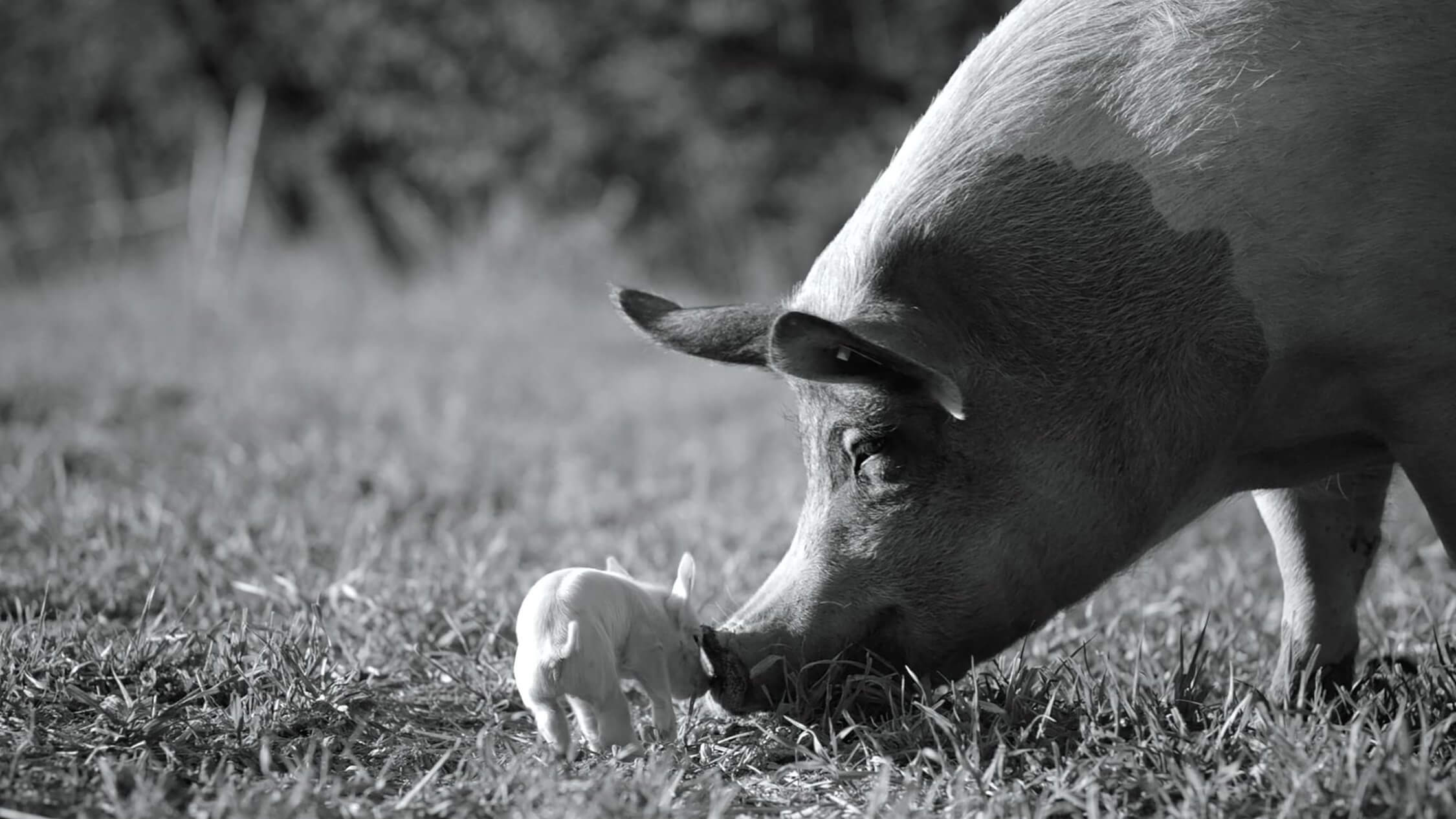 Photo Credit: CNS/courtesy NEON - Two pigs are shown in a scene from the documentary "Gunda."

The year just past must rank as the most tumultuous for the film industry at least since the scandal-ridden early 1920s — if not, as seems far more likely, ever. With movie theaters across the globe shuttered by Covid-19, box office receipts have plummeted, related stocks have followed suit and production has largely halted.

Throughout the crisis, however, releases have continued, and viewers have been treated to some films of quality — though gritty material has often come to the fore. As a result, it’s easier to assemble a list of 2020’s best screen offerings for a grown audience than for a broader one.

Following, in alphabetical order, are capsule reviews of the Top 10 movies overall and eight of the best family films of 2020 as selected by the Media Review Office of Catholic News Service.

Unless otherwise noted, the Catholic News Service classification of titles on the former list is A-III — adults and their Motion Picture Association rating is R — restricted. Under 17 requires accompanying parent or adult guardian. Similarly, the classification of films in the second category is A-II — adults and adolescents while their rating is PG — parental guidance suggested. Some material may not be suitable for children.

In the uplifting fact-based conversion story “Burden,” a veteran Ku Klux Klan member (Garrett Hedlund) falls for a more enlightened single mother (Andrea Riseborough) who eventually demands that he choose between his racist pals and his relationship with her. As he struggles with the consequences of renouncing his allegiance to the local Klan leader (Tom Wilkinson), whom he has long regarded as a father figure, he comes under the healing influence of an African American minister (Forest Whitaker). Writer-director Andrew Heckler’s drama is rich in Gospel values and offers an inspiring reminder of the power of long-suffering, courageous, charitable love.

A rich but harrowing drama, “Da 5 Bloods” follows a quartet of Vietnam War veterans (Delroy Lindo, Clarke Peters, Norm Lewis and Isiah Whitlock Jr.) as they return to Indochina, partly to retrieve the body of a fallen comrade (Chadwick Boseman) they revered as a mentor but also to recover a cache of CIA gold they discovered during the conflict. Their journey becomes both a nightmare and a springboard for director Spike Lee’s far-ranging reflections on race relations, politics, faith and the corrupting effects of greed. Lee’s creative daring as his film reaches its climax combines with a wrenching performance from Lindo to deliver a searing emotional payoff. (The CNS classification is L — limited adult audience, films whose problematic content many adults would find troubling.)

“Emma” is a delightful screen version of Jane Austen’s classic novel in which the young British gentlewoman of the title (Anya Taylor-Joy) tries her hand at matchmaking on behalf of a fortuneless friend (Mia Goth) while flirting with a visitor (Callum Turner) to her small country town and repeatedly locking horns with an old friend (Johnny Flynn). Director Autumn de Wilde’s feature debut abounds in painterly elegance and captures perfectly Austen’s droll insights into human nature. (The MPA rating is PG — parental guidance suggested. Some material may not be suitable for children.)

Director Kelly Reichardt’s historical drama “First Cow” is adapted from Jonathan Raymond’s 2012 novel “The Half-Life.” In the Pacific Northwest of the 1820s, two outsiders (John Magaro, Orion Lee) seek their fortunes marketing “oily cakes,” doughy concoctions that make all who consume them dream of their childhood homes. The catch is, the only way to make this opportunity for themselves is by stealing milk from a rich man’s (Toby Jones) cow. A sharp examination of capitalism and entrepreneurship combines with a sympathetic look at the plight of the marginalized to produce a piece of minimalist poetic glory. (The Motion Picture Association rating is PG-13 — parents strongly cautioned. Some material may be inappropriate for children under 13.)

In “The King of Staten Island,” a directionless slacker (Pete Davidson) still trying to come to terms with the long-ago death of his fireman father finds his life transformed when his mom (Marisa Tomei) begins dating another firefighter (Bill Burr) with whom he at first butts heads but eventually discovers common ground. Below the crust of vulgar behavior and language overlying director Judd Apatow’s ultimately moving conversion story lies a salute to such positive values as the dignity of work, the importance of emotional connection and the heroism of first responders. (L)

Set in a rundown Paris suburb with a large community of Muslim immigrants, director Ladj Ly’s drama “Les Miserables” traces the slow breakdown of its public order via a single day in the work of a three-man street crime unit (Damien Bonnard, Djebril Zonga and Alexis Manenti). After a boy (Issa Perica) with a talent for theft is accidentally shot by the cops, they have to keep him out of sight while they hunt for the memory card of a drone camera owned by another lad (Ly’s son, Al-Hassan) that recorded the incident. The film delivers a powerful message about bigotry, suspicion and the abuse of power.

“News of the World” is an epic adventure, set in 1870 Texas, in which a Confederate veteran (Tom Hanks) accidentally becomes the temporary guardian of a 10-year-old orphan girl (Helena Zengel) and reluctantly undertakes a journey of hundreds of miles to deliver her to her only surviving relatives. Director Paul Greengrass’ visually expansive yet emotionally understated screen version of Paulette Jiles’ 2016 novel explores the ethnic, sectional and economic tensions of the Reconstruction era as well as the redemptive bond uniting two victims of personal tragedy. (PG-13)

A commendable sensitivity to both the inanities and the unrelenting raw horror of combat as well as careful attention to the emotional lives and steadfast valor of soldiers make the drama “The Outpost” a contender for the status of a classic war film. Director Rod Lurie recounts the 2009 Battle of Kamdesh in Afghanistan during which 300 Taliban fighters overran a remote post at which 53 Americans were based. The camaraderie of the imperiled (most prominently Scott Eastwood, Caleb Landry Jones and Orlando Bloom) provides an elegant form of inspiration that doesn’t require speeches or flag-waving.

Director Gavin O’Connor’s sports drama “The Way Back” tells a story of hope and redemption after devastating loss. When the basketball coach at the Catholic high school he attended suffers a heart attack, a former hoops star-turned-alcoholic-construction-worker (Ben Affleck) reluctantly agrees to take over the program. As he exerts a positive influence on the players (most prominently Brandon Wilson and Melvin Gregg), he finds a new sense of purpose and begins to heal.

In “Words on Bathroom Walls,” a teen (Charlie Plummer) suffering from schizophrenia must transfer from his public high school to a Catholic academy where he tries to fit in while coping with the effects of his affliction on his relationships with his loving mother (Molly Parker), her apparently hostile live-in boyfriend (Walton Goggins) and a newfound pal (Taylor Russell) he would like to make his girlfriend. Director Thor Freudenthal’s adaptation of Julia Walton’s 2017 novel poignantly depicts the beleaguered lad’s numerous challenges. Viewers of faith will appreciate that, along with Mom, a school chaplain (Andy Garcia) provides the film’s moral compass. (PG-13)

Jack London’s beloved 1903 novel returns to the big screen in the computer-generated special effects extravaganza “The Call of the Wild.” A pet St. Bernard-Scotch Collie mix dog is kidnapped from his California owner (Bradley Whitford) and shipped to the Yukon, where gold fever is raging, and large canines are in demand to pull sleds. There he is successively owned by two benevolent mail carriers (Omar Sy and Cara Gee), a wicked gold prospector (Dan Stevens) and a kindly explorer (Harrison Ford). Director Chris Sanders’ film is a highly entertaining comedy-drama with solid messages about love, friendship and respect.

Intended as a revisionist origin story for J.M. Barrie’s Peter Pan and Lewis Carroll’s Alice, the intriguing if slightly schizophrenic fairy tale “Come Away,” directed by Brenda Chapman, is mostly wholesome, family-friendly fare. In the idyllic English countryside, three carefree siblings (Keira Chansa, Jordan Nash and Reece Yates), encouraged by their loving parents (Angelina Jolie and David Oyelowo), revel in battling make-believe pirates and hosting tea parties with plush toys. But after tragedy strikes and a secret problem is revealed, two of the children embark on a perilous journey to London to find a solution, encountering versions of a variety of fictional characters along the way.

Director Joel Crawford’s sequel “The Croods: A New Age” is a spirited, fun-filled animated comedy suitable for almost all ages. A Stone Age couple (voices of Nicolas Cage and Catherine Keener) and their three children (voices of Emma Stone, Clark Duke and Kailey Crawford) join a teenage boy (voice of Ryan Reynolds) on a perilous quest for a safe haven. They reach an oasis of tranquility and abundance run by an “evolved” Neanderthal family (the parents voiced by Peter Dinklage and Leslie Mann, their adolescent daughter by Kelly Marie Tran). A culture clash ensues, though it leads eventually to mutual respect and appreciation.

“Gunda,” filmmaker Victor Kossakovsky’s compelling 93-minute documentary about animal life on the farm, offers an intimate view of the eponymous sow and her piglets, devoid of dialogue and human actors. Hidden cameras capture the intimacy and simplicity of the daily routine of a porcine family, revealing a surprising intelligence and a range of “emotions,” including joy, anger and sorrow. What unfolds in glorious black-and-white cinematography is as unexpected as it is mesmerizing and can be enjoyed by the entire family. (The CNS classification is A-I — general patronage. The MPA rating is G — general audiences. All ages admitted.)

Of the numerous film adaptations of Charles Dickens’ autobiographical 1850 novel, “The Personal History of David Copperfield” may rank as the happiest. As directed by Armando Ianucci, it finds Copperfield (Ranveer Jaiswal and Jairaj Varsani as a boy, Dev Patel as a man) facing life’s challenges with a hero’s grace and the joy of a secular saint. Multi-ethnic casting emphasizes the point that stories about human survival and ambition are universal while Dickens’ sense of morality and belief that pure unselfish love and loyalty sustain lives remain unscathed by time.

Filmmaker Jonathan Cipiti’s moving documentary “Pray: The Story of Patrick Peyton” chronicles the life of the titular Holy Cross father (1909-1992), founder of the Family Rosary movement and tireless advocate of strengthening marital and familial ties through prayer of all kinds. It’s a fine account of a naturally shy man whose spiritual fervor drove him to reach out to the elite of Hollywood as well as to the massive crowds he would address in rallies around the world.

Directed by Marc Munden, “The Secret Garden” is the fourth big-screen version of the 1911 children’s novel by Frances Hodgson Burnett. An orphan (Dixie Egerickx) is taken in by her uncle (Colin Firth), a grieving widower, and supervised by his no-nonsense housekeeper (Julie Walters). She accidentally discovers the enclave of the title whose curative whimsy she hopes will heal her sickly, bedridden cousin (Edan Hayhurst), if only she and a newfound friend (Amir Wilson) can succeed in somehow bringing him there. Bolstered by magnificent visuals, the film deals effectively with themes of grief, isolation, discovery, imagination and love of family.

In the animated sequel “Trolls World Tour,” the pair at the center of the first story — the ever-optimistic queen (voice of Anna Kendrick) of the pop-music trolls and her more fearful best friend (voice of Justin Timberlake) — discover that there are other nations of their kind, each dedicated to a particular genre of melody and that the malicious sovereign (voice of Rachel Bloom) of the hard-rock tribe is out to conquer or destroy all the rest. With its psychedelic palette, upbeat energy and fun interludes of song, returning director Walt Dohrn’s adventure is a delightful diversion, one that also carries lessons about tolerance, respect for differing identities the power of self-sacrificing love.