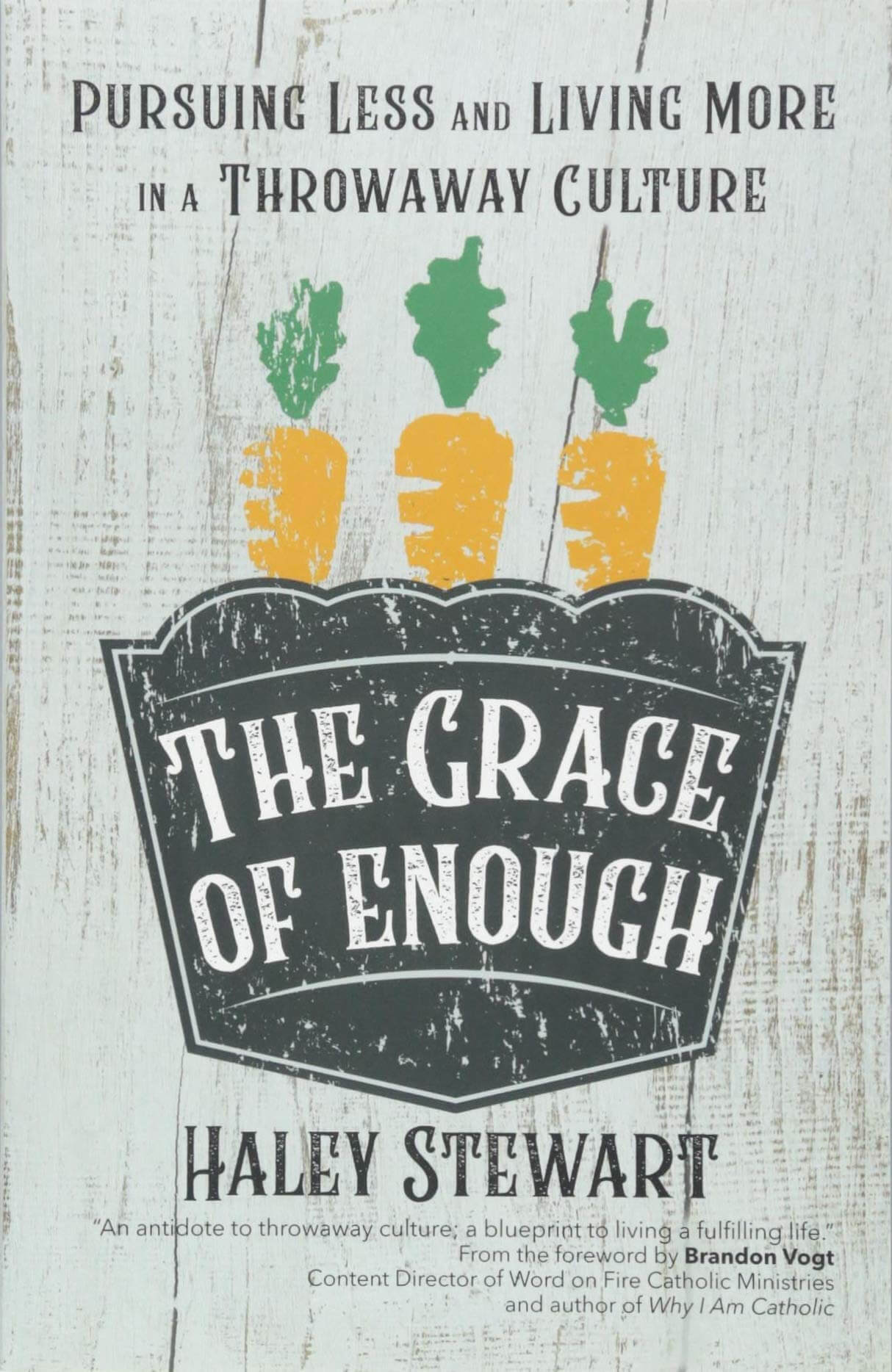 Book review: ‘The Grace of Enough’

There has been an interesting movement of late — at least in some parts of our culture — toward a lifestyle less driven by rampant consumerism and more devoted to purposeful simplicity. It seems that the happiness promised by the accumulation of money, status and “things” has been disappointing at best, and some people now find themselves actively pursuing an alternative way of life that is both rewarding and meaningful.

Haley Stewart’s new book, “The Grace of Enough: Pursuing Less and Living More in a Throwaway Culture,” offers a Catholic perspective on this issue. While the choice that Stewart, her husband and three children made — to spend a year in a “650-square-foot apartment on a working farm with no flushing toilets in central Texas, several states away from family” — is not for everyone, the principles of faith that guided their decisions can be implemented by anyone. And the rewards, Stewart says, “are…relationship-centered community, a strong connection to the natural world, and the prioritization of leisure and festivity over production and efficiency. These things are completely opposed to our throwaway culture and compatible with the Gospel, and they can be lived out wherever you are.”

Getting to this point, however, was not an easy journey for them. Like many young families, the Stewarts had become caught up in a lifestyle that demanded more and more of their time and resources, yet gave them little satisfaction. As both she and her husband worked longer and longer hours just to provide for basic needs, they found themselves spending less and less time together as a family. For the Stewarts, the American dream was beginning to take on the trappings of a nightmare. “There’s certainly a catch-22 in the American pursuit of affluence,” she noted. “We work more so we can achieve the dream of having a nice house to enjoy. But working more means we have less time to be at our home enjoying it. We want to provide our children with prosperity but end up depriving them of what they actually need and desire — time with us.”

As relatively new converts to Catholicism, they decided to turn to the values of their faith to find a different way forward. The first thing they did was pray to discern what God was calling them to. Then, after “thoughtful planning, a lot of work, and a willingness to sacrifice comfort,” they made the decisions that fulfilled that call and worked for them as a family.

As Stewart tells the story of how her family discovered “the grace of enough” she guides readers through the process of reflection that they also relied on. Thoughtful discernment questions, which can be used either by individuals or in a group setting, are provided both at the end of every chapter as well as at the end of the book. A list of resources also is available if readers want to go deeper into any of the topics discussed.

Throughout her book, Stewart makes it clear that the family’s Catholic faith was at the center of each decision they ultimately made; she also warns that this journey, while spiritually rewarding, will lead those who take it on a very different path than the one the world presents. “This book isn’t a manual or a checklist that requires conformity,” Stewart concludes. “It’s a series of reflections on how Daniel and I sought to develop a posture of intentional living as Christians and caretakers of the land and lives we’ve been given. My prayer is that those ideas will be applicable to anyone desiring to be anchored with these deep Gospel truths rather than being swept away in the current of consumerism and secularism.”

Haley Stewart is a Catholic author, podcaster and speaker who previously served as publications specialist and project coordinator at The Center for Christian Ethics at Baylor University.

She coauthored “Feast! Real Food, Reflections, and Simple Living for the Christian Year” with her husband, Daniel. She has contributed to America magazine and has appeared on CatholicTV, Relevant Radio, The Catholic Channel on SiriusXM Radio and Real Life Radio.

She lives with her family in Waco, Texas.