Book review: ‘MicroShifts: Transforming Your Life One Step at a Time’ 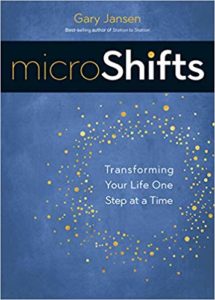 Have you ever stood in front of a cluttered garage and thought to yourself, “There’s no way I want to tackle that job. It’s too big; it’ll take too much time and frankly, it’s too hard to do.” So off you go to do something else that is probably easier and/or more pleasant, while the garage remains in the same state of chaos that drove you away from it in the first place.

Gary Jansen’s newest book, “MicroShifts: Transforming Your Life One Step at a Time” sounds, in a way, like a guide that could help tidy that garage except that it wrestles with something far more important, but often just as difficult to deal with – our spiritual lives.

And for those who say “Well, I don’t really have much of a spiritual life,” Jansen will set you straight in the first few pages. Following in the footsteps of St. Ignatius of Loyola, he asserts, “I’ve come to see that everything has a spiritual component: our jobs, families, relationships, suffering, finances, health, emotions, disappointments, joys, and sorrows. This means that the love you feel for your spouse or partner is spiritual. The fear you have when you look at your bank statement is spiritual. An unexpected pregnancy is spiritual. The anxiety you experience when you’re worried about your teenage son and his friends is spiritual, as are the sometimes rocky relationships you have with your friends and colleagues. It also means that there is a spiritual element to political conflict, social revolutions, the environment, and even the jerk at the supermarket who rammed his cart into the back of your foot and was rude to the tired checkout clerk.”

As the title promises, Jansen does not challenge his readers to change everything at once; what he shows instead is how, in the words of Mother Teresa, “doing small things with great love” can accomplish something that borders on the miraculous. “A MicroShift,” he explains, “is a small change in the way we do things, in the way we perceive life, in the actions we take, or in the way we understand our feelings and emotions.” What is refreshing about his suggestions is that none of them are particularly complicated; in fact, some encourage us to do the simple commonsense things that we’ve known all along will make our lives better. Look, for instance, at the subject of all of chapter three – Get Some Sleep. “As for my own experience,” he says, “I can see that so much of what I struggled with in my spirituality may in fact have been directly connected to poor sleep patterns. St. Augustine famously wrote that our hearts are restless until they find rest in God. Maybe he meant rest to include its literal sense.”

Some of his advice is a new take on an old stand-by. For instance, we have all come up with to-do lists, but have you ever considered a “To-Live” list? Jansen did, and he shares how just that little bit of direction made a marked difference on how he lived.

Jansen’s suggestions are quite specific; for instance, at the end of the book he lists “42 MicroShifts That Will Change Your Life for the Better,” many of which can be done in as little as an instant. Though all of them are good, my favorite involves just how to listen to another person: “When someone is talking, let him or her know that you’re listening,” he says.  “People need to be heard. Listen and — this part is important — refrain from offering your opinion unless it is requested. … When you do respond, make it about what they have said rather than something similar that happened to you.”

Easy to read and thoughtful to ponder, Jansen’s advice is well worth the price of this book; recommended for anyone seeking to make meaningful changes in his or her life.

Gary Jansen is the director of Image Books and an executive editor at Penguin Random House, where he has edited and published books by New York Times best-selling authors Pope Benedict XVI and Pope Francis.

He is also the author of the best-selling memoir “Holy Ghosts: Or, How a (Not So) Good Catholic Boy Became a Believer in Things That Go Bump in the Night,” “The 15-Minute Prayer Solution,” “Station to Station” and “Life Everlasting.”