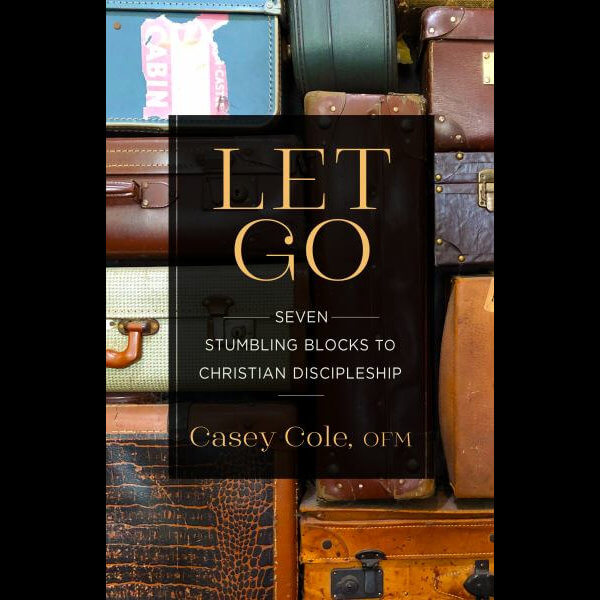 If you are not ready for real, serious change in your life, then you might want to put this book down until you are.  In “Let Go: Seven Stumbling Blocks to Christian Discipleship,” Father Casey Cole, OFM gets to the heart of what Jesus means when He calls us to be His disciples.  Beginning with the Gospel story of the rich young man who asks in all sincerity, “What must I do to inherit eternal life?” Father Cole challenges each of us to ask and answer that same question for ourselves.  The path he outlines in these pages is deceptively simple; however, for us, as it was for the rich young man, we discover that it is going to be far from easy.

Father Cole presents seven different areas for consideration, although as he states at the beginning, that list is far from exhaustive.  “What I provide here,” he says, “…is a primer for the pump.  What I want from this book is for people to look at their lives and ask themselves, ‘What would Jesus ask me to let go of in order to follow Him?’” It may be material things, as it was for that young man, but it could also be something else entirely.

A quick glance at the table of contents may result in an “Aha!” moment for some, a recognition of something that has been weighing heavily for a long time, whether we’ve acknowledged it or not.  We may be struggling with our sense of self, the subject of chapter one, or expectations, which is discussed in chapter two. Chapter three talks about anxiety, while four centers on comforts. In chapter five we are invited to look closely at our wounds, and in six we are asked to consider our enemies. The seventh and final chapter looks at our relationship to power. Each explores, not our big and glaring sins, but “…the ordinary events of our lives, the day-to-day interactions that often do not get the attention they deserve,” Father Cole says.

Although the focus is not necessarily on sin, the number seven does, ironically, coincide with the traditional number of deadly sins.  Which brings us to the reason why this book is both powerful and difficult; “Anything,” Father Cole emphasizes, “that prevents us from following Jesus with our whole heart, anything that holds us back, is a stumbling block to Christian discipleship as deadly as sin.”

As an example of what he is talking about, let’s take a look at the final chapter.  When we encounter the word “power,” we are probably inclined to think, “Nope.  That’s not me.  If anything, I am at the mercy of the power of others.”

But are we?  If we are honest, might we not have areas in our lives that we try to control with an unreasonable iron grip? Father Cole goes on to illustrate for us the kind of power he is talking about.  “I’m talking about the person,” he says, “who has done something one way for decades and throws a tantrum if anyone dares mess with his or her system. … There may be a more efficient way to do something … but it doesn’t matter.  The person in charge of that task is in charge, and no one is going to question their authority. This is my kingdom.”

By the end of the book, I was beginning to understand a bit better how that rich young man must have felt.  What we will be asked to let go of in order to be Jesus’ disciples will be unique to each of us, but no matter what it is, it will be just as challenging to us as those possessions were to him.  And the stakes will be as high.  As Father Cole reminds us at the close of his book, “Our eternal lives are on the line. … Let go. Right now.”

Father Casey Cole, OFM is a vowed religious in the Franciscan Order with a degree in religious studies and a minor in poverty studies from Furman University. In 2017 he professed his final vows as a Franciscan and was ordained a priest in June 2019. He works extensively on social media, evangelizing and catechizing through YouTube videos, podcasts, and blog posts. He is currently the campus minister of the Catholic Center at the University of Georgia.