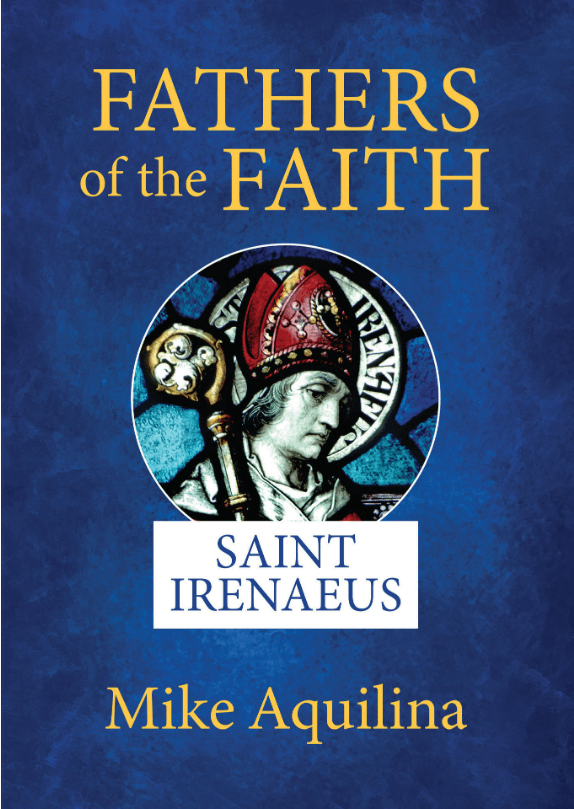 In the second volume of Our Sunday Visitor’s “Fathers of the Faith” series, author Mike Aquilina gives us a portrait of a man who, until quite recently, may not have been a household name in the 21st century – St. Irenaeus of Lyon. The fact that many people may not have heard of him does not take away from his importance to the faith, a reality which was confirmed in January  when Pope Francis officially declared him a Doctor of the Church.

In this particularly accessible volume, Aquilina brings this saint to life in a way that is neither ponderous nor pietistic. “A young man is hurrying through the market,” he begins, and from that point on we are following the life and teachings of a most remarkable man living in most remarkable times.

One of the first things that Aquilina points out is that much of Irenaeus’ authority actually derives from his unique place in the timeline of human history. That young man he mentions in the book’s first line — who is of course, Irenaeus — is rushing to hear the words of another saint – Polycarp. And it is what Polycarp is speaking of – what he knew of and learned directly from the Apostle John — that mesmerizes the young man. He is amazed to be in the presence of someone who was a friend of a friend of Jesus Himself. This proximity to the Apostles and the apostolic tradition is what would set the stage for all that Irenaeus would later become.

This connection was significant enough that Aquilina moves directly into a discussion of Polycarp, one of the last of  the “Apostolic Fathers,” or those disciples who learned about Jesus and His teachings directly from the Twelve. When in the course of his life Irenaeus found himself refuting and doing battle with the heretics of his time, it was this foundational tradition that he was grounded in. Indeed, one of the works which survives and for which he is best known is entitled “Against Heresies.”

As far as 21st-century Catholics are concerned, this book not only teaches about Irenaeus but is also a primer in some of the most pernicious false doctrines of the early Church. Perhaps the one most closely associated with this saint is the teaching known as Gnosticism, a rather confused jumble of jargon which maintained that, as Aquilina explains, “the created universe was the work of an inferior being and that Christ came to introduce us to the greater God who would rescue us from creation.” They also believed in “’secrets’ passed down in a hidden way from one teacher to another.” Of course, it was only the elite who were privy to such information.

Though dealing with a serious threat to the apostolic tradition and the truth, Irenaeus’ refutation impales his opponents with wit and satire as much as it does invective. In the chapter entitled “Why You Wouldn’t Let Your Daughter Date a Gnostic,” Aquilina echoes the saint’s witty approach to great effect.

“The Long Con of Simon Magus” tells of an individual who appears in the Acts of the Apostles, but who Irenaeus shows us later going completely off the rails. As Aquilina says, Irenaeus exposes how “(Simon) twisted the teachings of Christ and the explanations of Paul to make a very attractive do-what-you-like religion, with himself as the object of worship – and presumably the destination of believers’ money too.”

Although it is suggested in the introduction that at the completion of this book readers may want to tackle the writings of Irenaeus himself, Aquilina gives us a complete enough picture to understand why it was so important to finally declare this saint a Doctor of the Church – although it took some 1,800 years to do so.

Mike Aquilina is author or editor of more than 30 books, including “The Fathers of the Church,” “The Mass of the Early Christians” and “A Year with the Church Fathers.” He has co-hosted eight series that air on the Eternal Word Television Network and co-authored books with theologian Scott Hahn and Cardinal Donald Wuerl. He and his wife, Terri, have six children, who are the subject of his book “Love in the Little Things.”