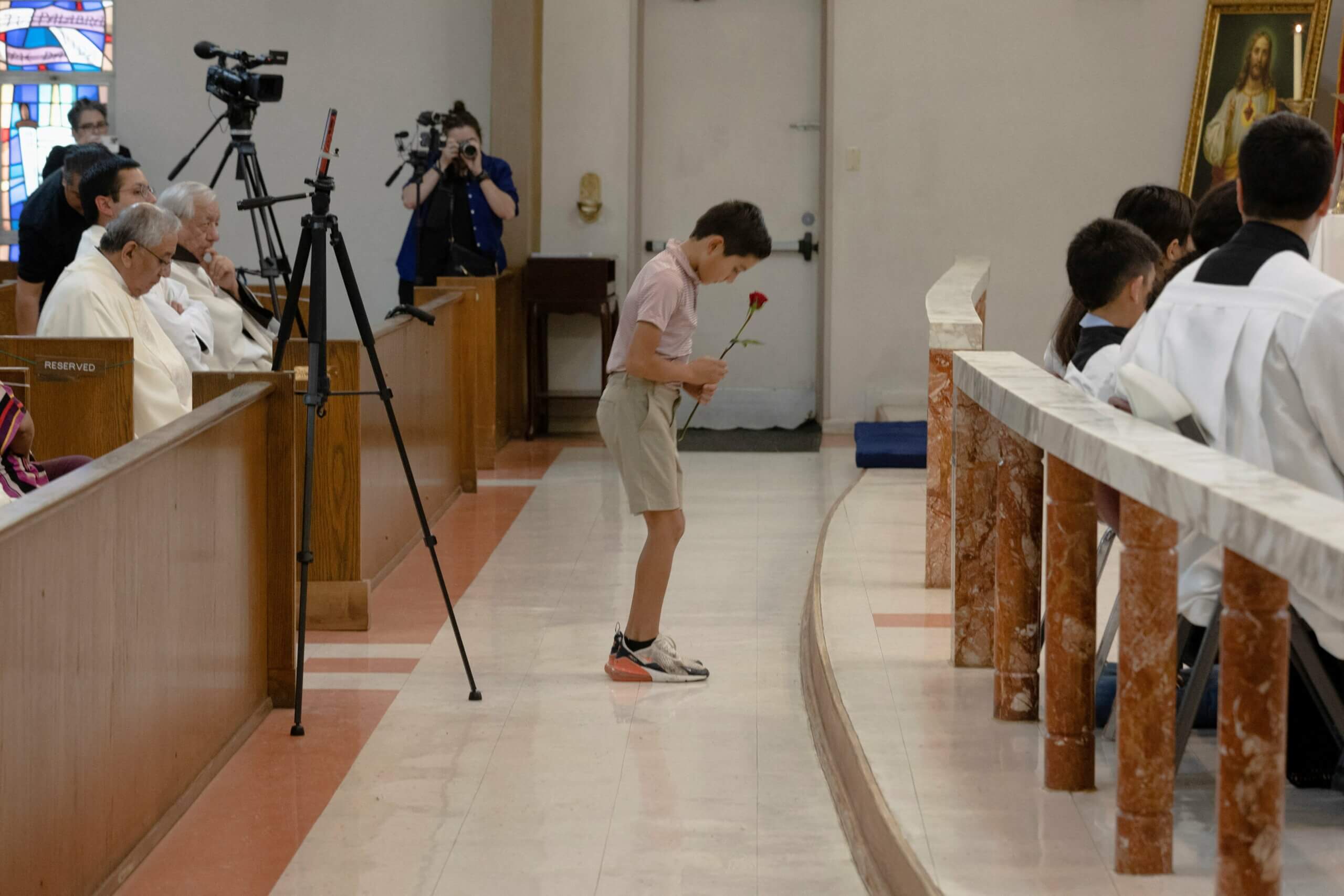 Photo Credit: CNS/Nuri Vallbona, Reuters - A boy at Sacred Heart Catholic Church in Uvalde, Texas, presents a flower in memory of a shooting victim during Mass May 25, one day after a gunman killed 19 children and two teachers at Robb Elementary School.

Various orders of women religious said that lamenting the May 24 mass killing of 19 children and two of their teachers in Uvalde, Texas, also should accompany action so that it doesn’t happen again.

From the Sisters of Mercy to the Sisters of the Good Shepherd, a number of orders called on the public to push politicians on gun control laws after the mass shooting.

“God does not move mountains alone. God works through us. We are God’s tools. We are God’s clay,” Fran Eskin-Royer, executive director of the National Advocacy Center of the Sisters of the Good Shepherd, said in a May 25 statement.

“Surely there is a multitude of reasons for each act of violence — racism, mental illness, broken relationships. But one common element more often than not is the use of guns. We do indeed have a gun problem in America. There are too many guns and they are too easy to get,” Royer said.

“If we as a nation are ever to heal and if we are ever to reduce or eliminate these massacres,” she said, “we must enact gun control. We must use the laws already on the books and we must pass additional commonsense legislation such as strengthening background checks and banning assault weapons.”

“Even as we offer solidarity through lament and prayer, we refuse to accept a world in which thoughts and prayers are offered without meaningful policy change to address the crisis of gun violence in this country,” said the Sisters of Mercy of the Americas in a May 25 statement.

“While we grieve alongside the families and community in Uvalde and those still grieving in Buffalo,” they added, “we renew our call on state legislatures and Congress to enact more comprehensive laws limiting access to deadly weapons.”

The statements came after a May 25 news conference from authorities in Texas, attended by Republican Texas Gov. Greg Abbott, which focused on mental health issues and shied away from gun control.

“Thoughts and prayers alone are no longer acceptable for people of faith and goodwill.  We must act to bring an end to such senseless violence,” said Mercy Sister Mary Haddad, president and CEO at the Catholic Health Association of the United States.

The organization, along with others, has urged Congress to provide $35 million for the U.S. Centers for Disease Control and Prevention and $25 million for the National Institutes of Health to conduct public health research into firearm morbidity and mortality prevention.

“In light of the senseless loss of lives in Uvalde and Buffalo, we urge Congress to act quickly and authorize funding that bolsters research into this critical public health issue,” Sister Haddad said.

But a day after the shooting, many Republicans, whose votes are needed to pass gun safety legislation, seemed resistant.

“None of these things we’re talking about seems to change the outcome, before these most recent cases. I doubt if any Republicans vote for that,” Sen. Lindsey Graham, R-S.C., told The New York Times.

“I’m willing to say that I’m very sorry it happened. But guns are not the problem, OK? People are the problem,” said Sen. Tommy Tuberville, R-Ala. “That’s where it starts — and we’ve had guns forever. And we’re going to continue to have guns.”

The newspaper published how much each lawmaker opposed to gun control legislation has received from the National Rifle Association, as well as its rating for their support of the gun industry.

The General Council of the Adrian Dominican Sisters of Michigan pointed out that “a majority of Americans support commonsense restrictions on gun ownership.”

“We call on members of Congress to take immediate action to do just that: Enact legislation that bans access to militarized assault weapons with high-capacity ammunition magazines, provides for background checks and restricts concealed weapons, among other steps,” the organization said.

National polling on the issue at the end of 2021 showed that majority of Americans, 52 percent, said they wanted stricter gun control, according to a Gallup poll.

A 2022 survey from Pew Research Center said that just 38 percent of Americans agreed with Republicans on gun policy. But Republicans have largely relied on their home constituencies as their guide as to how to vote, not on national opinion.

“Most would probably throw me out of office,” Sen. Kevin Cramer, R-N.D., told the Times on what would happen if he supported gun control legislation.

If that’s the case, the Association of U.S. Catholic Priests, who also joined the women religious in its calls, said voters should make an effort to have those politicians removed from office.

“Indeed, our courts and legislatures should be able to develop solutions that do not violate anyone’s constitutional rights, including the right to live granted by the 14th amendment. We call on our elected and appointed officials to do so.  If they cannot, we need to replace them,” said the organization in a statement.

May 26 brought more bad news to Uvalde as the husband of Irma Garcia, one of the two teachers killed in the shooting, suffered a heart attack and died. They had been married for 24 years.

San Antonio Archbishop Gustavo Garcia-Siller, who has been tending to those in the Uvalde area, confirmed the news in a tweet May 26.

“Her husband Jose died today of a massive heart attack. Today, Mass at 6pm Sacred Heart Church, Uvalde,” he tweeted. “We pray for his soul and for their beautiful children. Pain increases so love. Jose, Rest In Peace.”