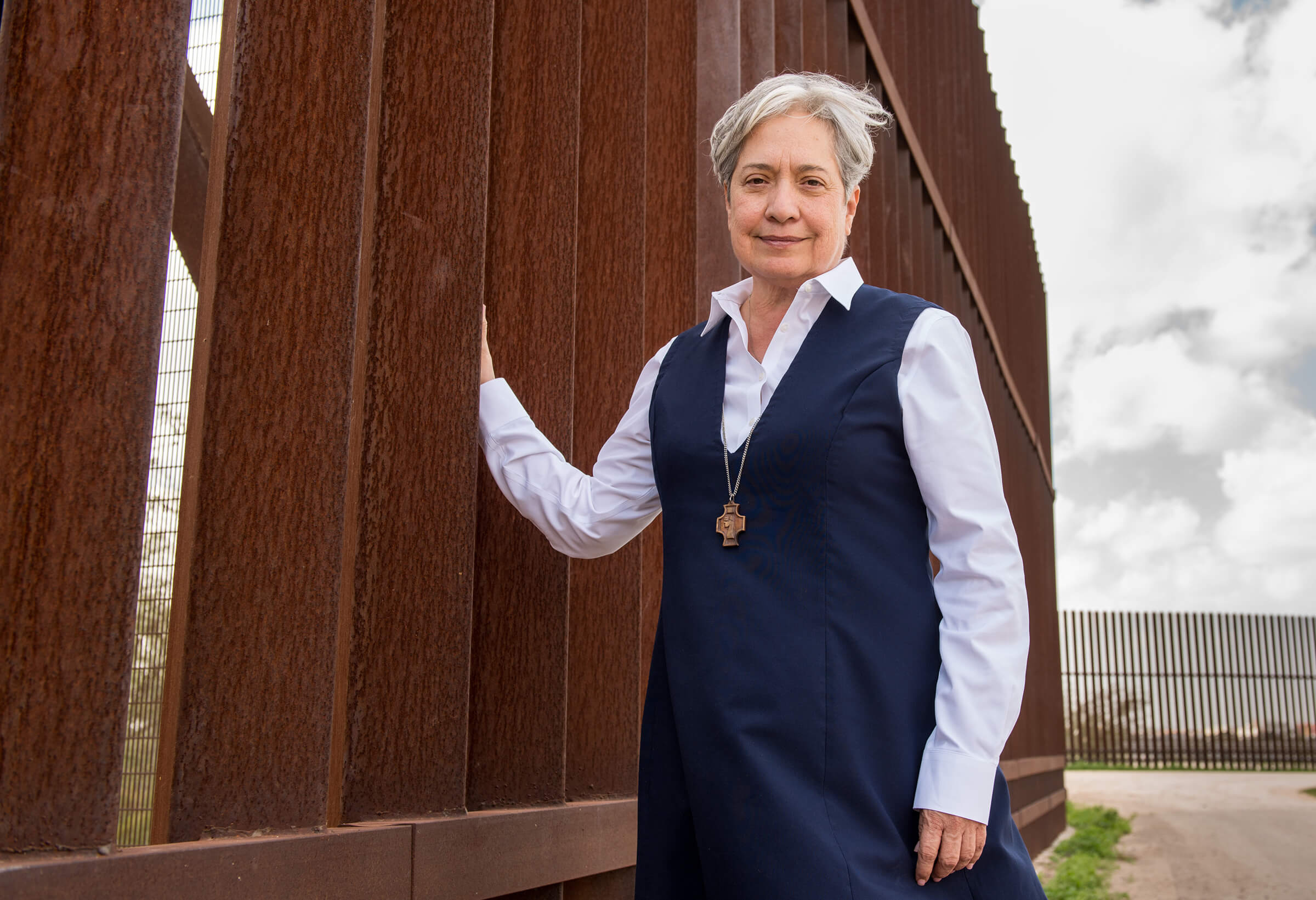 Photo Credit: CNS/Barbara Johnston, courtesy University of Notre Dame - Sister Norma Pimentel, a member of the Missionaries of Jesus, is pictured along a border wall between Texas and Mexico in late February 2018. Sister Pimentel, executive director of Catholic Charities of the Rio Grande Valley, has received national honors for her work with immigrants, but in remarks Feb. 2 in Washington, D.C., she told people at the Catholic Social Ministry Gathering she doesn't do anything different than what they do.

‘What I do is no different than what you do,’ says award-winning sister

Although her work along the Texas-Mexico border has brought her fame and celebrity, Sister Norma Pimentel, a member of the Missionaries of Jesus, who is executive director of Catholic Charities of the Rio Grande Valley, shrugged that off as best she could Feb. 2 in Washington.

“What I do and what I’ve done is no different that what you all do,” Sister Pimentel told a rapt audience at a Feb. 2 dinner where she was given the Sister Margaret Cafferty Development of Peoples Award by the Catholic Campaign for Human Development.

“It’s our mission — what we accomplish together — that makes it happen,” Sister Pimentel added.

CCHD, the U.S. bishops’ domestic anti-poverty agency, confers the award each year during the Catholic Social Ministry Gathering. This year’s gathering, Feb. 2-5, was co-sponsored by CCHD and seven other departments at the U.S. Conference of Catholic Bishops in collaboration with 15 other national Catholic organizations.

Sister Pimentel told the story of how her work with immigrants in the U.S. without legal permission came to be in 2014.

“I was going to the bus station and thinking, ‘This is just for a couple of days,'” she recalled. She went to nearby Sacred Heart Church in McAllen, Texas, in the Brownsville Diocese, and asked the pastor, “Let me borrow your parish hall for just a couple of days, Father Tom.”

“Three years later we had to give it back to Father Tom.”

But it was the priest’s “Yes, Sister,” that stuck out most.

“When do you hear a priest say, with no questions asked, ‘Here’s your parish hall’? It has to be God who made the stars aligned for all of us,” Sister Pimentel said.

So much attention has come her way since her work on the border began, including a worldwide satellite broadcast in 2015 — shown in the U.S. on ABC — in which Pope Francis applauded her for her ministry. Sister Pimentel later met the pope in Italy.

She serves as a consultant to the U.S. bishops’ Ad Hoc Committee Against Racism. She testified before the U.S. Commission on Civil Rights on civil rights in immigration and detention facilities, and spoke on women and dignity at the United Nations in 2015.

In the past year, Sister Pimentel won the Keep the Dream Alive award from Catholic Charities USA, and the Laetare Medal from the University of Notre Dame. She also was nominated for Texan of the Year. “As a native Texan I know what a wonderful award that has to be,” said CCHD executive director Ralph McCloud. “Texas is a big state.”

“What we were doing in that shelter in McAllen, Texas, is helping thousands of families who arrive and have arrived. To date we have helped 125,000 people,” Sister Pimentel said to applause.

“What is amazing,” she added, “is the response of all of us together. Those first couple of days at the hall at Sacred Heart, you saw dads, moms, families helping each other, helping children who needed help.”

The response grew from there.

“A city official walks in that night and he was wondering what’s going on? So he asked, ‘Sister Norma, what’s going on here?’ I turned back and I tell him, ‘We’re restoring human dignity. That’s what we’re doing.’

“I don’t think he expected me to say that,” Sister Pimentel said.

But her response sold him. He then asked her, “If I had a magic wand, what would that wand do for you?” She thought and replied, “Showers.” “Sure enough that night we had a trailer with eight showers.”

The city official then told the mayor, “We need to help Sister Norma. What she’s doing, we need to be doing.”

And as the immigrants keep coming, so do the volunteers: people from town and the surrounding area, retired sisters who stay for two weeks and a phalanx more.
“You see this transformation begin to start,” Sister Pimentel said, “the dignity that is so important in each person’s life.”

She added, “It’s a very important transformation for us as well.”

“At the end of the day, you leave here exhausted, but you leave here with a sense of accomplishment. Helping another human being is never a wrong thing to do.”