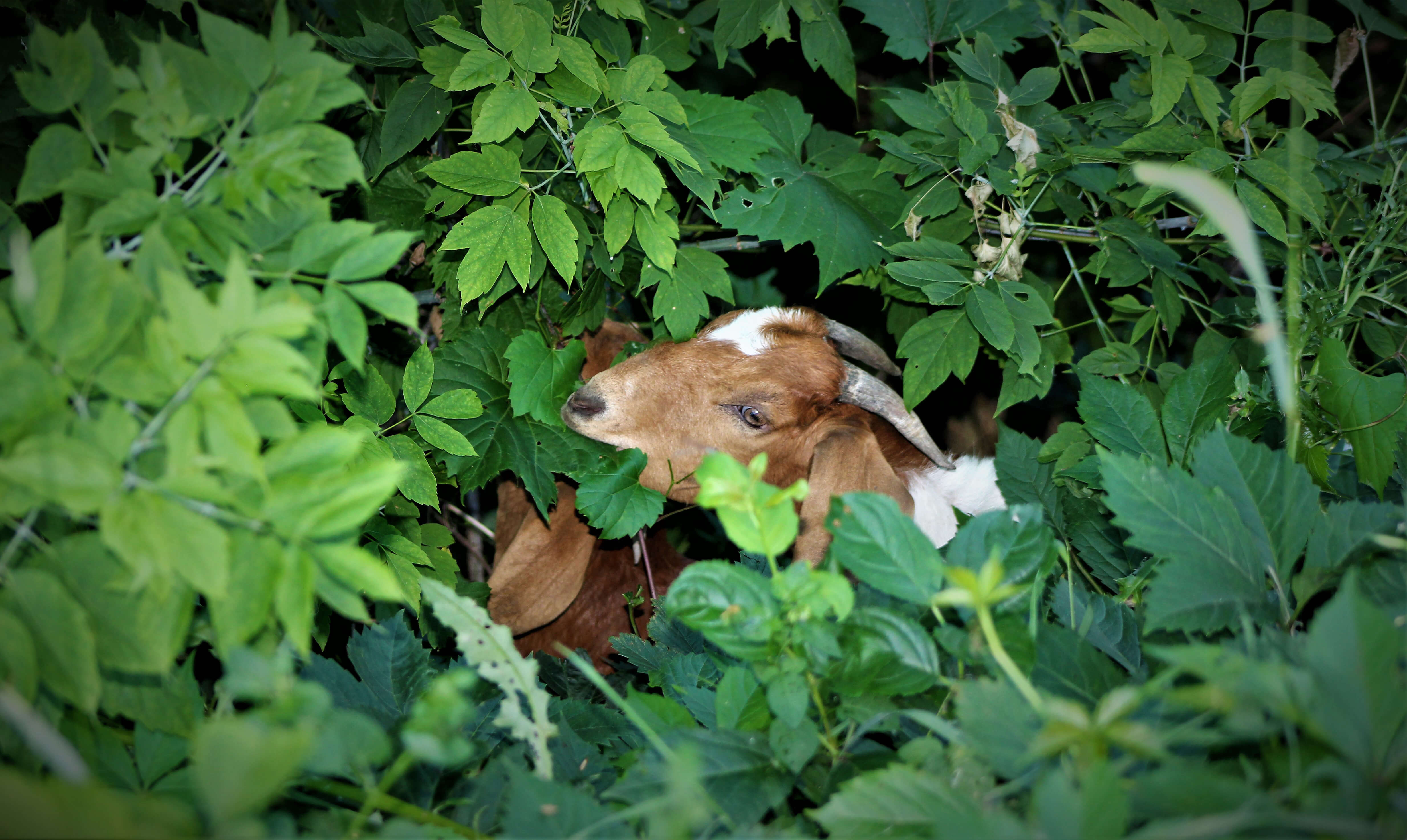 Photo Credit: CNS/Brad Birkholz, The Compass - A goat consumes buckthorn shrubs and other unwanted vegetation at St. Mary Catholic Cemetery in Appleton, Wisconsin. Twelve goats help rid the cemetery of the invasive species of shrub, thanks to a grant from the Community Foundation for the Fox Valley Region.

Goats tend to get a bad rap in church traditions — with the devil often portrayed with goat horns and hoofs, and Jesus speaking of separating goats from sheep, as told in Matthew 25, verses 32 and 33.

But at St. Mary Cemetery in Appleton, goats are getting positive reviews.

In early July, five goats arrived in the cemetery from a farm in nearby Black Creek. They’re helping tackle the cemetery’s problem with buckthorn, an aggressive, invasive species of shrub that had overtaken the cemetery’s riverbank.

“We had been working the last couple of years to clean up the riverbank, to give a little better view of the river,” explained Brian Dresang, cemetery director. “We ran into an issue of buckthorn. Buckthorn will tear you apart if you get into it. We had a couple of trees down, or with branches down, and we wanted to get that cleaned up. And right under those trees is buckthorn. Obviously, that was trouble.”

The cemetery considered using herbicides to kill the shrub.

“Herbicide is quicker, but we thought it was better to do it naturally,” Dresang told The Compass, newspaper of the Diocese of Green Bay. “We were afraid of killing off other things we didn’t want to kill off: lots of deer, turkeys, squirrels, chipmunks. We figured it would harm them too. This is a definitely longer process but, in the long run, it’s a lot better.”

Cemetery officials also worried that the rain would carry the chemicals into the nearby river.

The solution came from landscaper Ron Wolff, who owns Lakeshore Cleaners in Appleton. Wolff was working with a property owner near the cemetery and suggested using goats to clear the pesky plants there.

It turns out goats don’t hate buckthorn like humans do. In fact it’s the opposite. Dresang quoted what Wolff told him: “Buckthorn is like hot apple pie to goats, it’s like their favorite thing.”

The Sierra Club’s website notes that, “thanks to their voracious appetites — goats can eat up to 10 pounds of vegetation per day — and (with an) ability to navigate difficult terrain — the ravenous ruminants are on the front lines of fire prevention.”

St. Mary Cemetery got clearance from the town of Grand Chute, purchased and placed electric fencing to keep the goats from the cemetery’s hedges, roads and gravesites, and turned them loose. Seven goats were added Aug. 2.

“It’s amazing the amount they eat,” said Dresang. “They are about 3 feet high, but do they eat a lot of stuff. … Ron said they would make a big dent. … I didn’t believe him, but I have to admit, they eat a ton.”

The goats have been welcomed by visitors, who come to see the voracious weed-eaters. Many people take photos and children love to watch them. One father brings his four small sons almost daily.

Since the goats find their own food, the cemetery only needs to supply a source of fresh water daily. The goats will remain onsite until fall.

Funding to rent the goats came through an anonymous grant from a family fund within the Community Foundation for the Fox Valley Region. For several years, the same family’s fund has helped the cemetery with upkeep, replanting large trees after a storm several years ago and repairs to their dump truck.

“Not a lot of cemeteries have a family foundation that wants to keep the cemetery beautiful,” Dresang noted. “A small cemetery like us loses money every year. The cemetery business is a hard business anyway. There is no way we would be able to do this without them.

“When we pitched the idea (of goats),” Dresang added, “(the family) loved it because of the more natural way of doing it and because they like creative, out-of-the-box thinking.”

Dresang estimated the nine-acre cemetery has at least two acres of ravines and riverbank. So, if the goats don’t finish their work this year, they’ll return in spring.

Share This Post
Cemeteries, Goats, Wisconsin
See More
Last Article
Christ’s love gives hope to forgotten ones, cardinal says
Next Article
The sins of the past
Back to Vermont Catholic Magazine