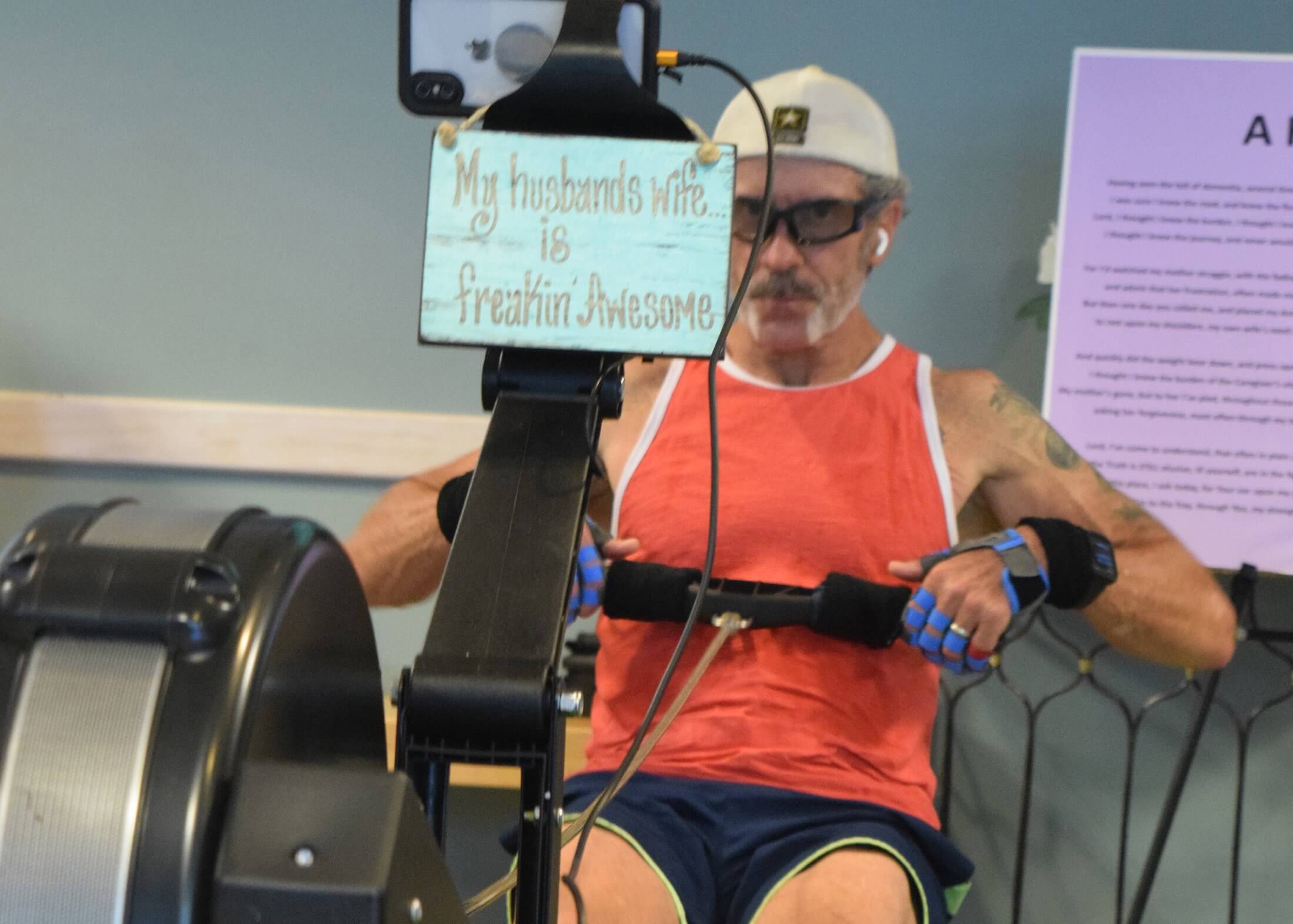 Photo Credit: CNS/Jennifer Neville, The Catholic Virginian - John Musser, a member of St. Joan of Arc Parish in Yorktown, Virginai, rows June 21 at the start of his parish's service week. Musser rowed for 24 hours to raise money for the Alzheimer's Association and to raise awareness for Alzheimer's caregivers.

It wasn’t breaking the world record for rowing distance of which John Musser was the most proud.

Nor was it that he rowed on a rowing machine for 24 hours at his parish, St. Joan of Arc in Yorktown, at the beginning of its recent service week.

” fundraising campaign in which people from throughout the world do fundraisers on or near June 20, the summer solstice.

His June 21 fundraiser placed in the top five for the participant division at the national level.

Musser’s father, mother-in-law and three grandparents suffered dementia, and he is now the caregiver for his wife, Robin, 56, who has young onset Alzheimer’s.

Through this difficult chapter in his life, he said, his faith has grown.

“As much as I thought I had this powerful, mature faith, here’s a place where it needed some serious growth,” he said, adding that he realized that part of faith is allowing others the opportunity to be the hands and feet of Christ by assisting him.

The Compassio Row, Latin for “to suffer together,” drew most of its funds through outright donations, but parishioners and friends from across the country paid $100 to row for one hour by him on one of other three machines in the church commons, and many congregated around him for support. He said one of his objectives was to suffer vicariously with Alzheimer’s caregivers.

“We are all in this together whether life is good or bad,” parishioner Peter Romeo, who rowed for an hour with Musser, told The Catholic Virginian, Richmond’s diocesan newspaper. “If someone is hurting or has a need, we respond.

“I think that is part of our great commission — to make disciples of the world … to join in the suffering of others to show that they aren’t in this alone.”

More than 6 million Americans have Alzheimer’s. Eighty-three percent of the help provided to older adults in the United States is from family members, friends or other unpaid caregivers. Of those, nearly half assist adults with dementia, according to the Alzheimer’s Association website.

“As a husband, you can’t feel worse than watching something slowly kill your wife, and you have to just sit there and try to distract her from it. And you can’t do anything to take it away. And it’s terribly sad to see them lose their independence,” Musser said.

Musser rowed 282,981 meters (175.8 miles), topping the world record by 8,865 meters (5.5 miles) in the lightweight division. He suffered an adverse physical condition due to the intensity of his workout and was in the hospital overnight. Nevertheless, Musser said he is “so glad” he did the row because it allowed him to “take a swing at Alzheimer’s.”

“I’ve got a wife suffering, and I can’t fight this thing. I can’t alter it. I can’t change what she is going through, but I can do something for others,” he said. “I can try to make a difference in the future, and this is my way. It’s my way of staring Alzheimer’s in the face and saying, ‘I’m going to make a difference.'”

His next goal: to be as successful caring for his wife as he was in the row.