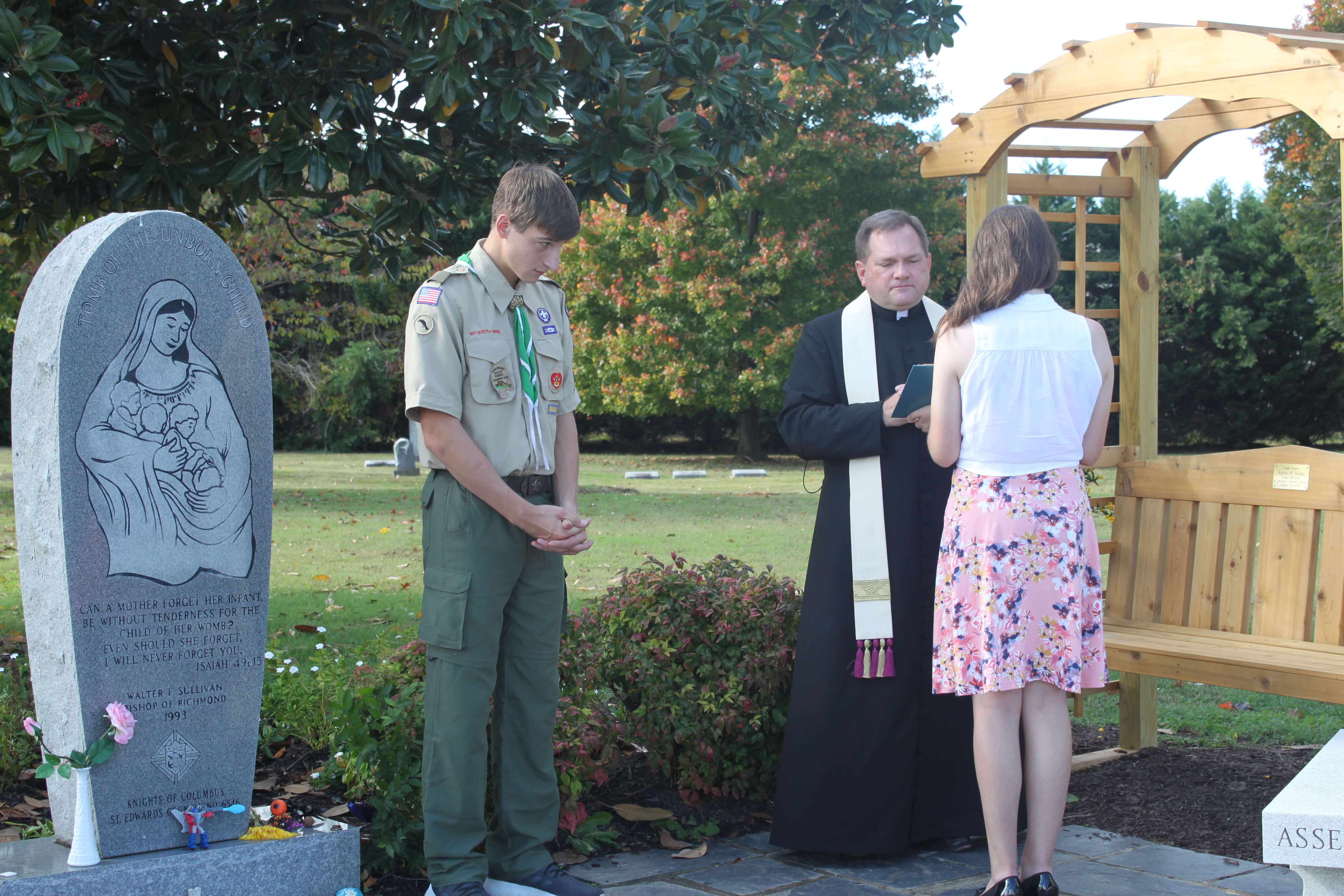 Photo Credit: CNS/courtesy Mary Hodge - As Gianna Hodge holds the Book of Blessings, Father John David Ramsey, pastor of St. Benedict Parish in Richmond, Virginia, blesses and dedicates arbor benches next to the Tomb of the Unborn Child at Richmond's Mount Calvary Cemetery. They were built by Aaron Hodge (left) as his Eagle Scout project.

Their names were Gabriel, Angela, Faith-Marie and Lucy Hodge. They were each loved by their family, but none survived to meet the family outside the womb.

Now their names are etched on a plaque at the Tomb of the Unborn Child, a memorial for miscarried and stillborn children located at Mount Calvary Cemetery in Richmond.

When 17-year-old Aaron Hodge began to design his Eagle Scout project, he originally proposed constructing a wooden arbor bench for the garden at his home parish, St. Benedict in Richmond. But that plan didn’t materialize, and Aaron’s project was left without a home.

That’s when he believes Mary stepped in.

“I feel like it was guided in some way by the Blessed Virgin Mary,” he told The Catholic Virginian, Richmond’s diocesan newspaper. “Through the process, my project was guided to where it really mattered, right at the Memorial at Mount Calvary. Where my benches stand today aren’t where I originally thought I wanted to put them, but rather where Mary wanted me to put them.”

Hodge, like so many others, was not aware of the memorial. The Knights of Columbus suggested he visit it. After he attended an Interment of Angels memorial service at the cemetery in memory of recently deceased children, Hodge knew it was the right place for his benches, and the perfect way to honor his lost siblings.

“They are always watching out for me,” he said, “so I kept that in mind and dedicated the benches to all the unborn, especially them.”

The Knights erected the original memorial monument in 1993. It features Mary holding several children, wrapping them in her arms. It also includes a passage from Isaiah 49:5: “Can a mother forget her infant, be without tenderness for the child of her womb? Even should she forget, I will never forget you.”

Bob Szerszynski, state deputy of the Virginia State Council of the Knights of Columbus, said the Knights championed Hodge’s project because “support of the unborn is at the top of our list of priorities.”

“Just because these children died doesn’t mean we don’t have an obligation to them,” he added.

Jim Glass, general manager at Mount Calvary, estimates about 10,000 unborn children are interred at the cemetery, sharing graves in a large stretch of land to the side of the memorial.

Mourners are invited to visit the memorial to pray, think and grieve. Some leave mementos at the memorial stone, such as flowers, crosses and rocks with messages painted on them.

When Glass started working there 12 years ago, he also didn’t know about the memorial but wishes there were more like it.

“I had a stillborn child when I lived in Charlotte, North Carolina, and there was no program like this available there,” he said. “Being young, without any money, we just relied on the hospital to dispose of the remains — a decision I live with every day.”

Glass said the memorial and the interment services give him “a unique perspective” on how important they are, noting he wished it had been available for his wife and him.

“There is no doubt that this service and the memorial which allows them to visit, brings a lot of closure and comfort to families affected,” he said.

Glass said the cemetery partners with the Knights of Columbus and Bliley’s Funeral Homes, which works with area hospitals to let families know about the program. Bliley’s and Mount Calvary offer their services for free to these grieving families.

When Hodge approached him with the benches proposal, Glass introduced it to Mount Calvary’s board of directors, which quickly approved it.

To attain the Eagle Scout rank, the highest offered by the Boy Scouts of America, a Scout must plan, design, gather materials, fundraise and find helpers themselves to carry out a project. From concept to construction to the blessing, the arbor benches took a year.

Hodge’s parish gave him the opportunity to speak after every Mass one weekend in hopes of gaining financial and spiritual support.

Between his parish and members of the Knights of Columbus, Hodge raised nearly $2,000, about $800 more than he needed. He gave the extra money to Mount Calvary to use as needed.

Home Depot, Goodwyn Lumber and Pleasant’s Hardware donated materials or gave discounts to the cause. Some people volunteered to help with landscaping and placing the benches. Hodge’s grandfather, Tom McKinley, guided him at every step.

Hodge’s parents, Barry and Mary, have four living children and four miscarried children. Mary said that miscarriage is “never something that one ‘gets over,’ you simply get through. That’s why the Interment of Angels is so important. It gives some comfort, peace and closure, and marks the importance of all life.”