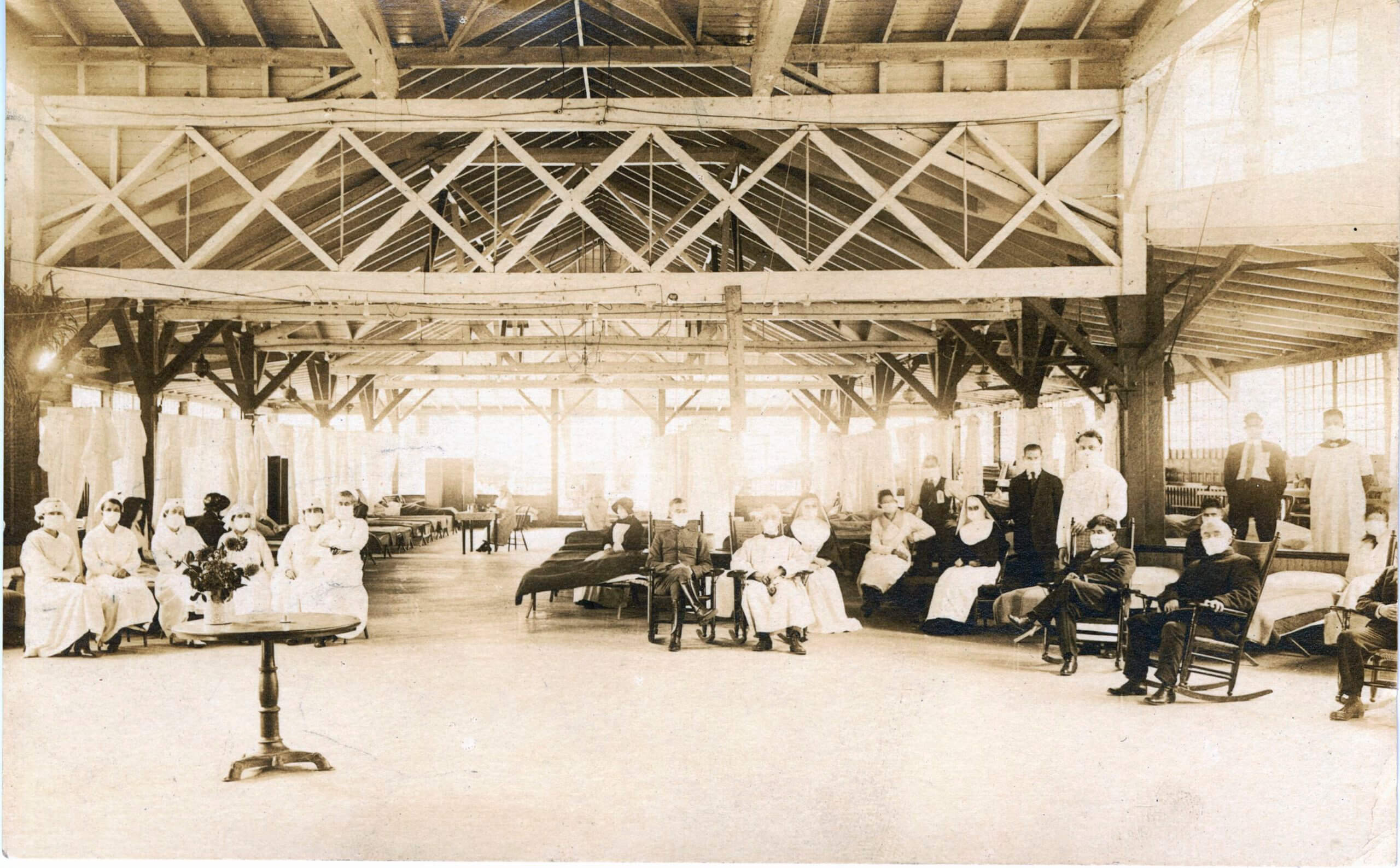 Catholic nuns emerged as the unexpected heroes in the 1918 Spanish flu epidemic that killed hundreds of thousands in the United States and millions worldwide.

“While praise must be given to all workers who assisted in fighting the epidemic, special praise should go out to the Catholic sisters who went out from their convents into private homes and, with the unselfishness that characterizes these women …, gave service which money alone could never have purchased,” wrote Boston Public Health Commissioner William C. Woodward in the Oct. 18, 1918, edition of the Boston Traveler newspaper.

“These devoted women, many of them teachers and not at all used to nursing, never hesitated to perform services which are the duty of the professional trained nurse,” he added. “Whatever was needed to be done it was their pleasure to do.”

Throughout the United States, thousands of women religious took on nursing duties in hospitals or clinics and went into private homes to offer food, medicine, comfort and even housecleaning to families affected by the Spanish flu.

Their example prompted a March 20 opinion piece in The New York Times that said “the sisters’ quiet, determined selflessness is what is needed now, and what we will need more of in the weeks and months to come.”

“One hundred years on, the work of the sisters provides us a model to follow and aspire to in this uncommon time: one that presses us to look for ways to support our neighbors rather than shrinking from them, to acknowledge our fears but to find courage in the strength of our communities, and ultimately to put others before self,” wrote journalist Kiley Bense.

A history of the first 100 years of the Sisters of Mercy of Manchester, New Hampshire, published in 1968, recounted the experiences in October 1918 of Sisters M. Inez Bernier and Lumina Lemire at the home of “a wood chopper, his wife, a boy of 3 and an infant of only a few days” living in “three rooms of a damp basement.”

“Once the temperature of the rooms had been raised by throwing wood on the kitchen stove, Sister M. Lumina applied herself to preparing some hot ‘stir-about’ for the father and son,” wrote Mercy Sister M. Benigna Doherty, author of the history. “Sister M. Inez, meanwhile, performed a task entirely new to her — bathing the infant.”

When the “Sisters of Oak Hill Pest House” asked for assistance in caring for the “poorest of the poor,” five Sisters of Mercy responded, the history recounts. “The religious turned their hands to any task which they saw to be done, but mostly they comforted the languishing patients, whose greatest need, in most cases, was to be prepared for death.”

In Philadelphia, one of the hardest-hit U.S. cities with an estimated 13,000 to 16,000 flu-related deaths, nearly all of the 2,200 non-cloistered women religious took on some role in fighting the epidemic, according to Patrick Shank, assistant archivist at the Catholic Historical Research Center of the Archdiocese of Philadelphia.

Archbishop Dennis Dougherty offered the use of archdiocesan buildings as temporary hospitals and called on all priests, non-cloistered nuns, seminarians and members of the Society of St. Vincent de Paul to assist victims of the Spanish flu.

“It was all hands on deck,” Shank said. Although 11,000 people died in October 1918 alone in Philadelphia, the actions of women religious and others in the archdiocese “kept it from getting even worse,” he added.

Although the mayor of Philadelphia and others praised the city’s nuns for their work during the epidemic, some demonstrated their humility by asking the archdiocesan newspaper, The Catholic Standard and Times, not to publish their individual names in articles about their assistance, Shank said.

“The impact of the sisters’ work was immeasurable as without them many hospitals would have been dangerously understaffed and unable to care for the infected,” according to an article on the research center’s website. “Their largest anonymous actions helped save the lives of many throughout the city and kept the worst pandemic from being even more deadly.”

Even some women religious who did not take a direct role in aiding the sick played a part.

A Dec. 2, 1918, entry in the annals of the Daughters of Charity provincial house in Emmitsburg, Maryland, noted: “The influenza has broken out among our workmen, nearly all are down; the sisters had to milk the cows today and were delighted to do it.”

The Daughters of Charity also took on extra duties at their 110-bed St. Paul’s Hospital in Dallas, where 63 tents were erected on the hospital grounds to accommodate the overflow of Spanish flu patients, primarily from the local military bases of Camp Dick and Love Field.

Sisters from various religious congregations also provided “valuable assistance” at the Public Health Service in Washington during the epidemic, according to a Dec. 31, 1918, letter from Gen. Rupert Blue, surgeon general of the U.S. Army, to Cardinal James Gibbons of Baltimore, whose archdiocese then included Washington.

“Their habit of quick and unquestioning obedience to orders and their willingness to render every assistance in their power made their services of exceptional value, and the self-sacrifice they displayed in nursing persons suffering from this dangerous disease is highly commendable,” Blue wrote.

At Jackson Barracks in New Orleans, 10 sisters from the local Charity Hospital were “on duty day and night” with sick soldiers, supplying them with “tobacco, cakes, ice cream and … tonic,” according to an account in the archives of the Daughters of Charity.

“The sisters washed their clothing; kept them supplied with cigarettes and gave them many delicacies, little treats and extra lunches,” the account said.

“Thus was relieved a chaotic condition that had become desperate,” said Jesuit Father Jonathan J. Donovan, the chaplain at Jackson, in an official commendation to the nuns.

At Camp Zachary Taylor in Louisville, Kentucky, 88 nuns from seven different congregations volunteered to work as nurses for the estimated 7,000 sick soldiers there, even though most were teachers with no nursing experience.

Loretto Sister Mary Jean Connor, who had not yet taken final vows, died of the flu and received a military funeral at Camp Taylor before her body was returned to the motherhouse for burial.

Sisters of Loretto also worked with the mining communities of eastern Kentucky, where they encountered many who had never met a priest or nun and had strong anti-Catholic sentiments.

“But our going among them on our errand of mercy wrought a change,” wrote Loretto Sister Mary Gabriel Berry to her superior. “Many of them said to us, ‘We will never again believe such tales and terrible things about Catholics.'”

Sister Margaret Donegan, a Sister of Charity at Mount St. Vincent Convent in the Bronx, discovered her congregation’s link to the Spanish flu epidemic while researching another topic a few years ago.

Fourteen members of the congregation with no nursing experience traveled from New York to Shamokin, Pennsylvania, a small mining town, to assist at Edgewood Emergency Hospital.

“On their first day …, the sisters began immediate treatment by bathing, comforting and feeding patients,” Sister Margaret wrote in an article for the congregation’s quarterly magazine, Vision. “Afterward, hospital nurses told the sisters, ‘I shall never forget the first day you came. You looked around, rolled up your sleeves and got to work in earnest.”

Sister Margaret, 83, said she thinks “that spirit is still alive” among women religious even though their numbers have declined and the majority are elderly and “all confined and quarantined right now.”

“Because we are prevented from gathering in large groups, we are very conscious of what is going on and praying privately for what is going on,” she said. “It’s the only thing on our minds right now.”

Sister Margaret said she hoped “this crisis is making us very, very much aware that we are one community, interdependent with the whole world” and that “it will unite us and heal the divide that we are experiencing right now.”

— Contributing research to this story was Katherine Nuss.

From the Archives of the Diocese of Burlington:

During the autumn of 1918, a grave epidemic of influenza swept over the country. The devastation and terror caused by this disease is no exaggeration. Burlington’s third bishop, the Most Reverend John J. Rice, quickly placed every diocesan resource at the disposal of the municipal authorities. In a desperate move to curb the spread of the fatal disease, the Board of Health issued an order forbidding the assembly of people, including church gatherings. Bishop Rice responded instantly and wholeheartedly to the appeal of the municipal authorities for aid, granted permission to all the non-cloistered religious sisters (living in this diocese) to serve as nurses. The sisters, along with the medical community-at-large, toiled with little
sleep while caring for all those afflicted and suffering from the flu. Among the many casualties were Father D. J. O’Sullivan, pastor of St. Mary’s in St. Albans (Nov. 8, 1918) and Father Elias Hendy, SSJ (Dec. 21, 1918).