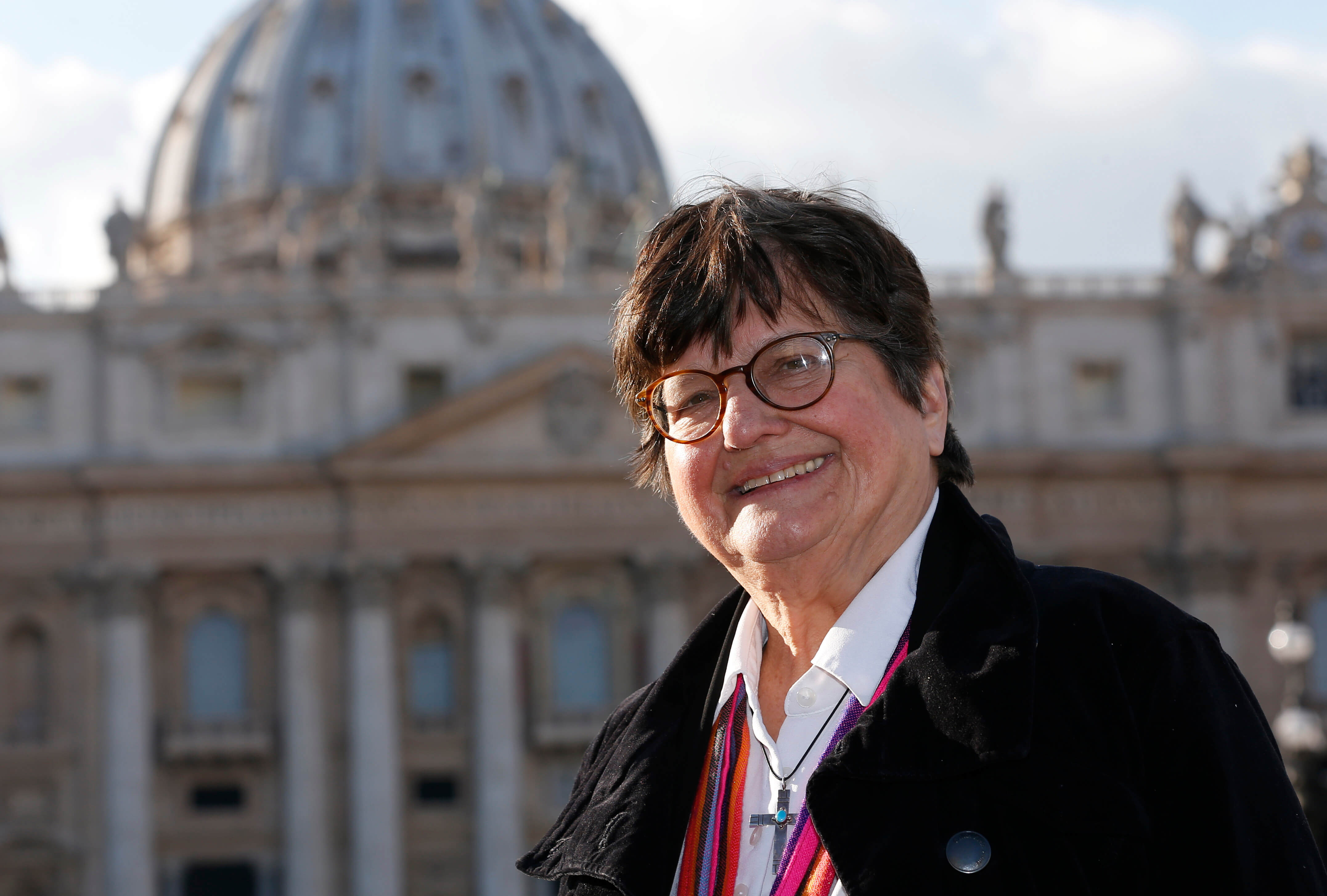 Photo Credit: CNS/Paul Haring - Sister Helen Prejean, a Sister of St. Joseph of Medaille, is seen at the Vatican in this 2016 file photo. She has worked in prison ministry and against the death penalty for decades.

Sister Helen Prejean, the well-known advocate for the abolition of the death penalty, was not always doing this work. It came out of her “waking up,” as she put it, to capital punishment’s injustice.

“When we’re ready, God wakes us up. Then we go help wake each other up. That’s what’s happening with the death penalty in this country,” she told an audience at Georgetown University Sept. 16.

The 80-year-old Sister of St. Joseph of Medaille, who grew up in Baton Rouge, Louisiana, and entered religious life when she was 18, in 1957, pointed out that she had no idea of the extent of racism in this country or its impact on the criminal justice system when she was growing up or during her early years as a woman religious.

She said she was “cushioned and protected” — a description that hardly seems to go with the sister who has been living and working in the St. Thomas Housing Project in New Orleans for almost 40 years and who divides her work between activism, counseling death-row prisoners and working with murder victims’ family members.

Although Sister Prejean was primarily talking about details she reveals in her new book, “River of Fire: My Spiritual Journey” — a prequel to her 1993 book “Dead Man Walking” — her remarks also indicated that she wasn’t just there to tell her own story but to push others along to do more about the social justice issues they feel strongly about.

“It doesn’t matter when you wake up; it’s what you do after you wake up,” she said, adding that “hope happens when we put our hands on some rope and start pulling with a community of people.” She also said it’s paralyzing to just sit around and talk about the things that need to be done instead of actually doing something.

Which is why she didn’t just speak about the death penalty on the Georgetown stage, she also highlighted volunteer work going on at the border, which she said gives her hope, and the work of women in leadership roles in the church today.

In the speaking engagement, one of many she is doing across the country since her new book was released Aug. 13, Sister Prejean, dressed in dark pants and black sweater and wearing a silver cross, poked fun at herself with her Louisiana drawl, describing herself as “one more white lady waking up.”

But she also explained how this awakening occurred by reading from the preface of her book, which describes the first execution she witnessed with these words: “No religious leaders protested the killing that night. But I was there. I saw it with my own eyes. And what I saw set my soul on fire — a fire that burns in me still.”

But backing up to before that execution, she said she started to change her views when she first came to live in the housing project after realizing she never knew anyone personally who was poor. It was there, she said, that she got a request to be a pen pal with a Louisiana death-row inmate, which changed her life.

In her talk, moderated by questions from Paul Elie, author and senior fellow at Georgetown’s Berkley Center for Religion, Peace and World Affairs, she interjected expressions showing her Southern roots and her death penalty advocacy, such as: “Equal justice under law doesn’t mean beans when capital punishment is based on prosecutorial discretion,” referring to attempts to sway a jury to wrongly convict a defendant or impose a harsher than necessary punishment.

The hall where she spoke was filled with about 400 people — students and nonstudents alike. The presentation was sponsored by several Georgetown groups: the university’s Office of the President, Berkley Center for Religion, Peace and World Affairs, the Initiative on Catholic Social Thought and Public Life, and Prisons and Justice Initiative as well as the Pontifical Council for Culture.

Sister Prejean’s closing remarks pretty much summed up why she does her advocacy work and how it ties in to her many decades as a woman religious.

Regarding the death penalty, she said: “Every human being has dignity and worth more than the worst act in their lives,” and “spiritually, who are we to say, ‘God’s finished with you?'”

She also said advocacy work, like what she has been doing for a long time now, can’t be done alone.

“Lone rangers don’t last too long,” she said. “You need to do this in community.”