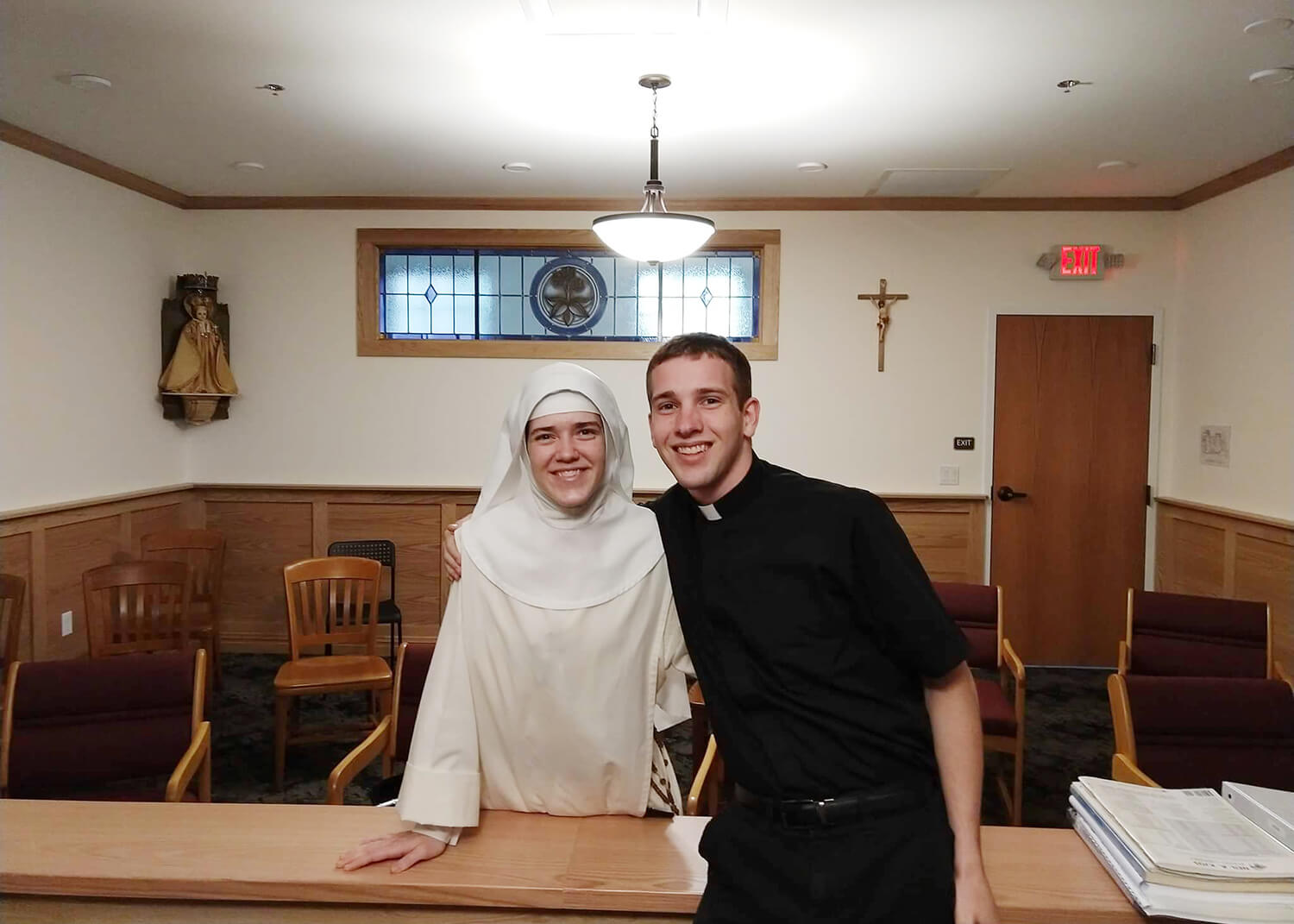 Photo Credit: CNS/courtesy David Langford via Today's Catholic - Seminarian David Langford of the Diocese of Fort Wayne-South Bend, Indiana, visits his biological sister, Dominican Sister Lucia Marie of the Visitation in the visitors' parlor at her first profession ceremony in March. The counter that separates them is a reminder of where the contemplative life of a nun in the convent begins and ends.

Siblings who feel called by God to religious vocations often say the call was distinctly individualized, but they are grateful for the support they received in their discernment from their biological brothers and sisters.

Having a sibling who understands what it means to live and serve within a vocation to others is helpful.

While their parents made choices to raise them in the Catholic faith and support them in their vocation choices, several siblings in the Diocese of Fort Wayne-South Bend, Indiana, say they never felt pressured to pursue a religious vocation, even in the case where a sister or brother did.

Brothers Matthew and Terrence Coonan are two of eight children in their family and were ordained together June 11, 2011.

They were raised in St. Vincent de Paul Parish in Fort Wayne, attending the parish school before going to Bishop Dwenger High School. Their parents were part of a small Christian community where it was important to live the faith in their family, the brothers agreed.

Both benefited directly and indirectly from their involvement in the community.

Father Terrence said the parish youth group also played a “huge” part of his growth in faith, as well as the priests at the parish. He said he was asked to consider a vocation to the priesthood in seventh grade but did not consider it seriously until he was in 11th grade and deciding between college and seminary. Four years later, he decided to go to seminary.

“Father Matt and I both were pursuing the Lord and building up others in the faith during those years,” he told Today’s Catholic, the diocesan newspaper. “He helped in youth group when I was going through it, then in college we had separate ways we were building up the church. This was a neat way that God allowed us to grow toward our vocations together and then separately.”

The Brian and Joan Eichman family, members of Sacred Heart Parish in Fort Wayne, attend the Latin Mass at their parish church. It is celebrated in the extraordinary form, commonly known as the Tridentine rite.

The three oldest daughters in the family of 11 are married and together they have 15 children. The youngest three of Brian and Joan’s children — including a set of twin daughters — still live at home.

Five of the couple’s children are living out a call to religious life. The oldest, Father Gregory Eichman, is a priest of the Priestly Fraternity of St. Peter, or FSSP. He is currently the chaplain at Mater Dei Latin Mass Community in Harrisburg, Pennsylvania. Mother Mary Catherine of Christ is a Carmelite nun in Kensington, California. Nicholas, James and Christopher are seminarians with the same order as Father Gregory.

“Some of the earliest memories I have of my childhood include waking up early for daily Mass and praying the rosary in the evening,” Nicholas said. “These family practices made it very clear that the Catholic faith was the most important thing in life. This made it more natural to enter the seminary in order to see if I had a vocation.

“The major reason I chose to apply with the FSSP is my love of the traditional Roman rite as well as the excellent intellectual formation available here at the seminary,” he added. “Our philosophical studies are heavily grounded in Aristotle while our theological studies are based on St. Thomas Aquinas.”

James said his older brother and sister had an impact on his decision to pursue a vocation.

“On the same weekend in 2012, Father Eichman was ordained a priest and my sister was clothed in the Carmelite habit,” he told Today’s Catholic. “I was blessed to be present at these moving liturgical events, which signified that they were giving their lives completely to God. The solemnity of the ceremonies impressed upon me the importance of the religious vocation and the sacrifice necessary in pursuing it.”

He added that “being able to visit Father Eichman at least once a year at the seminary and become acquainted with seminary life provided me with a solid basis for making my decision to apply for the seminary.”

Mother Mary Catherine was born simply “Catherine.” She is currently the subprioress of her monastery near Oakland, California. She entered the Carmel of Jesus, Mary and Joseph in Valparaiso, Nebraska, just after she turned 18. About a year later, she was sent to California to help start a new foundation since Nebraska was overflowing with vocations.

Christopher said the lives his older siblings are living through their religious vocations was helpful in his vocation journey.

“My older siblings have given me strong examples of the sacrifices and unselfishness that are necessary to conform one’s life to Christ, he said. “They have embraced a life that is a folly to most people, including Catholics. This applies especially to Mother Catherine, whose life as a contemplative nun is incomprehensible to the rest of the world. They have given me the courage to answer God’s call to the best of my ability.”

Seminarian David Langford, studying to be ordained a priest of the Diocese of Fort Wayne-South Bend and his sister, Dominican Sister Lucia Marie of the Visitation, also were home-schooled.

Sunday was devoted to family time, they said, and their father often read classic stories to them such as “The Lord of the Rings” or “Treasure Island.” Another family favorite was a game of apologetics called “Friendly Defenders,” and they prayed a decade of the rosary and read the Bible for a half-hour nightly, as well as attending Mass three times a week.

Both seem to have been called at an early age. Around age 10 or 11, Sister Lucia Marie began telling others of her desire to become a nun someday.

She first visited her religious order, Dominican Nuns of the Summit in Newark, New Jersey, while visiting family nearby. She was advised to get a college degree first. While attending Indiana University-Purdue University Fort Wayne, she stayed in contact with the community, making occasional visits to them and receiving spiritual direction from Father Terrence to sort out her questions, doubts and confirmations about her calling.

David, who is studying for the priesthood at Mount St. Mary’s Seminary in Emmitsburg, Maryland, noted: “God calls who He calls, and it’s easier to answer God’s call when you have a supportive family.”