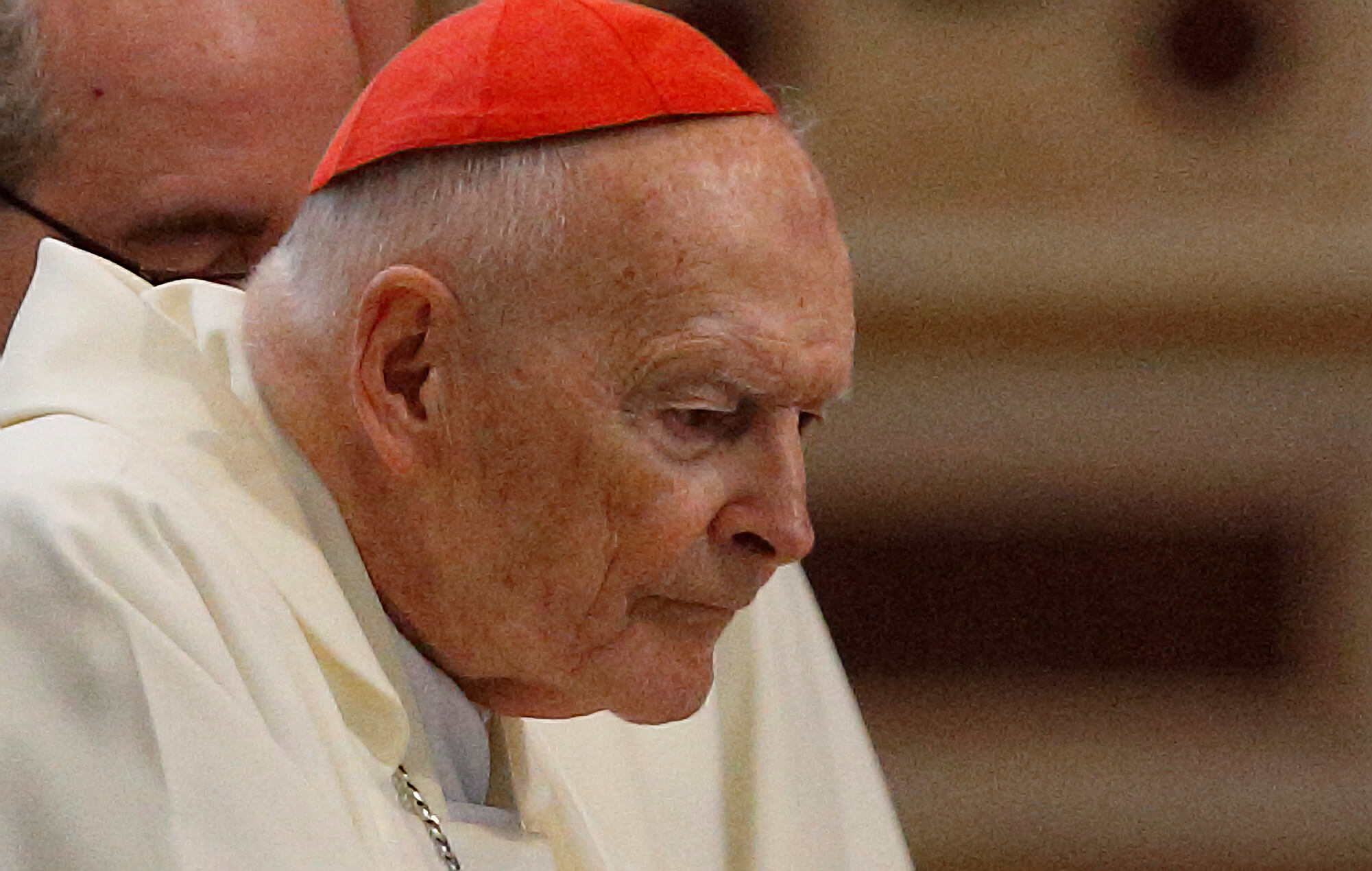 Photo Credit: CNS photo/Paul Haring - Then-Cardinal Theodore E. McCarrick attends a Mass in Rome in April. The retired archbishop of Washington faces a canonical trial on allegations he sexually abused a minor and seminarians years ago. Pope Francis accepted his resignation from the College of Cardinals July 28.

Sexual abuse is always intolerable, regardless of the circumstances

Responding to editors’ requests for a regular sampling of current commentary from around the Catholic press, here is an editorial called “Sexual abuse is always intolerable, regardless of the circumstances” from the Aug. 10 issue of The Criterion, newspaper of the Archdiocese of Indianapolis. It was written by Daniel Conway, a member of the paper’s editorial board.

Just when you think things can’t get any worse, they do. Hollywood moguls, prominent politicians and revered religious leaders have recently been exposed as sexual predators who abused their authority and, in the process, seriously undermined the dignity of countless women, men and children who were unfortunate enough to come under their evil influence.

The case of Archbishop Theodore E. McCarrick, until very recently a member of the College of Cardinals, is particularly heinous. If the allegations against him are true, as a priest, bishop and cardinal, he took something sacred — the trust of children and youth, young adults, priests, bishops and the entire people of God — and trashed it in pursuit of his own gratification.

How could anyone do this? How could anyone who takes seriously the promises made at his ordination or during his installation as a bishop and, later his elevation as a cardinal, look himself in the mirror each morning?

Regardless of the circumstances, sexual abuse is always intolerable. Of course, the more vulnerable the abused person is — children especially — the more serious and damaging the offense. Sexual predators are frequently intelligent, charming and skilled at gaining the trust of unsuspecting victims. Often, these abusers were themselves the victims of sexual, physical or emotional abuse who merely perpetuate the vicious cycle of cruel indignities that are afflicted on others.

The church’s leaders are human and, therefore, subject to the same influences as everyone else. They are sinners called to holiness with the same opportunities and obstacles faced by all the faithful. But as the late Indianapolis Archbishop Daniel M. Buechlein frequently reminded us, deacons, priests and bishops are held to “a higher standard.” They are expected to be virtuous, chaste and unselfish in their daily lives and in their ministry to others — especially those who are most vulnerable.

It is a horrible truth that one out of every five female children and one out of every six male children will be sexually abused — usually by someone they trust — before they reach 18 years of age. Nearly 18 percent of children and youths in the United States experience the tragic reality of sexual abuse. Until the past few decades, most sexual abuse was unreported and most abusers were not held accountable for their crimes.

Since 2002, most Catholic dioceses in the U.S. have worked hard to ensure the protection of children and youths. “Zero tolerance” has been applied to most cases of abuse, and the abusers. Whether priests or lay employees (teachers, coaches, youth ministers, etc.), they have been swiftly removed from their positions of responsibility and reported to civil authorities. This is as it should be, but it doesn’t go far enough.

The Dallas “Charter for the Protection of Children and Young People” was accepted by the American bishops in 2002 in response to the explosion of allegations of sexual abuse by members of the clergy. Since that time, much work has been done in the education and prevention of sexual abuse against minors. What was once taken for granted — the personal dignity and profound respect due to every child, but especially those who are sick, suffering or handicapped — is now solemnly proclaimed and vigilantly safeguarded by the bishops, priests, deacons, religious women and men and lay leaders who carry out the church’s work in our parishes, schools and other ministries. This is as it should be, but it doesn’t go far enough.

The horrific scandal that began decades ago with one revelation after another of prominent Catholic clergy who either sexually abused minors, or engaged in abusive sexual misconduct of young adults, or adults who were somehow vulnerable to their advances continues. Bishops who covered up the sexual abuse of minors engaged in by their priests, or who were themselves guilty of such misconduct, have been called out and punished. And even members of the College of Cardinals from diverse regions of the world have now been held accountable.

When will it end?

This crisis cannot end until every child, youth, young adult and adult is treated with acceptance, love, esteem and emotional and spiritual respect by church leaders at every level and by faithful Catholics. The crisis cannot end until all of us commit to respecting the rights and dignity of all others, and until safe environments are established and safeguarded for all who are in any way vulnerable.

And the crisis can only end when all who occupy positions of trust — in the family, in society and in the church — are held strictly accountable for their treatment of the children, youths and adults entrusted to their care.