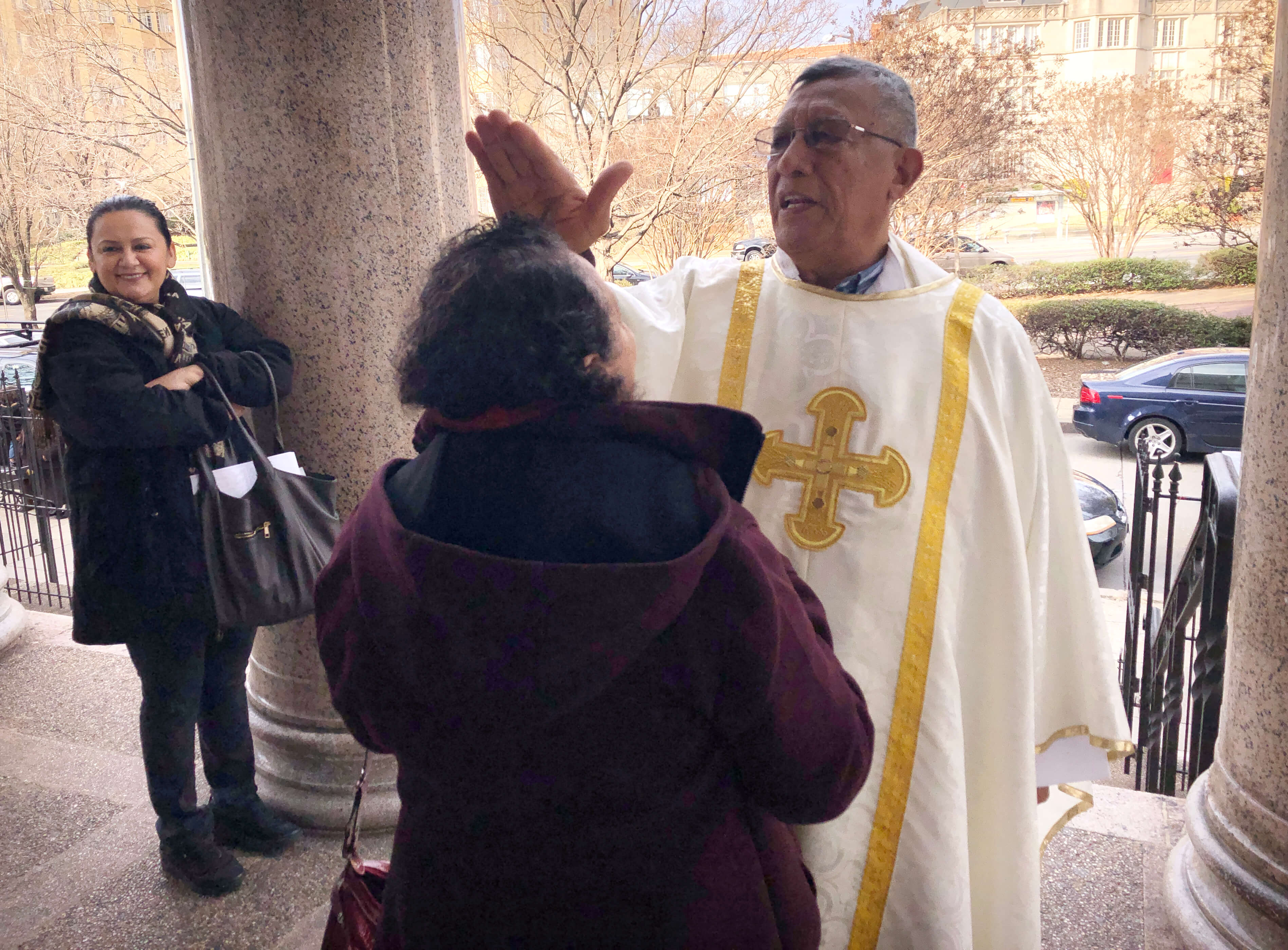 Photo Credit: Salvadoran missions chief: Honor St. Romero by fighting injustice - Father Estefan Turcios, head of the human rights office for the Archdiocese of San Salvador, blesses a parishioner after Mass at the Shrine of the Sacred Heart in Washington, D.C. Salvadorans and admirers of St. Oscar Romero can honor the Salvadoran saint's life by learning about him and then helping those on the margins the way he did, said Father Turcios, director of Pontifical Missions for El Salvador, during a visit to Washington.

After the canonization of St. Oscar Romero finally came to fruition, Salvadorans and the saint’s admirers must give him new life by learning about him, pondering how his teachings apply to the present and helping others around the world based on his work toward ending injustice and exclusion, said the head of Pontifical Missions for El Salvador, the homeland of the new saint.

“We have to give life to his words, his teachings … a rejuvenation,” said Father Estefan Turcios Carpano, who spoke with Catholic News Service during a recent visit to Washington, D.C.

Much is said about his assassination, said Father Turcios, who was a seminarian living in exile in Ecuador when St. Romero, then Archbishop of San Salvador, was martyred while celebrating Mass March 24, 1980. And certainly, he was a symbol of a church under persecution, a Salvadoran who suffered injustices, calumnies, and ultimately a violent death like many of his fellow countrymen and women.

“Now, we have a challenge … to transmit his tenderness, his closeness to the poor, the excluded,” said Father Turcios of the man he knew personally and whom he credits with saving his life after he was wrongfully imprisoned and tortured in El Salvador for six months in 1978. Then-Archbishop Romero secured his release and sent him to live with another bishop in Ecuador so he would be safe.

This is not the time to remain in a celebratory moment, said Father Turcios, who also is the director of the Archdiocese of San Salvador’s office of human rights.

“Yes, he does represent a recent history of pain, of great injustice (in El Salvador), but I’d like to invite others to a metamorphosis of that image. How do we talk about him in the here and now? It’s easy to talk about him in the past, about his history, but we don’t want to live in the past. This is our challenge. What does he mean today? Now, he’s a saint. Now, we have what we longed for, but now what?”

El Salvador, as well as many nations around the world, still experience great injustices, said Father Turcios. Those injustices vary from place to place but believers can pray for St. Romero’s intercession and take action, speaking out the way he did, to end inequality and exclusion around the world.

“The words of St. Romero are not just for Salvadorans. They’re universal and they were prophetic,” said Father Turcios.

Though El Salvador today does not have the political-military conflict of St. Romero’s life and times, it experiences other types of injustices: lack of work with dignity, lack of safety because violent criminal gangs daily torment the citizenry, lack of potable water — both situations disproportionately affect the poor — and a massive displacement of people because of those situations, he said.

“So, today, we have to read his teachings and search for what they tell us about the present,” Father Turcios said. “It’s urgent that we get to know him, that we pray for his intercession. We have to be the world he wanted, one in which no one is excluded.”

But in El Salvador, the past often is difficult to put behind, he admits, partly because the injustices of the past were never resolved, apologized for and ultimately produced no justice or semblance of it.

In the case of St. Romero’s assassination, no one has ever been prosecuted, and recently Father Turcios, through the human rights office, publicly denounced the country’s judicial system for “not carrying out justice” and said the only thing officials had produced in the 38 years since the killing were “creative” excuses.

Aside from witnessing the canonization of his mentor, as well as predecessor (St. Romero was national director of the Pontifical Mission Societies of El Salvador from 1974 to 1978), what Father Turcios said he would like to see is a prosecution of those responsible for St. Romero’s death.

But Father Turcios said he looks for justice where he can find it and the canonization of St. Romero was “an enormous gift,” and a form of divine justice, one he didn’t think he would live to witness.

“It was an incredible joy, a great satisfaction and a beautiful gesture by the church to recognize him as the saint we knew him to be,” he said. “And now he is eternal.”