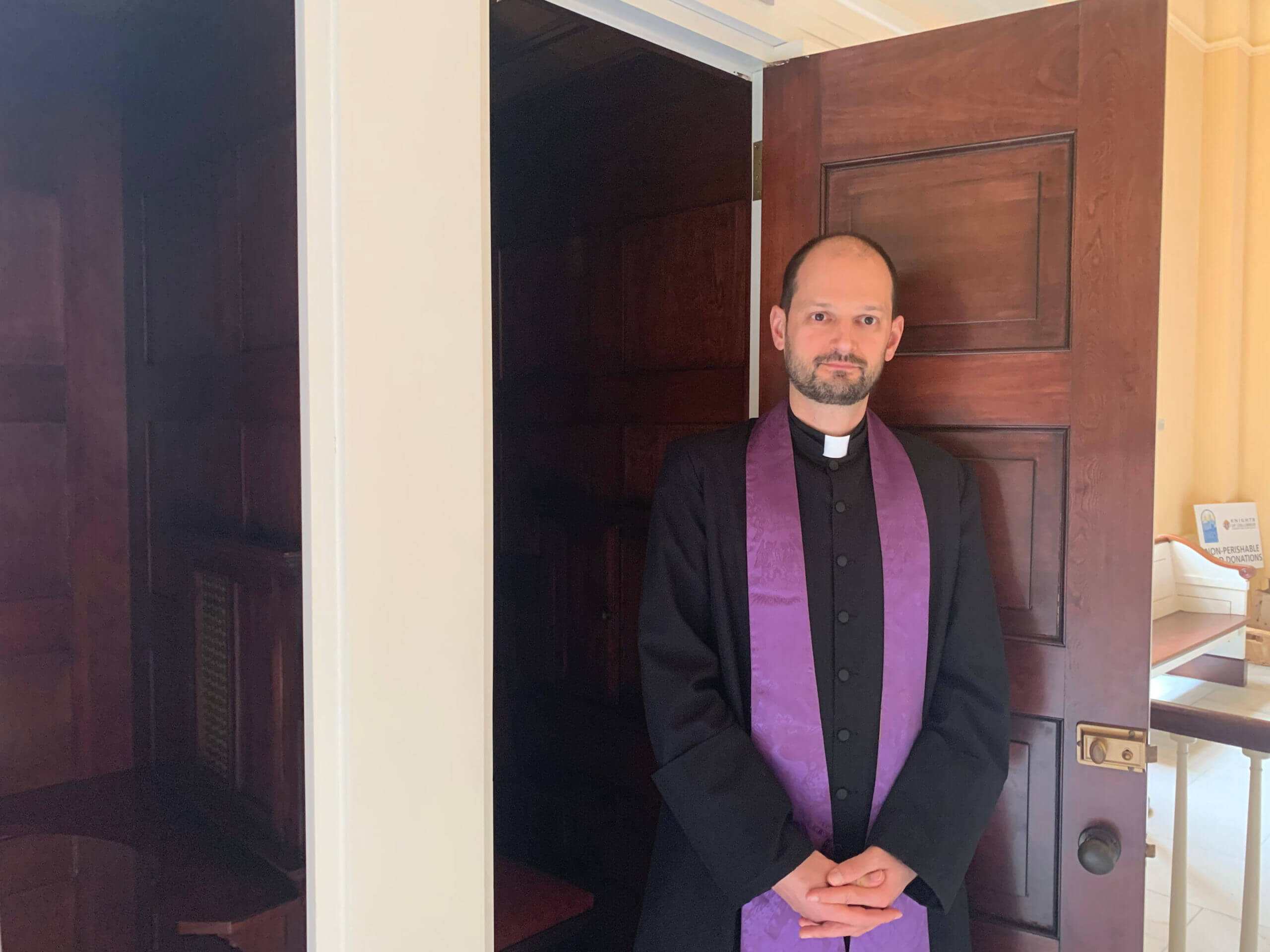 Photo Credit: CNS/Tim Swift, Catholic Review - Father James Boric, rector of the Basilica of the National Shrine of the Assumption of the Blessed Virgin Mary in Baltimore, has greatly expanded confession hours at the basilica. A recent Pew Research Center study found that only 43 percent of American Catholics avail themselves of confession at least once a year, 17 percent go more than once a year and 7 percent go monthly.

Priests working to reverse decline in confession in novel ways

Confession has a confession to make: The sacrament of reconciliation isn’t the draw it once was.

A recent Pew Research Center study found that only 43 percent of American Catholics avail themselves of confession at least once a year. And from there, the numbers get grimmer. A paltry 17 percent go more than once a year, and a scant 7 percent go monthly.

Usually offered in the middle of the weekend on Saturday afternoons, confession can be a hard sell for busy Catholics. The subject matter, sin, also can be a stumbling block in a culture that can be, at times, too enamored with accentuating the positive.

Confessing our shortcomings — on social media, in the therapist’s office and elsewhere — is more popular than ever. But seeking absolution and greater connection with God? Not so much.

That’s why some priests are pushing back against empty confessionals in novel ways. It’s time for confession to make a comeback, they say.

“It wasn’t preached, and it wasn’t made available,” Father Michael DeAscanis said of the decline. “The more we talk about the benefits of confession and the more we make it available, make it easier for people. I think you’ll see this rediscovering of confession.”

The priest is pastor of St. Philip Neri Parish in Linthicum Heights, Maryland, and parish administrator of St. Clement I Parish in Lansdowne, Maryland.

Father Brian Nolan joined St. Isaac Jogues Parish in Carney, in Baltimore County,  as pastor about a year and a half ago and realized the regular Saturday afternoon confession time wasn’t going to cut it.

“Probably the worst time of anybody’s week,” Father Nolan told the Catholic Review, the news outlet of the Baltimore Archdiocese. “Like, who stops midday on a Saturday? What we say in general that is you meet people where they are. Everybody comes on Sunday.”

“Some people could say, well, sin is negative, but it’s real. And to ignore it, it’s like ignoring cancer,” Father Nolan said. “Instead of being weighed down by sins and blocking at times the grace of God in your life, why not have a free, full availability of receptivity to God and his grace?”

Charles Strauss, associate professor of history Mount St. Mary’s University in Emmitsburg, said the decline in confession in the United States began in the 1960s. Before that, from about 1840 to the 1950s, the sacraments, including confession, were woven into the daily lives of many Catholics, especially recent European immigrants.

“Frequent confessions, weekly or monthly, just became part of the cycle. You know, part of the schedule of one’s life,” said Strauss, who also serves as executive secretary-treasurer of the American Catholic Historical Association. “And it was not just regulated by parents, but by authority figures like Catholic schoolteachers, mostly religious and by parish priests.”

The decline in confession can’t be traced to one cause, but many factors, said Strauss, a member of St. Francis Xavier Parish in Gettysburg, Pennsylvania. The suspects are many and varied: a general distrust in authority that became prominent in the 1970s; well-meaning reforms by the church that deemphasized sin also may have discouraged penance; and even the move toward a less formal society.

“If you’re not having a meal in your home together, is it going to be even realistic to think you’re going to follow other rituals of your religious denomination?” Strauss said.

Father James Boric is among the priests in the Baltimore Archdiocese championing the sacrament of reconciliation. He is rector of the Basilica of the National Shrine of the Assumption of the Blessed Virgin Mary in Baltimore.

Father Boric, who decided to become a priest after a particularly powerful confession, has vastly expanded the hours that the basilica offers the sacrament.

He offers confession before midday Masses daily from 11:30 a.m. to noon and also on Sunday. He stays after Masses and offers confessions on major — and well attended — celebrations such as Christmas and Easter. He also offers the sacrament Monday, Tuesday, Thursday and Friday from 5 p.m. to 6 p.m.

But Father Boric said more convenient times are only part of the solution. He regularly preaches about sin and confession, even though some parishioners may not like what could be seen as a negative message.

“We have to preach sin,” Father Boric said. “If there’s no sin in the world, then nothing’s wrong. Then why go to confession?”

“We’ve experienced a tremendous increase in confessions. Now, I’ve made a concerted effort over three years to preach about it often,” he added. “So on like big days, like Divine Mercy Sunday, when there are such great promises attached to the sacrament, I will hear confessions for three, four hours straight.”

In Linthicum Heights, Father DeAscanis is not only encouraging confession in general but also preaching the benefits of regular confession.

“Once a year good. Twice a month better,” is his mantra.

Regular confession can help you better interact with the people you love in your life, Father DeAscanis said.

He recommends that to get the most out of confession, parishioners should do an examination of their conscience beforehand to focus their thoughts. He has a guide for doing that printed in his weekly church bulletin. Quality guides also can be found on line.

“We just need to repent. And I think that in some ways we’re afraid of doing that,” Father Boric said. “And it is hard. I mean, when you’re calling out the sins of the culture, you know, whether it’s promiscuity, whether it’s living together before marriage, whether it’s pornography and all the things that affect people.

And yet there’s a solution … salvation.”