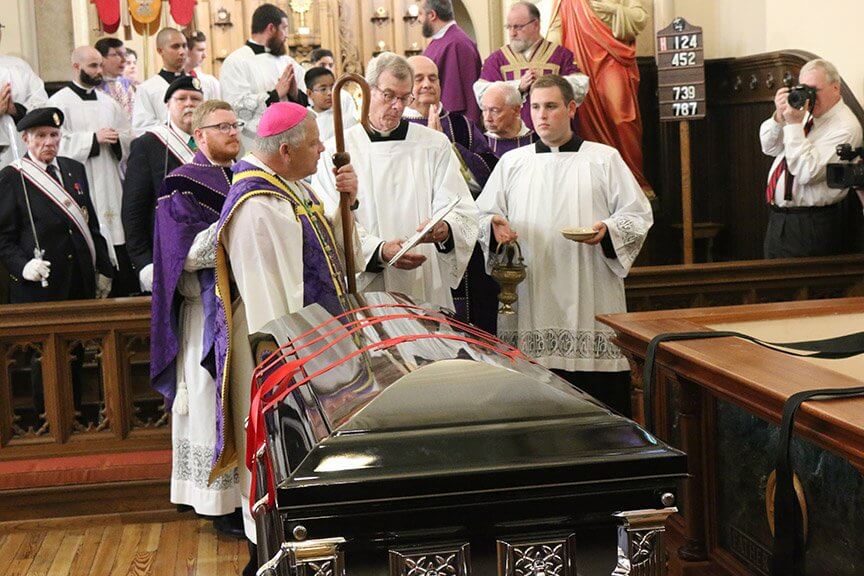 Photo Credit: CNS/Dan McWilliams, The East Tennessee Catholic - Bishop Richard Stika of Knoxville, Tennessee, reads over the casket of Father Patrick Ryan at a memorial Mass last month at the Basilica of Sts. Peter and Paul. The casket is seen next to a specially constructed tomb at the basilica, where the young priest served until he died in 1878 of yellow fever while ministering to victims of the disease.

Possible miracle may be attributed to Tennessee priest’s intercession

As Bishop Richard Stika of Knoxville, Tennessee, presided at a memorial Mass and reentombment of the body of Father Patrick Ryan at the Basilica of Sts. Peter and Paul, a possible miracle attributable to the Chattanooga priest may already be in the works.

Father Ryan was pastor of the downtown Chattanooga parish when he ministered to yellow fever victims, then died of the disease himself in 1878, just a day short of his 34th birthday.

“A life well lived, a short one. There’s no greater gift than to give your life for your friends,” the bishop said during the July 31 Mass.

Father Ryan is a candidate for sainthood. His cause was officially opened in 2016, granting the priest the title “Servant of God.”

Among several women who placed flowers in the priest’s tomb at the end of Mass was Teresa Shramko, who believes prayers to Father Ryan have resulted in her son beginning to recover from life-threatening injuries he sustained when he fell out of a second-story window in April.

Her son has begun to talk and to learn to walk again after coming out of a medically induced coma, and Shramko considers it miraculous.

Two verified miracles attributed to Father Ryan’s intercession would be needed for him to be declared a saint. In general, one is needed for beatification and one for canonization.

The memorial Mass for the priest followed a morning procession from Mount Olivet Cemetery in Chattanooga, where Father Ryan’s remains were exhumed and identified earlier in the week and placed in a new coffin.

The procession echoed one in 1886, when Father Ryan was reburied from a cemetery near the basilica into the then-new Mount Olivet across town. Crowds of all faiths lined the streets of River City, as Chattanooga is known, for miles 135 years ago as the cortege traveled to the cemetery, where the young priest became the first person buried there.

When Father Ryan’s coffin, containing a full skeleton overlaid with new vestments, arrived July 31 at the basilica, Bishop Stika and Father David Carter, basilica rector, led another procession of Knights of Columbus, servers and parishioners behind the pallbearers into the church.

Bishop Stika delivered his homily to a nearly full basilica.

“‘Into your hands, Oh, Father, I commit my spirit,'” he said, quoting Christ’s last words before he died on the cross.

“I wonder if so many decades ago perhaps those were the last words of Father Patrick Ryan, a priest of the Diocese of Nashville at the time, and a son of Ireland,” the bishop said. “It was very similar to what St. John Paul said: ‘Let me return to the house of my father.’=

“I’m sure so many decades ago, Father Ryan would not have understood what we are doing today,” the bishop continued. “A simple son of Ireland, to have all of us present, all of this commotion, in the midst of an epidemic just as dangerous as was the epidemic of yellow fever.”

The memory of the young 19th-century priest “is still celebrated,” Bishop Stika said.

“There are people who are alive today because their ancestors may not have died from yellow fever. Perhaps this priest of God gave them comfort, the Irish smile of kindness, a twinkle. Maybe he blessed them,” he said.

The bishop dropped dirt from Father Ryan’s gravesite at Mount Olivet onto the coffin, which had been placed by pallbearers inside a specially constructed tomb at the basilica.

“Father Patrick Ryan, again we are all reminded that we are dust and to dust we shall return,” Bishop Stika said.

The bishop also placed 51 white roses on the coffin, representing the Diocese’s 50 parishes and one Catholic mission.

“I hope I live long enough to attend the beatification, which would be in Chattanooga. That’s what Pope Francis has told us,” Bishop Stika said, drawing applause.

Father Carter said the memorial Mass was a sign of good news for the Church.