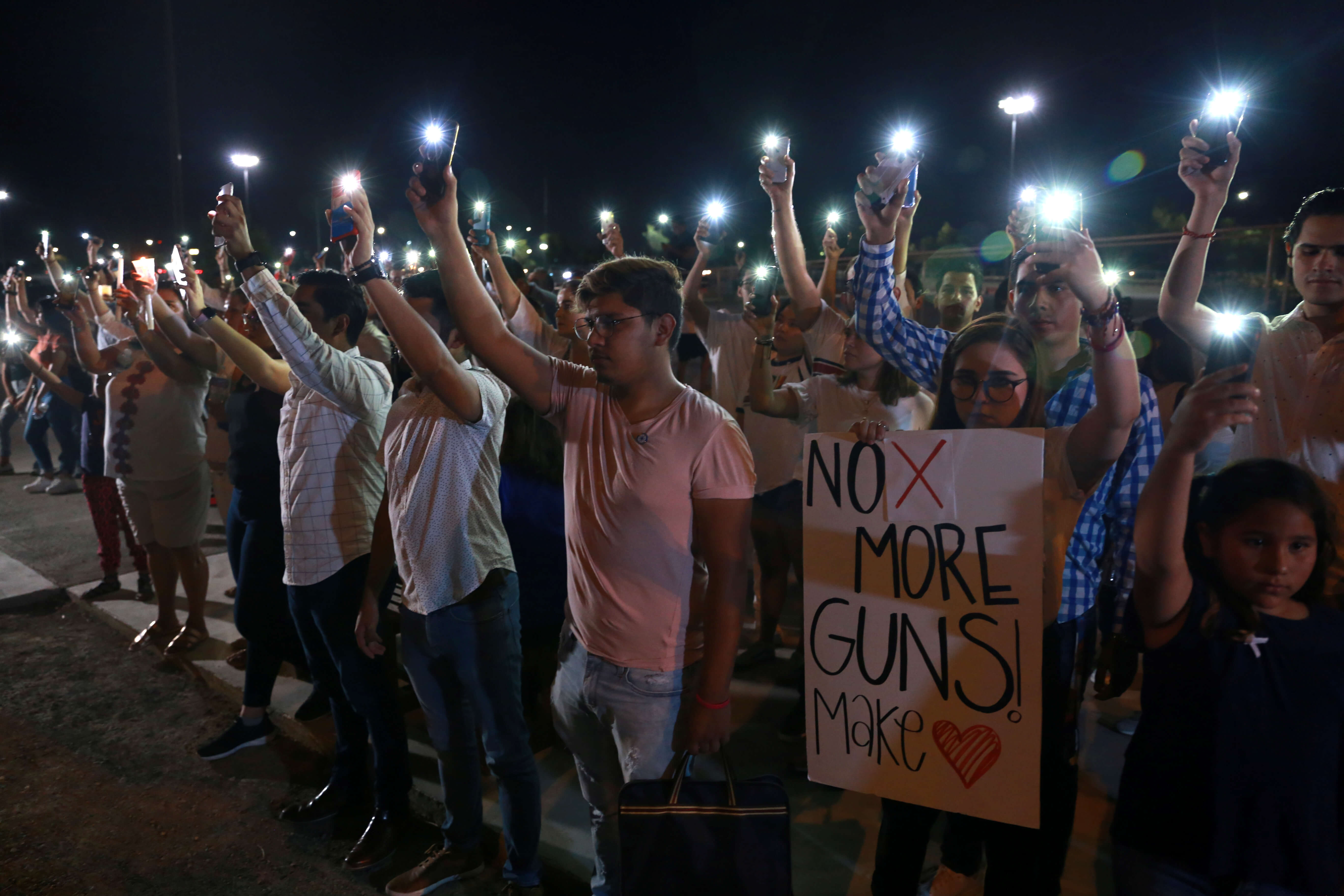 Photo Credit: CNS/Carlos Sanchez, Reuters - Mourners take part in a vigil near the border fence between Mexico and the U.S. after a mass shooting at a Walmart store in El Paso, Texas, Aug. 3. The Catholic Dioceses of El Paso and neighboring Las Cruces, New Mexico, have joined in prayer after the shooting left several dead and many injured.

Pope Francis joined Catholic Church leaders expressing sorrow after back-to-back mass shootings in the United States left at least 29 dead and dozens injured in Texas and Ohio on Aug. 3 and 4.

After the prayer called the Angelus in St Peter’s Square on Aug. 4, the pope said he wanted to convey his spiritual closeness to the victims, the wounded and the families affected by the attacks. He also included those who died a weekend earlier during a shooting at a festival in Gilroy, California.

“I am spiritually close to the victims of the episodes of violence that these days have bloodied Texas, California and Ohio, in the United States, affecting defenseless people,” he said.

He joined bishops in Texas as well as national Catholic organizations and leaders reacting to a bloody first weekend of August, which produced the eighth deadliest gun violence attack in the country after a gunman opened fire in morning of Aug. 3 at a mall in El Paso, Texas, killing 20 and injuring more than a dozen people.

Less than 24 hours after the El Paso shooting, authorities in Dayton, Ohio, reported at least nine dead and more than a dozen injured after a gunman opened fire on a crowd at or near a bar in the early hours of Aug. 4. The suspected gunman was fatally wounded, but police have not yet identified him.

In a statement issued early Aug. 4, the president of the University of Dayton expressed “profound grief and sadness about the horrific shooting in the city’s Oregon District,” where the shooting occurred. “As a Catholic, Marianist community, we offer our prayers for the families and loved ones of the victims and the wounded, both for our friends and neighbors here in Dayton and in El Paso, Texas,” said Eric F. Spina.

In the shooting in El Paso, police arrested 21-year-old Patrick Crusius, of Allen, Texas. Several news organizations said local and federal authorities are investigating whether the shooting was a possible hate crime since the suspected gunman may be linked to a manifesto that speaks of the “Hispanic invasion” of Texas.

On its website, the Diocese of El Paso announced Aug. 4 that Masses would take place as scheduled on Sunday but canceled “out of an abundance of caution” a festival-like celebration called a “kermess,” which is popular among Catholic Latino populations, that was scheduled to take place at Our Lady of the Light Church.

The diocese also asked for prayers and said Bishop Mark J. Seitz would be participating in an Aug. 4 interfaith evening vigil for the victims.

The nonprofit Hope Border Institute of the El Paso Diocese asked anyone who could do so to donate blood at a center in the city. It also gave local directions and offered help via Twitter for those looking for loved ones who may have been hurt in the shooting but who were afraid to contact authorities because of their immigration status.

“If you are afraid to contact the authorities regarding the shooting because of your immigration status, please contact Hope Border Institute and we will help you,” the organization tweeted in English and Spanish.

On Aug. 3, the president of the U.S. Conference of Catholic Bishops and the chairman of the organization’s domestic policy committee asked for prayers for all the victims, and for healing “in all these stricken communities,” but they said the Texas shooting a week after a California shooting shows “something remains fundamentally evil in our society.”

Action is “needed to end these abhorrent acts,” said Cardinal Daniel N. DiNardo of Galveston-Houston, the organization’s president, in a statement issued in conjunction with Bishop Frank J. Dewane of Venice, Florida, Chairman of the USCCB’s Committee on Domestic Justice and Human Development.

“Something remains fundamentally evil in our society when locations where people congregate to engage in the everyday activities of life can, without warning, become scenes of violence and contempt for human life,” they said, calling gun violence a “plague” that “continues unchecked and spreads across our country.”

The Sisters of Mercy of the Americas posted a prayer on their website called “Let the shooting end.” They called on lawmakers to enact guns laws “to protect all in our society.”

Immediately after the news of the El Paso shooting, they tweeted: “Our hearts break for the families of those killed and wounded in today’s mass shooting in El Paso. A school, a movie theater, a church, a shopping mall: All places where we should feel safe, all places that have experienced senseless tragedy because of guns.”

“We specifically pray that Mary the Mother of Sorrows bring solace and consolation to all who grieve and that the Prince of Peace restore a sense of safety and bring love to our city,” he added. “We urge our elected leaders at the state and federal level to take steps to address the plague of gun violence that continues to claim innocent victims across the country and now has come to our beloved city.”

—Carol Zimmermann contributed to this story.

"East is east and west is west," observed Rudyard Kipling, "and never the twain shall meet." Anyone [...]

Read More
Next Article
Knights give more than $185 million to charity, 76 million service hours in 2018
Back to Vermont Catholic Magazine