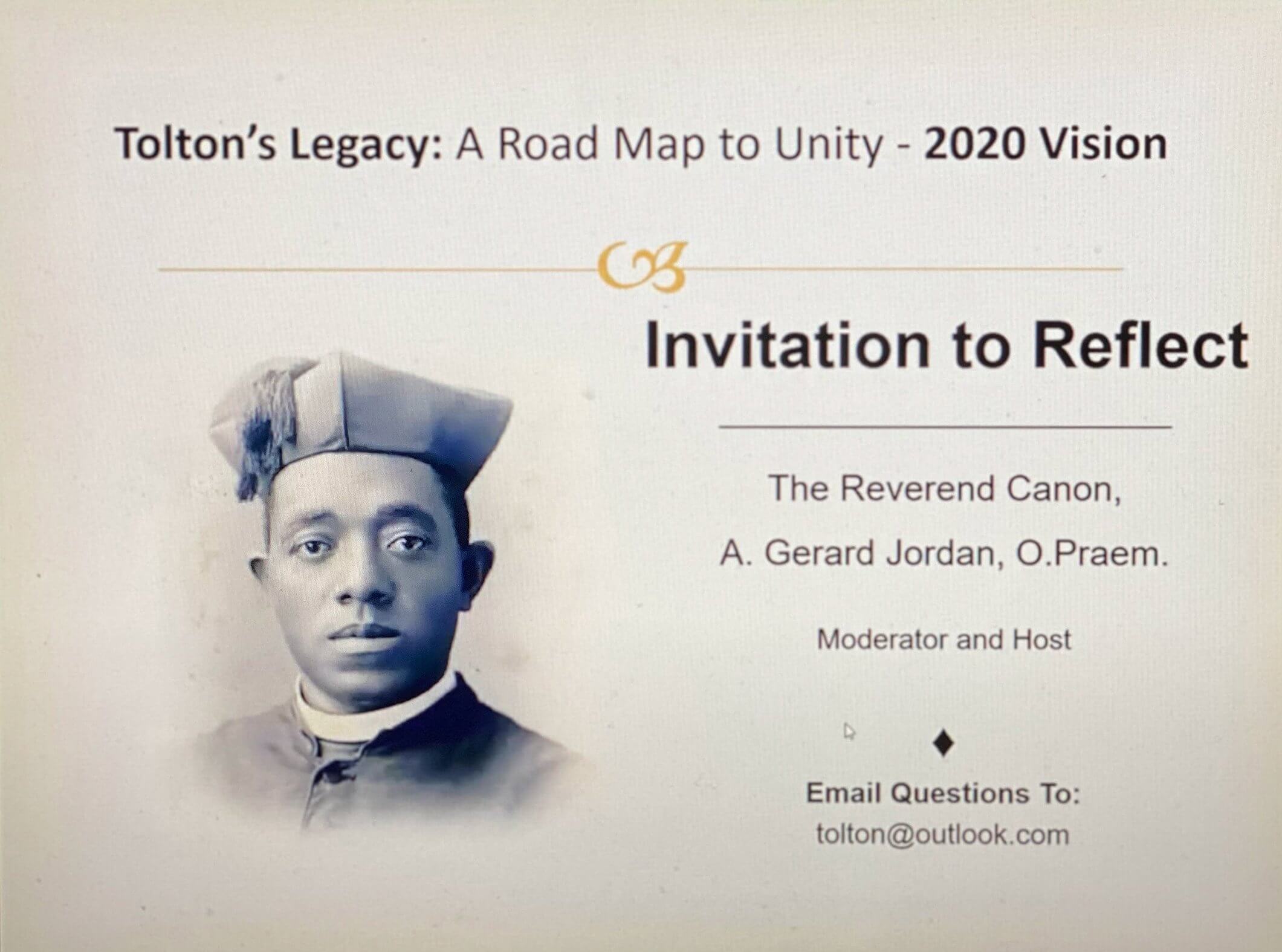 Photo Credit: CNS/screen capture, Andrew Biraj, Catholic Standard - The online panel presentation titled, "Tolton’s Legacy: A Road Map to Unity," took place Aug. 29 and was organized by the Tolton Ambassador Corps, a group of Catholics from across the country commissioned to spread awareness about the significance of Father Tolton's cause for sainthood.

Father Augustus Tolton, who in 1886 became the first identified Black priest ordained for the United States, challenged the status quo to bring about social change.

Father Tolton lived a life of joy, rooted in his desire to help others and humbly work to achieve equality and justice for all, said participants of a panel discussion about the priest’s legacy.

The online presentation Aug. 29, titled “Tolton’s Legacy: A Roadmap to Unity,” was organized by the Tolton Ambassador Corps, a nationwide group of Catholics commissioned to spread awareness about the significance of Father Tolton’s cause for sainthood.

The Archdiocese of Chicago opened Father Tolton’s sainthood cause in 2010. Pope Francis declared him “venerable” in June 2019 after a theological commission unanimously recognized his “virtuous and heroic life.” Two steps of the process remain: beatification and canonization.

Father Tolton served as a parish priest in Chicago, where he died in 1897 at age 43.

In keynote remarks, Archbishop Wilton Gregory of Washington, D.C., encouraged the faithful to work for justice and righteousness, particularly during the current time of racial tension and intolerance.

“Despite the presence of hatred and pain in our society, we can boldly and wholeheartedly live our faith with courage,” Archbishop Gregory said. “Racism is a plague that continues to desecrate even the church that Christ himself has established.”

The archbishop encouraged online viewers to live their faith and work for justice and reconciliation. He said that prayer, diligence, and hope were the basis of Father Tolton’s ministry in the face of intense, systemic societal and ecclesial racism.

“His testimony is a needed example to a world that profoundly needs not to lose hope as we make every effort to bring about justice in our time as Catholics today,” he added.

Panelists addressed lessons from the life of the African American priest who struggled with slavery, racism and injustice, but persevered because of his faith. They said his life is an example of faithful commitment to justice that can inspire today’s Catholics.

“The Church really, truly formed him because they really saved him. They took him from the ravages of his background and made something out of him, and gave him a chance in life that otherwise he would not have received from others,” said Auxiliary Bishop Joseph N. Perry of Chicago, archdiocesan postulator of the sainthood cause.

Father Tolton was born in Missouri in 1854. While he was still a child, his mother escaped slavery with her children, opening the door to a Catholic education that later flourished into a vocation. As his repeated efforts to enter seminaries in the U.S. were rebuffed, Father Tolton pursued his priestly formation in Rome and was ordained a priest there in 1886.

After his ordination, he was sent back to the U.S. to serve in Illinois, becoming the first African American priest to do missionary work in his own country. Throughout his ministry, Father Tolton encountered widespread racism, but he remained focused on shattering barriers of prejudice and hatred.

Panelists also addressed ways to boost the number of Blacks in religious vocations and ways to support them as they experience rejection and discrimination.

Kathleen Dorsey Bellow, director of the Institute of Black Catholic Studies at Xavier University in New Orleans, called for greater access to faith formation and active involvement of parishioners in the life of the church.

Bishop Perry invited families and parish communities to nurture vocations like the religious people who encouraged Father Tolton to consider his vocation.

“I encourage members of parish councils to have an eye to see who’s out there,” he said.

The panelists pointed out that in working for reconciliation, creating dialogues that foster a culture of encounter is essential.

Throughout history, the archbishop continued, many other people from racial and ethnic groups also experienced racism and prejudice and discussing such experiences can be helpful as communities seek healing.

“We should be able to speak honestly about how that has shaped us and what we can do to be more compassionately understanding toward one another,” Archbishop Gregory said.

Other panelists included Cecilia Moore, associate professor of religious studies at the University of Dayton, and Father David Jones, pastor of St. Benedict the African Parish in Chicago.

In closing, the speakers encouraged Black Catholics and others to follow the example set by Father Tolton and other saints who have shown love and grace amid adversity.

“Regardless of what is dished out to us,” Bishop Perry said, “we have to return respect and love and that in itself will save the world.”