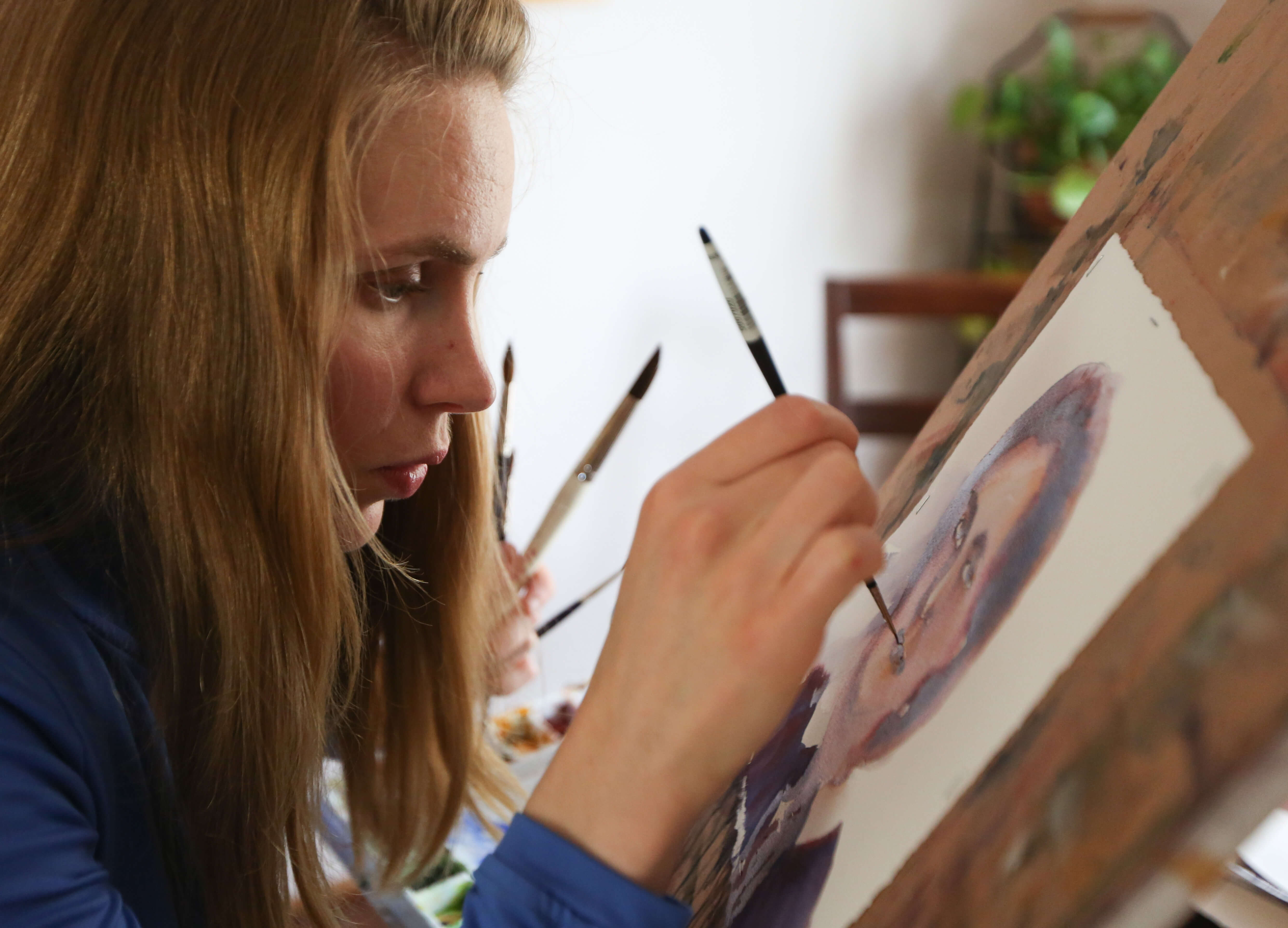 Despite a longtime love for painting and a bachelor’s degree in studio art, Bernadette Gockowski set down her brushes after college. For nine years, she didn’t make art. When she picked them back up last year, it was begrudgingly.

But the 32-year-old had an experience of grace that reignited her passion and ultimately led to her current project: “In the Company,” a watercolor portrait series of modern saints. She has been unveiling one a day via her website, bernadettegockowski.com, and social media throughout the Easter season.

“(With) modern saints … we have photos — which is fun to see what they actually look like — but no one is doing paintings because we have the photos,” said Gockowski. “I’m inspired to take that photo and turn it around. … I started to do it, and I actually found it very spiritual, and it was a real blessing. It made me reflect on my own life.”

Gockowski grew up on a hobby farm in central Minnesota. Her mother was an artist, and as she watched older siblings excel in various areas, she chose art as her pursuit.

But at St. Olaf College in Northfield, where she majored in studio art and art education, Gockowski also experienced an art scene often dismissive and sometimes hostile to her religious beliefs, and at the end of her senior year in 2009 — when her final project depicted the Stations of the Cross — she felt dejected.

After discerning religious life, working in youth ministry at two Twin Cities parishes, then marriage and motherhood, she considered selling her art supplies altogether. She thought art too selfish and impractical for a devout Catholic mom.

But last year her husband, David, a fourth-grade teacher at St. Agnes School in St. Paul, signed her up to teach a summer art workshop for middle-schoolers. She was initially annoyed with the commitment, but on a trip to her parents’ home, she opened her mother’s art books for inspiration. One phrase struck her heart: “The only thing keeping you from being a great artist is you.”

“It was as if God were saying that to me, and in one reading of that line, my whole understanding changed,” she told The Catholic Spirit, newspaper of the Archdiocese of St. Paul and Minneapolis. “My desire to do art came flooding back so badly that I couldn’t even sleep. I was so convinced that’s what I needed to do.”

Caring for her two preschool-age children, Gockowski typically paints about eight hours a week and has a knack for working fast. Her focus is watercolor portraits, and her passion is creating color images based on black-and-white photographs. She’s developed that into an ongoing project she calls “The Colorful Past,” where she paints portraits from people’s black-and-white photos.

As Lent approached, she considered how she might use art as a spiritual discipline. After encountering sacrilegious imagery of saints online, she was inspired to apply the concept of the “The Colorful Past” to the communion of saints — 50 portraits of saints based on black-and-white photographs.

That means the project includes no saints before her namesake, St. Bernadette Soubirous, the Marian visionary of Lourdes, France, who lived from 1844 to 1879 and was the first saint known to be photographed. Her project name “In the Company” is based on a line taken from the “Te Deum” prayer, which says, “The glorious company of apostles praise you.” It’s also the idea of being in the company of the saints.

“I wonder when I die, what will it be like to be in the company of saints,” she said. “It makes me long to see them. … I think they’re very cool people.”

While she’s pleased with the positive reception of “In the Company” on social media and from those who have bought prints, she said it has been a true sacrifice to paint the portraits. “It can get a little dull,” she admitted with a laugh, “because they’re sort of all the same — a lot of beards and black clothes and veils.”

Not all of her subjects are beatified or canonized; some she chose because she hopes they one day might be, such as French stage actress-turned-Third Order Franciscan Eve Lavailliere. Members of the order are also known as Secular Franciscans.

Gockowski also hopes “In the Company” inspires her social media followers — Catholics and non-Catholics alike — to delve more deeply into the saints and to think about them as dynamic people who lived real lives. She’s fascinated by the stories behind some of the photos, such as the one she painted of a 15-year-old St. Therese of Lisieux, who pinned up her hair to look mature enough to enter the convent, and the one of Blessed Miguel Pro, whose photo was snapped by a prison guard at 1 a.m. the night of his 1927 execution in Mexico.

Gockowski has felt a stronger connection to the saints as she’s painted them, and with her brush strokes she also asks for their intercession. Bringing life through color to their black-and-white faces “makes me want to see them more and more” in heaven, she said. It also deepens her desire to be a saint herself.

“It’s changed my spiritual life,” she said of her return to painting. “It’s changed my outlook on my life, because I think it’s a truer version of who I am, and I kind of forgot it. I thought God was saying, ‘It’s done.’ I had let it go so thoroughly that I think God had to say, ‘No, you didn’t. It’s not done. Begin again.'”