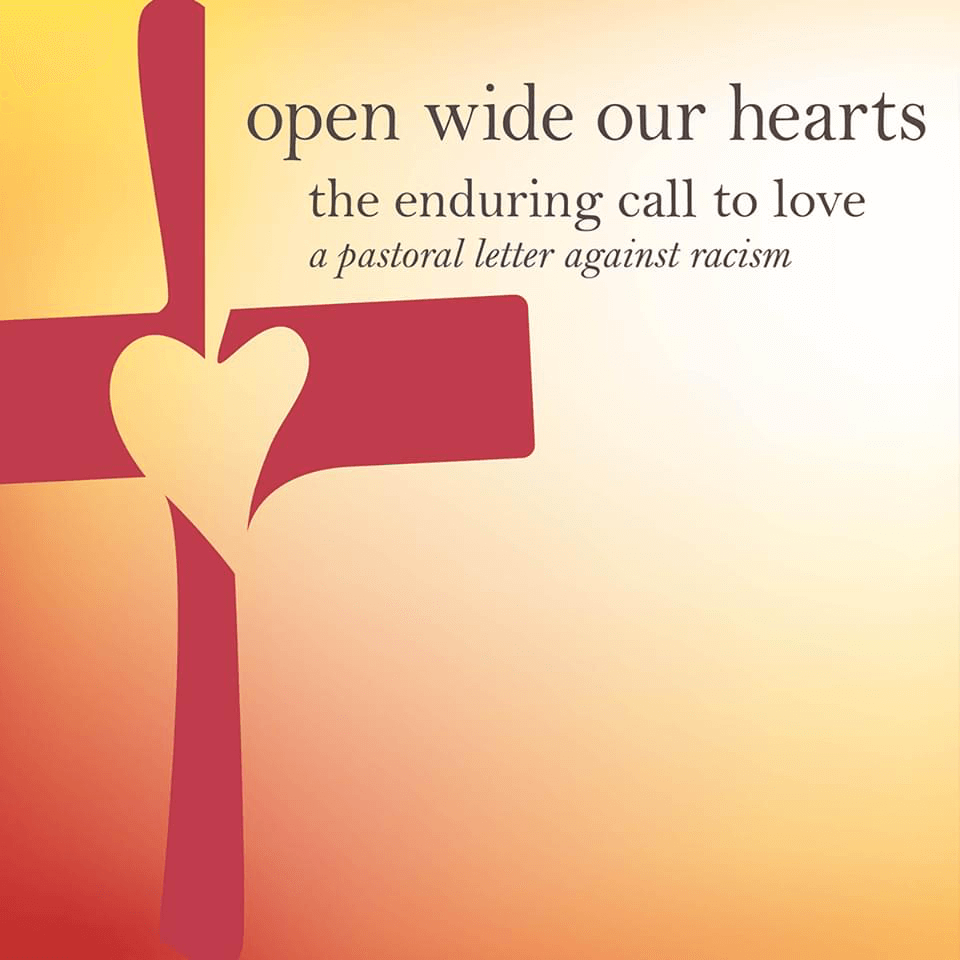 Open Wide Our Hearts, the Enduring Call to Love.

In 2018, the United States Conference of Catholic Bishops (USCCB) published the pastoral letter against racism, “Open Wide Our Hearts, the Enduring Call to Love.” Sadly, not much has changed and “racism still infects our nation.”

George Floyd, who recently was killed by law enforcement as he cried out for mercy, is just one of many black lives lost over the years due the unjust actions of a few officers who do not represent the majority but whose actions erode the entire justice system. In turn, this has sparked protests throughout our nation to address the systemic racism that has been allowed to fester and has infected our institutions that were meant to protect people and administer justice.

As Catholics, how do we rid our communities of systemic racism? This pastoral letter is a good place to begin the process of understanding what racism is and how our faith calls us to respond.

“Racism occurs because a person ignores the fundamental truth that, because all humans share a common origin, they are all brothers and sisters, all equally made in the image of God,” the bishops wrote. “When this truth is ignored, the consequence is prejudice and fear of the other, and — all too often — hatred. Cain forgets this truth in his hatred of his brother. Recall the words in the First Letter of John: ‘Everyone who hates his brother is a murderer, and you know that no murderer has eternal life remaining in him’ (1 Jn 3:15). Racism shares in the same evil that moved Cain to kill his brother.”

As Christians, the bishops’ letter challenges us to recognize and weed out racism first from our own hearts: “It has no place in the Christian heart. This evil causes great harm to its victims, and it corrupts the souls of those who harbor racist or prejudicial thoughts. The persistence of the evil of racism is why we are writing this letter now. People are still being harmed, so action is still needed.”

Nearly two years after the bishops’ letter, people of color are still being harmed, still being killed, and we cannot ignore this disregard of human life. While many of us would like to believe we are not racist, it “can often be found in our hearts — in many cases placed there unwillingly or unknowingly by our upbringing and culture. As such, it can lead to thoughts and actions that we do not even see as racist, but nonetheless flow from the same prejudicial root.”

If we do not start by rooting out racism first from our own hearts, then “consciously or subconsciously, this attitude of superiority” will spread. We can already see how pervasive it is in our society when “certain groups of people are vilified, called criminals, or are perceived as being unable to contribute to society, even unworthy of its benefits. …The cumulative effects of personal sins of racism have led to social structures of injustice and violence that make us all accomplices in racism.”

As Christians, we must also listen and know the stories of our hurting brothers and sisters. “We must create opportunities to hear, with open hearts, the tragic stories that are deeply imprinted on the lives of our brothers and sisters, if we are to be moved with empathy to promote justice.”

This pastoral letter from our bishops is calling for a genuine conversion of heart, a conversion that will compel change, and the reform of our institutions and society. “Conversion is a long road to travel for the individual. Moving our nation to a full realization of the promise of liberty, equality, and justice for all is even more challenging. However, in Christ we can find the strength and the grace necessary to make that journey.”

Let us join, with renewed vigor, in peacefully advocating for and promoting policies at all levels that will combat racism and its effects in our civic and social institutions.