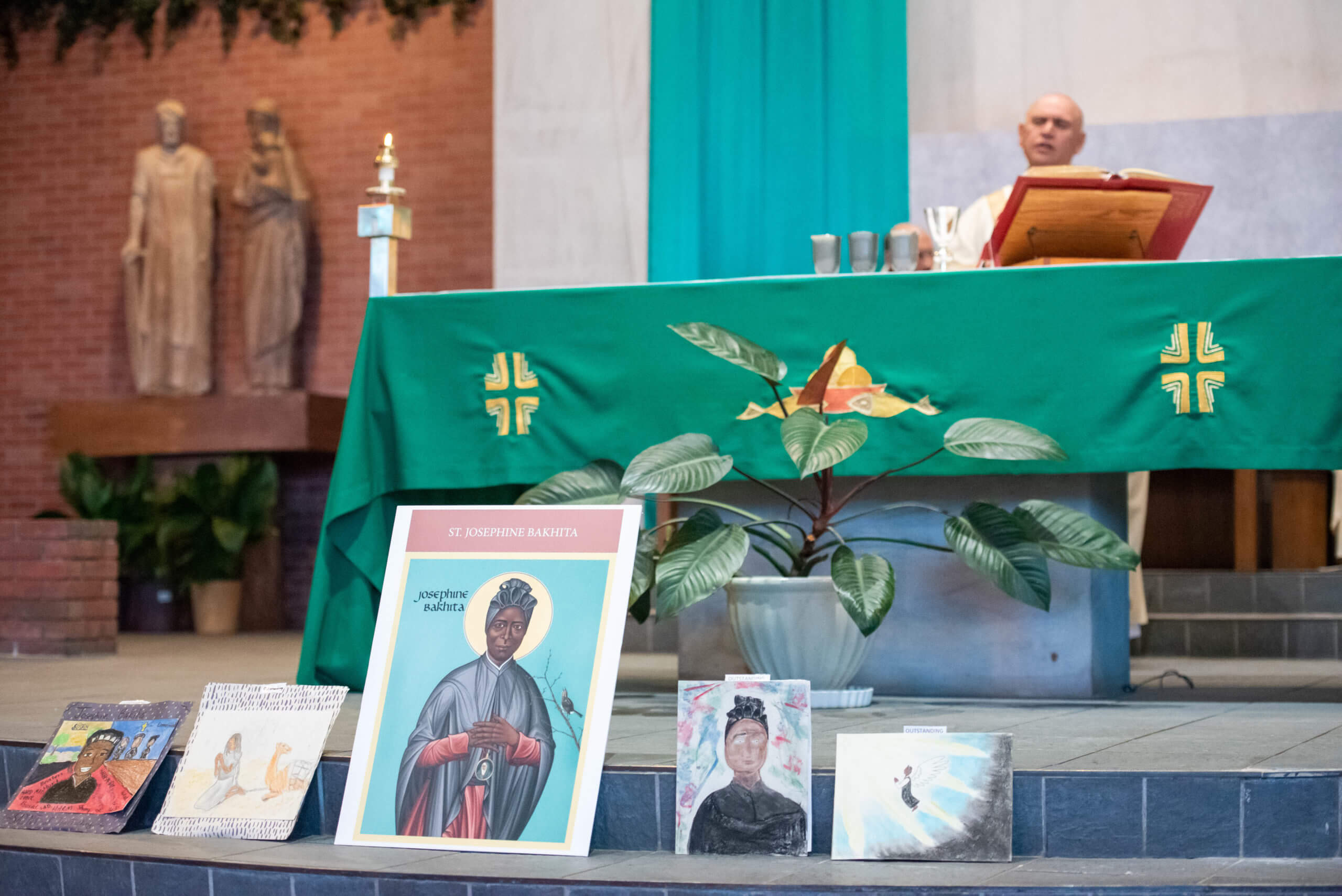 Photo Credit: CNS/Mihoko Owada, Catholic Standard - Images of St. Josephine Bakhita are seen near the altar during a Mass celebrated in honor of survivors and victims of human trafficking at St. Camillus Church in Silver Spring, Maryland, Feb. 8. It was the World Day of Prayer, Reflection and Action against Human Trafficking and the feast day of St. Josephine Bakhita.

Catholic organizations, from women’s religious orders to corporate watchdog groups, are working on many fronts to stem the scourge — and the crime — of human trafficking.

The two most common aspects of human trafficking are sex trafficking and forced labor, although some are victimized by both. But two people interviewed by Catholic News Service also warned of the growing prevalence of organ trafficking on the black market; the practice was depicted in the 2002 movie “Dirty Pretty Things.”

Women religious have been on the front lines of fighting human trafficking, and over the past decade, united their efforts under the name U.S. Catholic Sisters Against Human Trafficking. It is part of a worldwide organization called Talitha Kum, named after Jesus’ instruction to Jairus’ daughter, whom her family believed to be dead: “Little girl, get up.”

According to Jennifer Reyes, executive director of U.S. Catholic Sisters Against Human Trafficking, the U.S. group is one of 52 similar national networks belonging to Talitha Kum — evidence of both the massive scope of human trafficking and of the effort to prevent it and to help those caught up in it.

Felician Sister Maryann Mueller, head of the organization’s education working group, said people will tell her at workshops, “Well, that doesn’t happen here.” “Well, it does happen here,” is her reply.

“A lot more people know more about human trafficking than they did 10 years ago,” Sister Mueller said. “I hope people will be aware of human trafficking — and, specifically, how we are complicit as consumers as people are aware of the dangers of smoking or not using your seatbelts.”

How are consumers complicit? “Anything that we consume,” Sister Mueller said. “Products that we buy, when we go to a restaurant and consume a meal. Even the supply chain.”

“One is forced migration, which makes people vulnerable to human trafficking — unjust immigration law and policy,” said Sister Scholz, who also is associate director of social mission for the Leadership Conference of Women Religious.

Second is “the power differential between men and women in all sectors, which would mean economic, social, familial, political, cultural and religious. And the third we identified was the dominant model of neoliberal development and unfettered capitalism,” Sister Scholz said “That creates situations of vulnerability that are exploited by traffickers and employers and buyers.”

While the motherhouse of Sister Jean Schafer, a Sister of the Divine Savior, is in Wisconsin, she and another member of her order have been in California for the past 17 years ministering to trafficking survivors, including 10 years helping operate a safe house in San Diego. They now live near Sacramento, California, at a parish administered by the Salvatorians, the men’s religious counterpart to their order.

Still, she gives workshops, connects frequently via videoconference with other U.S. sisters who also provide direct services to survivors, and drives to survivors’ homes to teach English.

During one recent presentation, on how grandparents can protect their grandchildren from social media’s ills, “we had one woman at the presentation who attends the youth program at the parish. She said, ‘Actually, I saw something not good with my daughter,'” who was 16 and had a 19-year-old boyfriend who “popped into her life.”

The mother continued: “I didn’t want my daughter to know I was snooping on her. But ultimately, through open conversation and me not being too heavy as a parent, my daughter opened up and said, ‘I think he’s luring me into something. I think he’s grooming me.'”

“This is going on in our school systems,” Sister Schafer said. “We really have to be aware of the undercurrent of what’s happening in social media.”