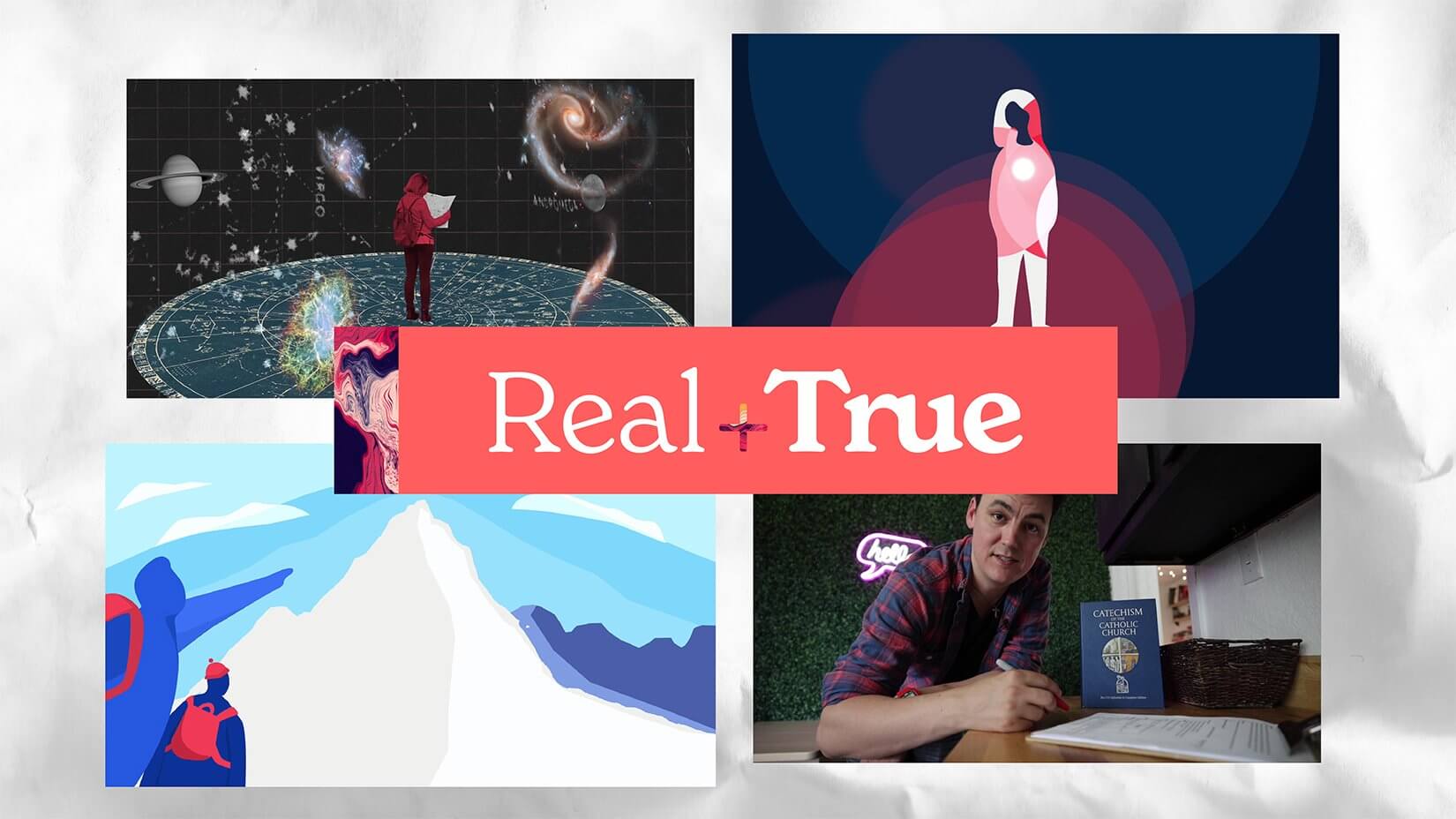 Photo Credit: CNS photo/Real True - This is an image for the global project "Real + True" which aims to to "unlock" the catechism and modernize the way Church teaching is presented to a digital age. Launched Sept. 7, the initiative includes videos, social media content and a podcast organized along the four pillars of the catechism.

When is the last time you cracked open the Catechism of the Catholic Church? Odds are, it’s sitting on your bookshelf collecting dust.

A new global project, Real + True, seeks to “unlock” the catechism and modernize the way Church teaching is presented to a digital age.

The catechism “is not just a technical book,” said Real True co-founder Edmund Mitchell, “but it’s written to really change our relationship with Christ.”

Launched Sept. 7, the initiative includes videos, social media content and a podcast organized along the four pillars of the catechism. Each month a new unit will be released, with 12 units for each pillar, totaling 48 units.

Aimed at millennial and Generation Z audiences, the content is meant to supplement evangelization and catechesis efforts that already exist as well as be a resource to those seeking answers to questions online, said co-founder Edmundo Reyes.

The material is free and available on realtrue.org in English, Spanish, Portuguese and French.

Reyes said the inspiration for Real True came six years ago in Portland, Oregon, when he encountered BibleProject, a nonprofit organization with a library of resources to help people read and understand the Bible.

While the organization isn’t Catholic, he was impressed by their work, which he’d “never seen done in a church setting.” After learning about BibleProject’s creative process, he came back “with the hope of one day doing something similar with the church.”

When Reyes returned home, something unexpected happened. He started watching BibleProject’s videos on his phone and three of his children joined him.

“That moved me in two ways,” Reyes said. “One is a bit of sadness of like man, I’m letting my kid down here, but also a lot of hope that the message that we proclaim, the Gospel message, it’s truth and it’s beauty and it’s attractive in itself. We just need to be able to communicate that message in a way that is relevant to them, in a way that they can understand it.”

The Church is moving in the direction of an “evangelizing catechesis,” said Reyes, citing the example of Pope Francis instituting the ministry of the catechist in May and the Vatican updating the “Directory for Catechesis” in 2020. He sees Real True as participating in that evangelizing catechesis.

Reyes quoted the catechism, which states: “Periods of renewal in the Church are also intense moments of catechesis.” And with the 30th anniversary of the catechism next year, the time seemed ripe to launch the initiative.

Reyes described Real True as a “passion project,” apart from his work as the director of the communications in the Archdiocese of Detroit.

Co-founder Emily Mentock explained that the project’s goal of “unlocking the catechism for the modern world” means bringing the “content of the text into more digital media channels to better reach the audience that we’re after” — people that are not against the church but are curious and open to learning more about their faith.

Mentock, 29, said her own journey back to practicing Catholicism informed her work on Real True. A pivotal step in her story was seeing a tweet quoting Bishop Robert Barron’s sermons podcast.

The tweet piqued her interest, so she started listening to the podcast and eventually “became compelled to go back to Mass and from there became compelled to actually read all the Gospels,” said Mentock, who works as associate director of digital strategy at the Archdiocese of Detroit.

That experience shaped “what I believe in and the ways we can use digital and social media channels as a tool to support that pathway back to Christ,” she said.

Each Real True unit contains three videos — a proclamation video, an explanation video and a connection video — as well as a podcast that is geared toward formal and informal catechists.

Mitchell, 32, who worked in parish ministry for 10 years, said his training in a methodology of catechesis called, “the ecclesial method” by Msgr. Francis Kelly, influenced the approach to developing the structure and scripts of the videos.

The first stage is preparation, he said, by “getting the attention of the heart of someone who isn’t yet ready to hear the catechesis.” The proclamation videos are meant to rouse “spiritual curiosity” and prep the person to have a “burning question on their heart” that connects to the section of the catechism the unit covers.

Then the explanation video goes deeper into the teaching and the connection video applies the material to everyday life. For creating the video topics, Mitchell said he was influenced by podcasts like “Radiolab” and “This American Life” that aren’t Christian but explore the phenomenology of the world.

Using the natural world as a vehicle for questions posed in the videos keeps the content relevant, especially for a global audience, since “the catechism is universal,” said Mitchell.

Funded by a grant from Our Sunday Visitor, the Real True initiative is also seeking donations to translate content into more languages and produce videos at a faster pace.

“The work of evangelization online is significant and important, especially in a world so connected, which is what we saw in the pandemic,” said Reyes.

Isolation is one of the challenges the Church faces today and the initiative organizers hope that by having “content that leads to Jesus,” young people can help “get connected spiritually,” then ideally continue a “journey of discipleship toward true community and communion,” he said.

A video with more information about the Real True project can be found at youtube.com/watch?v=zMlc-2-RyQE.

Share This Post
Evangelization and Catechesis, Catechism of the Catholic Church, Real + True, Edmund Mitchell
See More
Last Article
‘What is the most important lesson your father taught you?’
Next Article
Building St. Anthony Church: The French-Canadians in Burlington’s South End
Back to Vermont Catholic Magazine