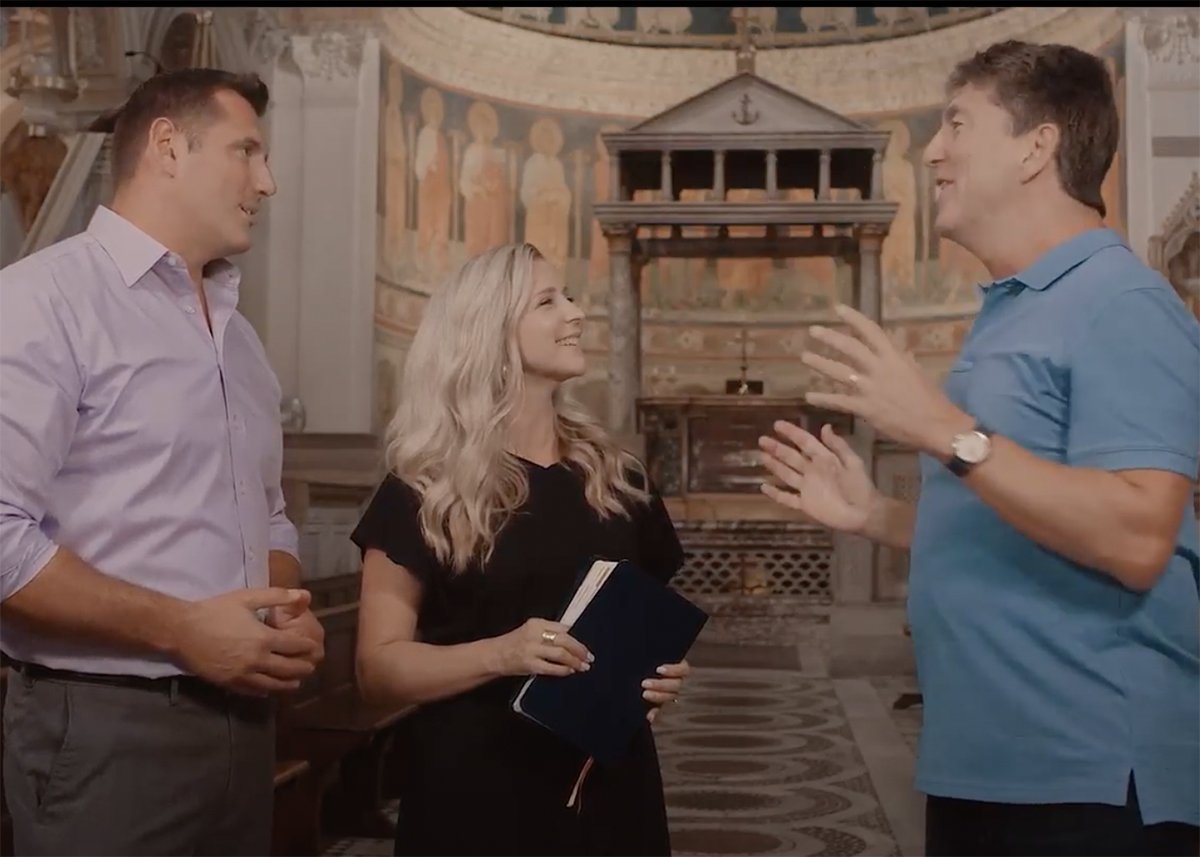 Photo Credit: CNS/courtesy Ascension - Andrew Swafford, left, Sarah Swafford and Marcellino D'Ambrosio stand in a Catholic church in a scene from a video that is part of a new online study course the three co-created called "What We Believe: The Beauty of the Catholic Faith" from Ascension.

A new online study course titled “What We Believe: The Beauty of the Catholic Faith” was “created by a few very imperfect disciples who happen to be crazy about Christ and His Church,” said one of the authors and presenters of the course.

“The goal of the study is not only to instruct but to inspire and reenergize. Catholics who are joyful, excited and informed have very little trouble attracting others, even the young, to the Church,” Marcellino D’Ambrosio told Catholic News Service.

“What is the Catholic Church all about? What does it mean to be Catholic? What do Catholics actually believe?” are some of the questions the 10-session course aims to answer for new Catholics, lifelong Catholics and those considering becoming Catholic.

D’Ambrosio and co-creators and co-presenters Andrew and Sarah Swafford recently filmed the course in Rome for Ascension. The three also wrote an accompanying book with the same title published by Ascension.

The course “was developed to cast a broad net” to meet the needs of Catholics “already hungry to know more about their faith” and non-Catholic Christians “curious about what Catholics believe,” said D’Ambrosio.

“The videos and/or the paperback book can be shared with those who are ‘nones,'” those who claim no affiliation with any religion, he said. The course also has something for those who are non-Christian or come from an atheist background, he added. “In fact the book is a great evangelist giveaway tool.”

He told CNS he has been “sounding the alarm for years about the fact that young people, millennials and Generation Z, are increasingly losing interest in the Catholic Church and organized religion.”

“If you probe a bit, the main reason young people themselves give for this is that they perceive Catholicism and organized religion in general as irrelevant to their real concerns like love, community and adventure,” he said.

“This study presents following Jesus in the fullness of Catholic faith as the greatest of all adventures, a journey made together with others, a journey home, into the heart of One who loves each person intimately and perfectly,” he said.

D’Ambrosio is currently a professor of theology at Catholic Distance University, a private online Catholic university based in Charles Town, West Virginia. A regular guest on both secular and Catholic TV and radio programs, he also is the co-founder and director of the Crossroads Initiative and the author of five books and hundreds of articles.

Andrew Swafford is an associate professor of theology at Benedictine College in Atchison, Kansas. He is host and author of Ascension’s DVD series “Hebrews: The New and Eternal Covenant and Romans: The Gospel of Salvation.” He also is editor and contributor to Ascension’s “Great Adventure Catholic Bible.”

Sarah Swafford is a national speaker and author of “Emotional Virtue: A Guide to Drama Free Relationships.”

“I think most of us have experienced one time or another being caught by surprise by a question or challenge about Catholic teaching and have found ourselves coming up short,” D’Ambrosio said.

“This study will prepare those who participate to have a better answer in these situations and ‘be ready to give a reason for their hope,'” he added, quoting from Chapter 3 of the First Letter of Peter.

He said the course also will correct the misconception he believes most people have, “even Catholics,” that Catholicism is an “‘ism,’ a belief system and a code of ethics taught by an impersonal institution.”

In “What We Believe,” Catholic beliefs and the Commandments “are put in their proper context — a living relationship with Jesus Christ who shares with us everything — His Father, His mother, His Holy Spirit, His inheritance, His righteousness, His entire family that stretches back thousands of years and upward to heaven,” he explained.

The course “lays out the Catholic faith as a rich treasury that is beautiful, liberating and empowering,” he added.

—More information about the online course and the accompanying book can be found at ascensionpress.com/WhatWeBelieve.

Share This Post
Evangelization and Catechesis, "What We Believe: The Beauty of the Catholic Faith", Marcellino D'Ambrosio, Andrew and Sarah Swafford
See More
Last Article
The Gospel at Mass
Next Article
Mater Christi School takes ownership of property
Back to Vermont Catholic Magazine