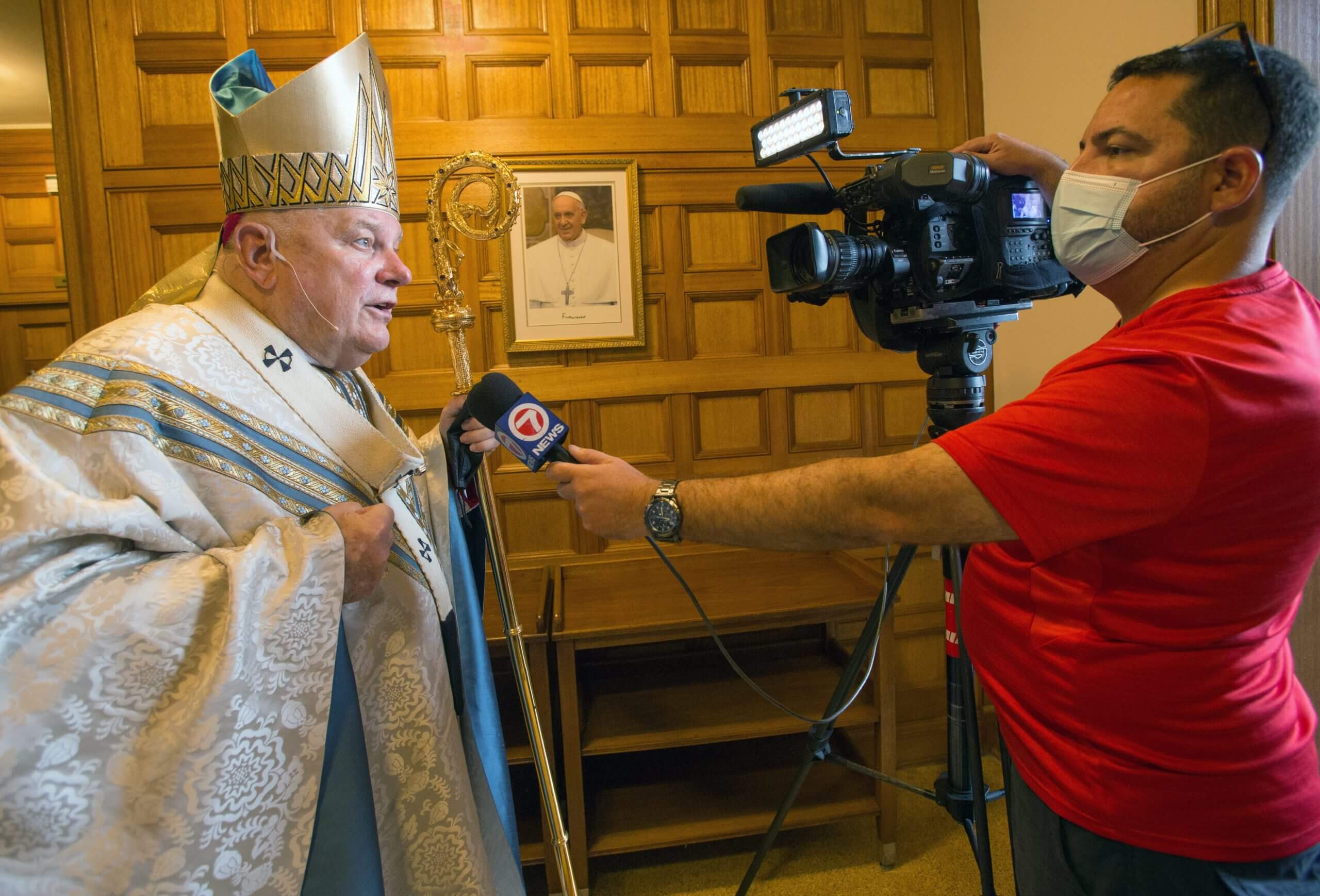 Photo Credit: CNS/Marlene Quaroni, Florida Catholic - Archbishop Thomas Wenski of Miami speaks to the media Aug. 15 at St. Mary Cathedral about the Aug. 14 earthquake in Haiti. The archbishop, who speaks fluent Creole, celebrated Mass at the cathedral in that language for Miami's Haitian community.

The day after a 7.2 earthquake struck Haiti’s southwestern peninsula, Miami Archbishop Thomas Wenski celebrated the 8 a.m. Creole-language Mass at St. Mary Cathedral, praying especially for the victims of the quake.

Noting that Aug. 15 was the feast of the Assumption of Mary, the archbishop addressed Haiti’s history of suffering in his homily and urged those at the Mass to look to Mary for hope.

Archbishop Wenski speaks fluent Creole, as he worked in Miami’s Little Haiti community for 18 years before being made a bishop.

The day the earthquake struck — early Aug. 14 — is memorable for another reason in Haiti: It marked the 1791 beginning of a revolution of Black Haitian slaves.

Dutty Boukman (he had the nickname “bookman,” because he was a literate slave), organized a meeting of slaves in a place called Alligator Wood — Bwa Caiman — where he created a prayer for justice, freedom and human dignity for the enslaved. Boukman asked God to listen to the voice of freedom singing in their hearts, the archbishop said.

“Today, we face another challenge. The country is torn apart. We are divided. Criminals do what they want. Poverty is suffocating us. Everything makes the earthquake worse. Houses destroyed. Today, it’s like a dark night. We don’t see where to go. People are dead. With tears in our eyes, we call to Mary,” the archbishop said.

In addition to the earthquake, Haitians have had to endure the July 7 assassination of their president, Jovenel Moïse. And early Aug. 17, Tropical Storm Grace passed over the southwestern part of the country as well, dumping several inches of rain and complicating quake rescue efforts.

Reports out of the Diocese of Les Cayes say Father Emile Beldor was among those killed in the earthquake. Cardinal Chibly Langlois was injured. The diocesan cathedral, named after the Assumption, was heavily damaged, along with other churches in the area.

Mary Pierre-Saint attended the Miami Mass. Her brother lives in Les Cayes. Although he wasn’t hurt, she heard tragic news.

“I heard that there was a baptism taking place in a church in Les Anglais when the earthquake hit,” she told the Florida Catholic, Miami’s archdiocesan newspaper, after the Mass. “The church collapsed. People were killed. My heart is broken. It’s too much to endure.”

Mary Boileau said she has relatives in Jeremie, on the northwestern coast of Haiti’s Tiburon peninsula.

“I spoke to my family. They told me that my niece hid under a table when the earthquake happened,” she said after the Mass.

The 7.2 magnitude earthquake occurred northeast of Saint-Louis-de-Sud about 20 miles east of Les Cayes, at 8:30 a.m. April 14. Residents of Guantanamo, Cuba to the west, and Jamaica to the south, said they felt tremors as well.

According to Haitian authorities, about 1,400 people have been confirmed dead so far. This earthquake was stronger than the 7.1 earthquake that struck the capital, Port-au-Prince, in 2010, although it affected a more rural, less populated area. The 2010 earthquake killed an estimated 200,000 people and injured 300,000.