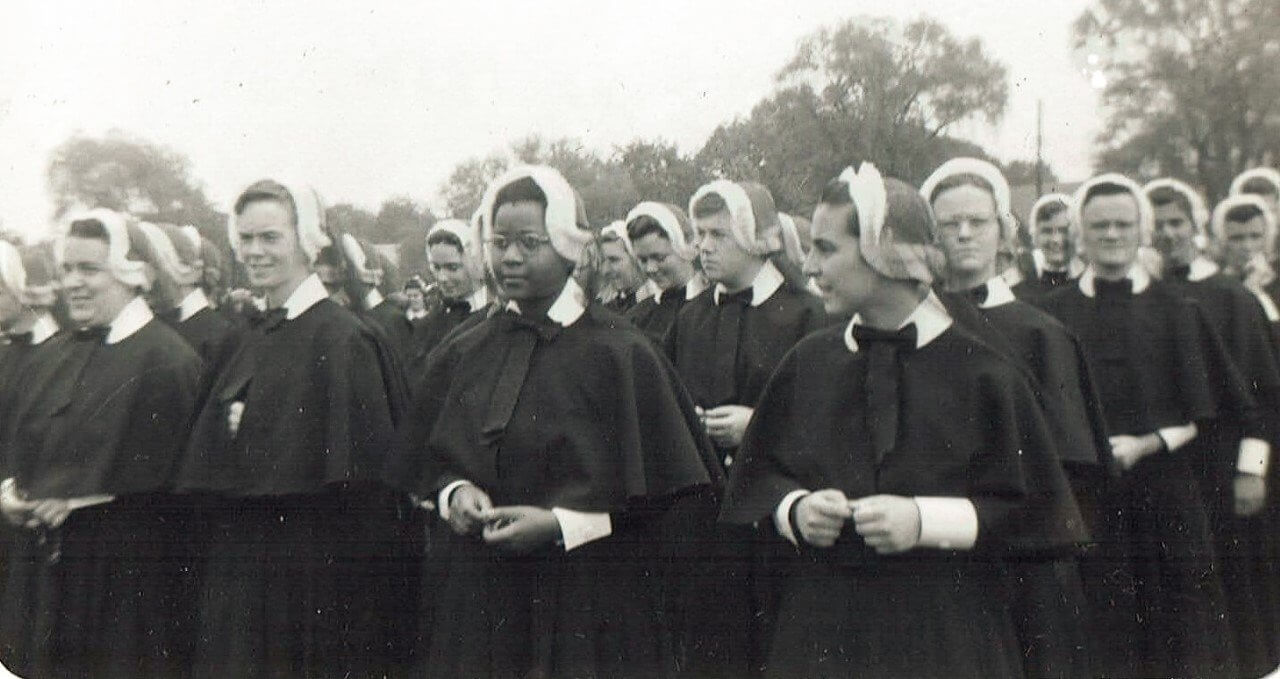 Mercy sister talks about Black Catholicism, her faith and life of ‘firsts’

In 1956, 17-year-old Sister Cora Marie Billings of Philadelphia entered the Sisters of Mercy in Merion, Pennsylvania, becoming the first Black member of the Philadelphia community.

Catholicism has always been a part of Sister Billings’ life, coming from a devout Black Catholic family who fought against racial barriers to fully participate in the Catholic faith and tradition.

Her great-grandfather was enslaved by the Jesuits at Georgetown University in Washington, D.C. His 11 siblings also were enslaved. They were baptized Catholic, and their baptismal records are at Holy Trinity Church in Georgetown.

Sister Billings was the third person in her family to enter religious life. In the 1940s, two of her aunts became members of the first successful Black Catholic order in the United States, the Oblate Sisters of Providence, founded in 1828 by Mother Mary Lange. Her aunts couldn’t join other congregations at the time due to segregation.

Sister Billings said the spirit of her aunts, Sister Mary Paul (formerly Susan Lee) and Sister Mary Agnes (formerly Bertha Lee), her ancestors and her strong devotion to Mary and St. Martin de Porres have remained with her throughout her six-decade ministry as a Black Catholic nun and given her the strength to combat various challenges throughout her life.

In addition to desegregating the Sisters of Mercy Philadelphia chapter, she has achieved several “firsts.”

She was the first Black sister to work as a campus minister at Virginia State University.

She also led the Richmond Diocese’s Office for Black Catholics for 25 years and served as director of the Human Rights Council for Virginia from 2007 to 2010. Billings is also a founding member of the National Black Catholic Sisters’ Conference.

In a Q-and-A interview with Global Sisters Report, Sister Billings discussed her faith, childhood upbringing, call to action for the Catholic Church and more.

Q: What/who drew you to join the Sisters of Mercy versus a historically Black religious order?

A: I joined the Sisters of Mercy because they were one of the seven communities of sisters teaching at West Catholic High School (in Philadelphia) where I went to high school. I found them very hospitable, friendly, happy, and I was drawn to their charism. But I’ve also been asked why I didn’t join the Oblate Sisters of Providence like my aunts did. I did not feel that that was for me. I feel that there’s much more that I’ve been able to do, being where I am.

Q: Can you recall any childhood memories that impacted your faith and spirituality? Did your family have any favorite prayers, songs or rituals?

A: I was an only child, and from third to eighth grade, I went to an elementary school in West Philadelphia in an area called the “Black Bottom.” It was the real bottom of West Philly, and it was a predominantly Black community. It wasn’t seen as one of the best neighborhoods in the area. When I went to school, I would be by myself. I walked eight blocks or more to school each day.

I had great devotion to Martin de Porres, and at the time he was “Blessed.” He was the only Black saint that we had. So, for me, that’s showing some of the racism in the church because the other saints that were canonized in the last 10 years or so only died like 20 years ago. Martin died in 1639, and he wasn’t canonized until 1962.

Martin was very close to me. I would pray and talk to him while walking to school. My school was predominantly white Irish with over 2,000 students. Probably only about 14 of us were African American, so I needed some connection to my own identity.

Catholicism has always been a part of me, and I tell people that I really would never have been able to be in and stay and live the life that I have if it wasn’t for my faith. Even in grade school, going to school, the presence of prayer, faith and God were there.

One of the most important prayers for me and my mother was the rosary. Part of that is I have great devotion to Our Lady because that’s who I’m named after. My name means “heart of Mary.” People think that name was given to me in religious life, but I was baptized with that name.

Q: What does Black Catholicism mean to you?

A: It means that I must, first, acknowledge that my culture, self-expression and identity are different than maybe a white person. Every person of color, or every African American, is not the same as me. I’m a Black Catholic. I must look at what I’ve come from, what I’ve experienced, and the impact that it has on me. I encountered racism, but it doesn’t mean that it has to destroy me. Instances like that helped change me, and they helped me to look at things a little bit different.

One word that I’ve been saying a lot is intentionality. I feel that we need to be intentional and very specific about what we’re doing and why we’re doing it. We need to do our homework because what I’m finding sometimes in situations, people will be out there marching, and they don’t even know why they’re marching.