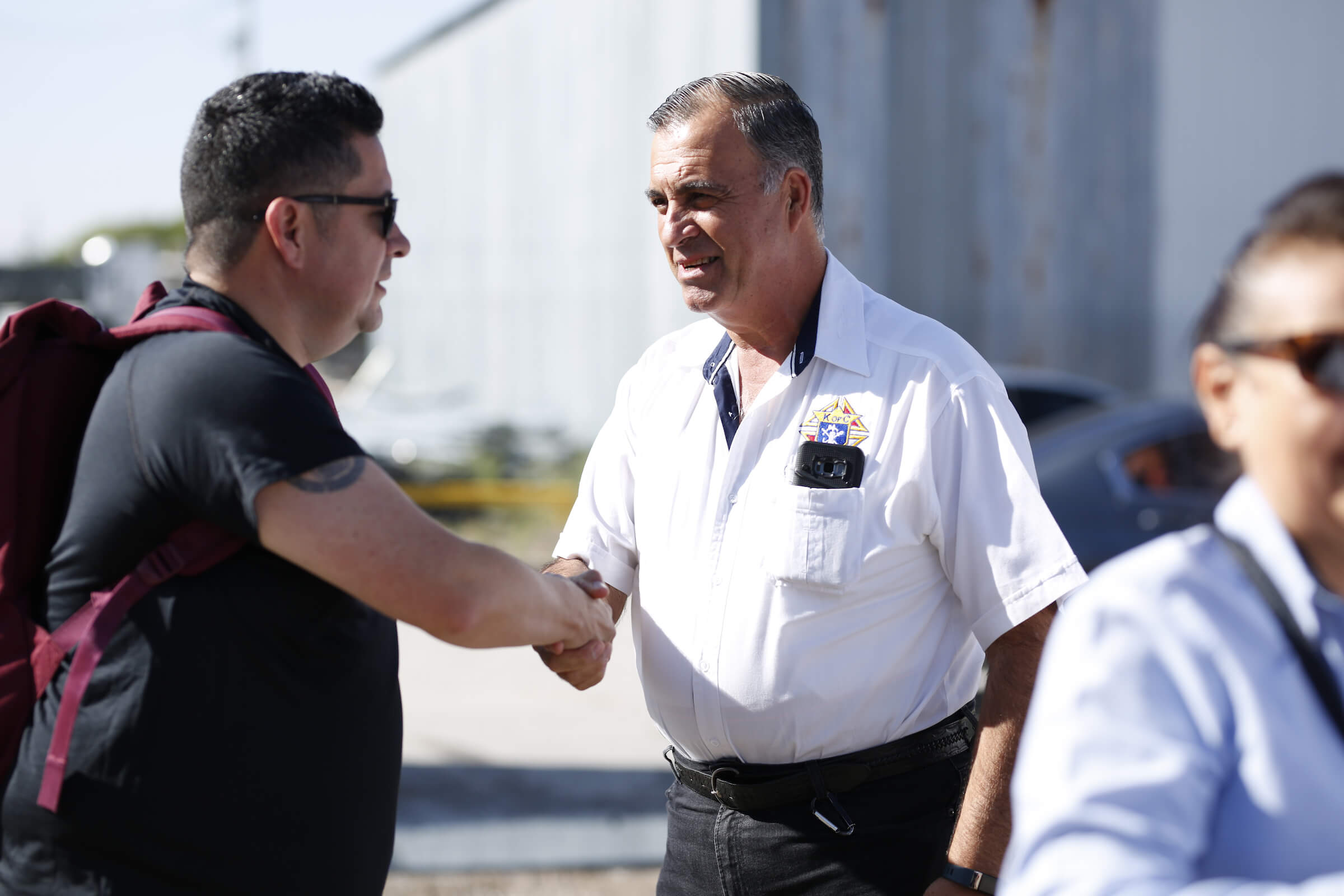 Knights from Texas and Mexico bring supplies to Juarez

A lot of good work and much insight can come from trying to solve a relatively small or everyday kind of problem.

“The key moment for us in trying help the migrants along the southern border came when we realized that we needed to buy a shower for use in a shelter that was being supported by our El Paso councils and local parishes,” said Knights Supreme Director Terry Simonton.

The Knights had already been providing supplies, cooking meals and paying for a rented shower.

“It made much more sense to buy a shower but, at $9,000, we had to turn to the Supreme Council for help as the El Paso Knights and parish funds had become depleted,” said Simonton, a past state deputy in Texas. “The response we got back from New Haven was ‘Yes, but that’s not enough. We must do more.”

A few days later, Supreme Knight Carl Anderson announced at the order’s international convention in August that, “We are launching a new initiative — one focused on the crisis on America’s southern border.”

He said, “The entire Knights of Columbus has joined the efforts of individual Knights and local councils as they come to the aid of migrants along the border. “

The new initiative was on display Oct. 5 when a caravan of Knights of Columbus from Texas and Mexico came to the aid of those in need at Casa del Migrante, delivering a truckload of supplies valued at $61,000 that included medicine, food, water, diapers and shoes for the facility in Juarez, Mexico.

Joselyn Ceron, a migrant from Guatemala looked on and smiled along with her young son, Edison. She conceded that smiling has not come easy during her recent travails.

“The situation in my country is uncertain and we have suffered much to get here,” said Joselyn. “But God bless the people who have been willing to help us.”

The Casa is operated by the Diocese of Juarez. More than 40 Knight-volunteers were joined by Bishop José Guadalupe Torres-Campos of Juarez and El Paso Bishop Mark Seitz in making the delivery.

“When Carl Anderson announced this initiative, he was very clear and I thought his point was extremely important. This is not about politics,” said Bishop Seitz. “This is about what Christians do. Let the politicians figure out how they want to manage the border. It is for Christians to see their brother, their sister, their children in need and to respond.”

The effort is also consistent with the Knights’ long history of coming to the aid of those in need and those who are displaced, including most recently in the Middle East and Ukraine.

The recent delivery of supplies to Juarez follows gifts for humanitarian aid of $100,000 and $50,000 to the Texas Dioceses of El Paso and Laredo, respectively.

“The migrants are people who have [experienced] many losses,” said Father Javier Salazar, director of Casa del Migrante. “What can we do to help them? Many things but they all spring from charity.”

Bishop Torres-Campos of Juarez agreed. “The example that the Knights of Columbus has given us,” he said, “is a gesture of charity, of fraternity, of generosity.”

The migrants, who are now mostly housed on the Mexican side of the border, come from Mexico, throughout Central America and other nations and regions, including Africa, Haiti, Cuba, and some from South America and Europe.

The Knights who helped unload the supplies spoke of their satisfaction at making the delivery and spending some time with the migrants.

Fellow Knight Alfredo Daniel Garcia Cano said “it‘s important to me to put my faith into action, to know that my faith has an effect on my community and on the people who most need it.”

“What a beautiful thing to find a group of men that desire to serve, and to come together with the migrants and, yes, have a good time,” said Bishop Seitz. “They can say, ‘I belong to a group that’s really making a difference in the world.’”