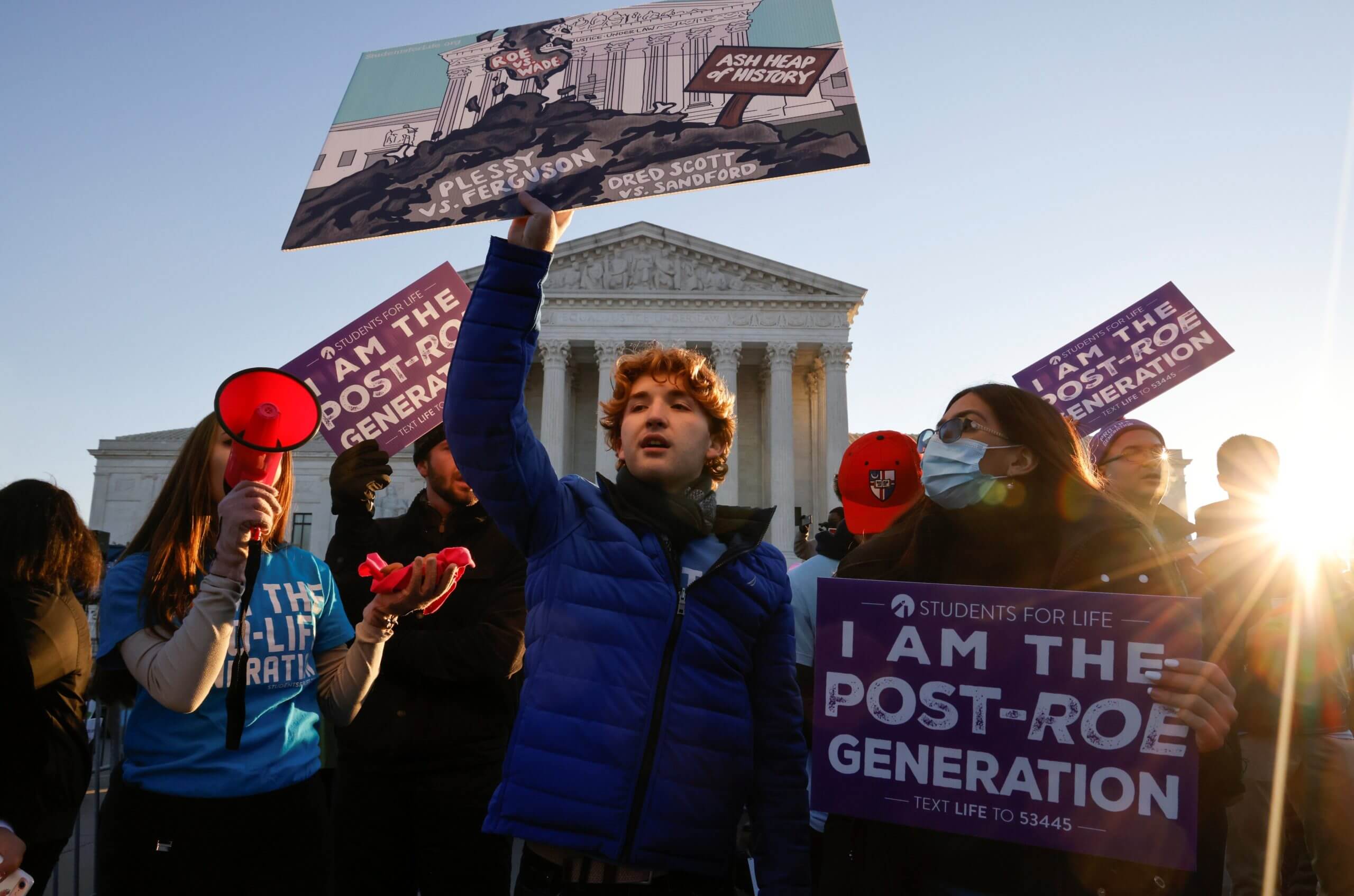 Photo Credit: CNS/Jonathan Ernst, Reuters - Pro-life activists and other supporters protest outside the U.S. Supreme Court building in Washington, D.C., Dec. 1, ahead of the court hearing oral arguments in the case Dobbs v. Jackson Women's Health Organization, an appeal from Mississippi to keep its ban on abortions after 15 weeks of pregnancy.

In the Supreme Court’s first major abortion case in decades — which looked at Mississippi’s ban on abortions after 15 weeks of pregnancy — the majority of justices Dec. 1 seemed willing to let that ban stay in place.

But it was unclear if they would take this further and overturn Roe.

While the justices considered the state law and the possible ramifications of supporting it or not, people on both sides of the issue were on the steps of the Supreme Court revealing the divide on this issue by what they were shouting or with their placard messages calling abortion murder or an essential right.

At several points during the argument, Chief Justice John Roberts continued to bring the focus back to the question at hand: the 15-week ban on abortions in Mississippi, which was struck down by a federal District Court in Mississippi in 2018 and upheld a year later by the New Orleans-based U.S. Court of Appeals for the 5th Circuit.

A 15-week ban is not a “dramatic departure from viability,” Roberts said.

Roberts seemed hesitant to take this further, asking if the court were to overturn Roe v. Wade, if it also would be asked to reconsider several other cases that people could say have been wrongly decided.

And that discussion of previous court decisions, the use of “stare decisis” came up frequently. The term, which literally means to stand by things decided, was used in reference to previous abortion cases but also several other cases with some justices pointing out that precedence should not always be a deciding factor and that some cases did need to be overturned.

Justice Stephen Breyer indicated the court was treading on contested ground and was concerned that its decision could be seen as merely being political.

Justice Sonia Sotomayor took this a step further, saying the court would be seen as highly politicized if it were to overturn Roe and other related rulings. “Will this institution survive the stench that this creates in the public perception that the Constitution and its reading are just political acts?” she asked. “I don’t see how it is possible.”

But as the arguments continued, more reflection seemed to be on the issue of abortion itself and the possibility of bringing the issue “back to the people,” as Mississippi Solicitor General Scott Stewart suggested.

Stewart stressed that Roe and Casey court decisions  “haunt our country” and “have no home in our history or traditions.”

Roe v. Wade is the 1973 decision that legalized abortion. Casey v. Planned Parenthood is the 1992 decision that affirmed Roe and also stressed that a state regulation on abortion could not impose an “undue burden” on a woman “seeking an abortion before the fetus attains viability.”

Justice Brett Kavanaugh emphasized the court was being forced to “pick sides” on a contentious issue and questioned why the court had to be the arbiter here.

“The Constitution is neither pro-life nor pro-choice,” he said, noting that it “leaves the issue to the people to resolve in the democratic process.”

Justice Clarence Thomas asked what those opposed to the state ban thought was the constitutional right to an abortion, and Justice Samuel Alito spoke of the fetus having “an interest in having a life.”

Julie Rikelman, of the Center for Reproductive Rights, who represented the Jackson Women’s Health Organization in its challenge of Mississippi’s abortion law, said keeping the law in place would cause “profound damage to women’s liberty, equality and the rule of law.”

U.S. Solicitor General Elizabeth Prelogar went on to argue that overturning the court’s previous abortion rulings would have “severe and swift” effects causing abortion restrictions in other states.

If the court sides with Mississippi, it would be the first time the court would allow an abortion ban before the point of viability and could lay the groundwork for other abortion restrictions that other states could follow.

The U.S. Conference of Catholic Bishops, in a court brief supporting Mississippi, stressed that abortion is not a right created by the Constitution and called it “inherently different from other types of personal decisions to which this court has accorded constitutional protection.”

Referring to the court’s major abortion decisions, the brief warned that if the Supreme Court “continues to treat abortion as a constitutional issue,” it will face more questions in the future about “what sorts of abortion regulations are permissible.”

Just as the arguments started, the USCCB issued a statement from Archbishop William Lori of Baltimore, chairman of the Committee on Pro-Life Activities, which said: “We pray that the court will do the right thing and allow states to once again limit or prohibit abortion and in doing so protect millions of unborn children and their mothers from this painful, life-destroying act.”

A ruling in the case is expected in July.