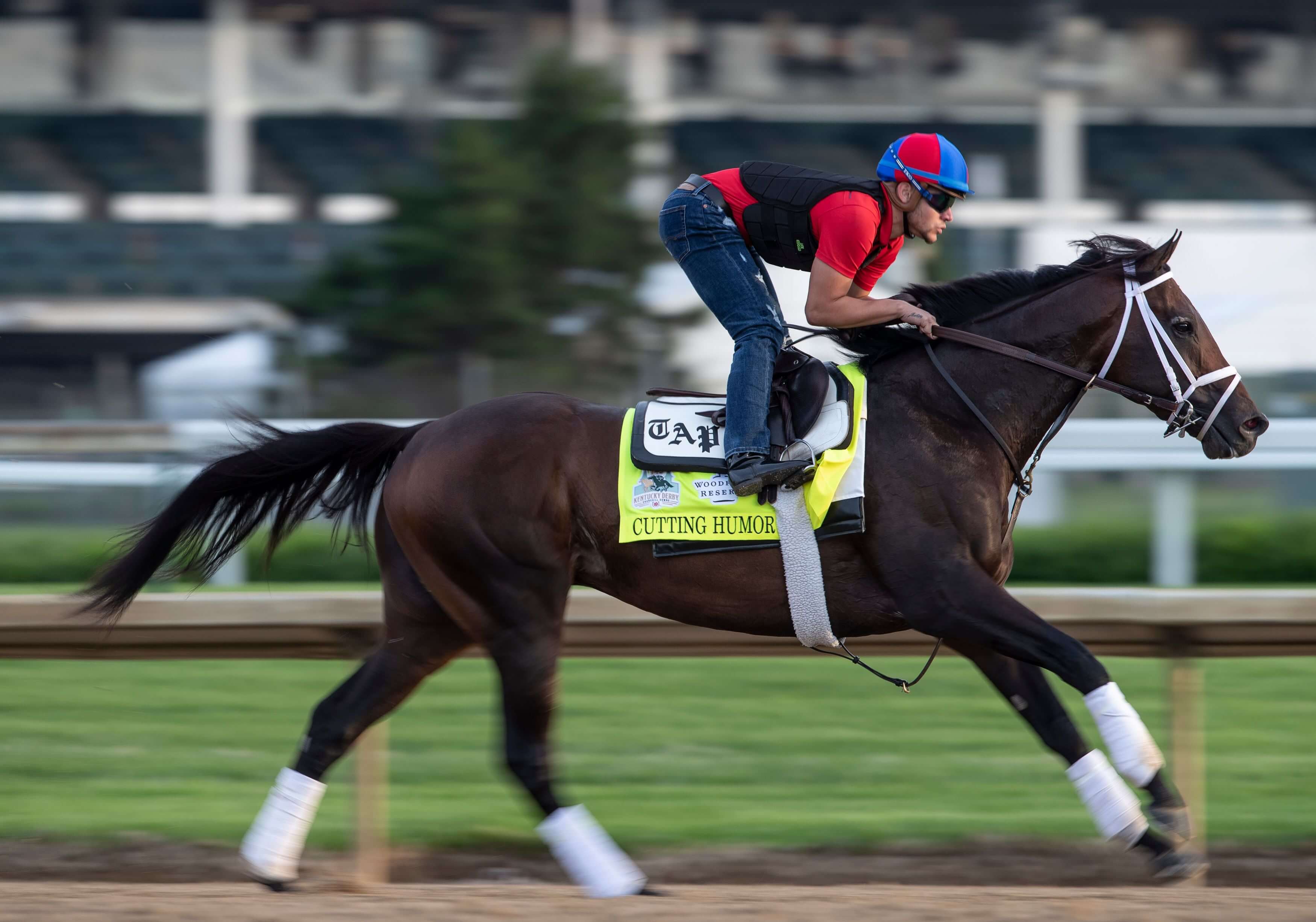 Photo Credit: CNS/Pat McDonogh, USA TODAY Network via Reuters - Cutting Humor gallops across the Churchill Downs track during a morning workout in Lousville, Kentucky, May 1. Catholic Jockey Mike Smith, who will ride Cutting Humor in the Kentucky Derby May 4, prays before every race, but he doesn't pray to win.

Jockey Mike Smith, a Catholic who rode Justify last year to a Triple Crown victory, prays before every race, but he doesn’t pray to win.

The 145th Run for the Roses on May 4, when he plans to try for his third Kentucky Derby win, is not going to be any different.

“It can be a dangerous sport. I don’t pray to win, I just pray for safety,” Smith said during a phone interview two days after riding Omaha Beach to victory in the April 13 Arkansas Derby.

Initially, he was set to ride Omaha Beach, a colt favored to win with 4-1 odds, but the horse was scratched from the race May 1 due to a respiratory condition. On May 3, it was announced that Smith would be in the Kentucky Derby after all, riding Cutting Humor, a 30-1 long shot, replacing the original jockey.

The Hall of Fame jockey credits his faith in God and hard work for his successes.

“My faith is my life, not a part of my life. Everything else is a part of it,” he told The Record, archdiocesan newspaper of Louisville.

He said he doesn’t like to get the day started without prayer and that he also prays all day for whatever crosses his mind.

“It’s funny, it’s always been that way. I remember praying when I was in school, sometimes praying that I wouldn’t get in trouble,” he said with a laugh.

Ahead of the glitz and glamor of Louisville’s most famous week, Smith headlined the Race for Grace charity dinner April 29 at Churchill Downs, Kentucky Derby’s racetrack.

Funds raised at the event, hosted by the Kentucky Race Track Chaplaincy, support the men and women who work on the backside of racetracks in Kentucky, including Churchill Downs.

Smith said he has a great deal of respect for the work of the chaplaincy to support track workers.

The jockey was born and raised on his family’s ranch in New Mexico and knew from a young age his future would center on horses.

“As far back as I can remember, I always had a horse. While other kids got bikes, where I’m from, everyone got a horse,” he said.

His parents and grandparents were the first teachers of his faith, he noted. His grandmother, Rosita Vallejos, in particular, instilled in him a love for the Catholic faith.

“She, without a doubt, was the strongest influence on my faith. She prayed with me before bed when I was little. She taught me prayers in English and Spanish,” he recalled.

“My faith means everything to me. I would not have anything if I didn’t have it,” he said. “Life wouldn’t be worth living without my faith.”

The jockey said he believes “we are put here to do the great things the Lord wants us to do — to help others if we can, be there for people, love people, to be humble, gracious, kind, considerate, caring.”

His racing pedigree is well known to those who follow horse racing. He began racing in the early 1980 and was inducted into the National Museum of Racing and Hall of Fame in 2003.

In 2005, he rode long-shot Giacomo to victory in the Kentucky Derby. And in 2018, when he rode Justify at age 52 to a Triple Crown, he became the oldest jockey to win the title.

When he’s at home in Southern California, he attends St. Rita Church in Sierra Madre, where he has been a parishioner for about 15 years.

And with all his successes in horse racing, he said, he’s still not done.

“It’s who I am. There’s nothing like it,” he said, adding that nothing compares to the “thrill of riding an amazing athlete like a horse, especially when you are crossing the wire.”