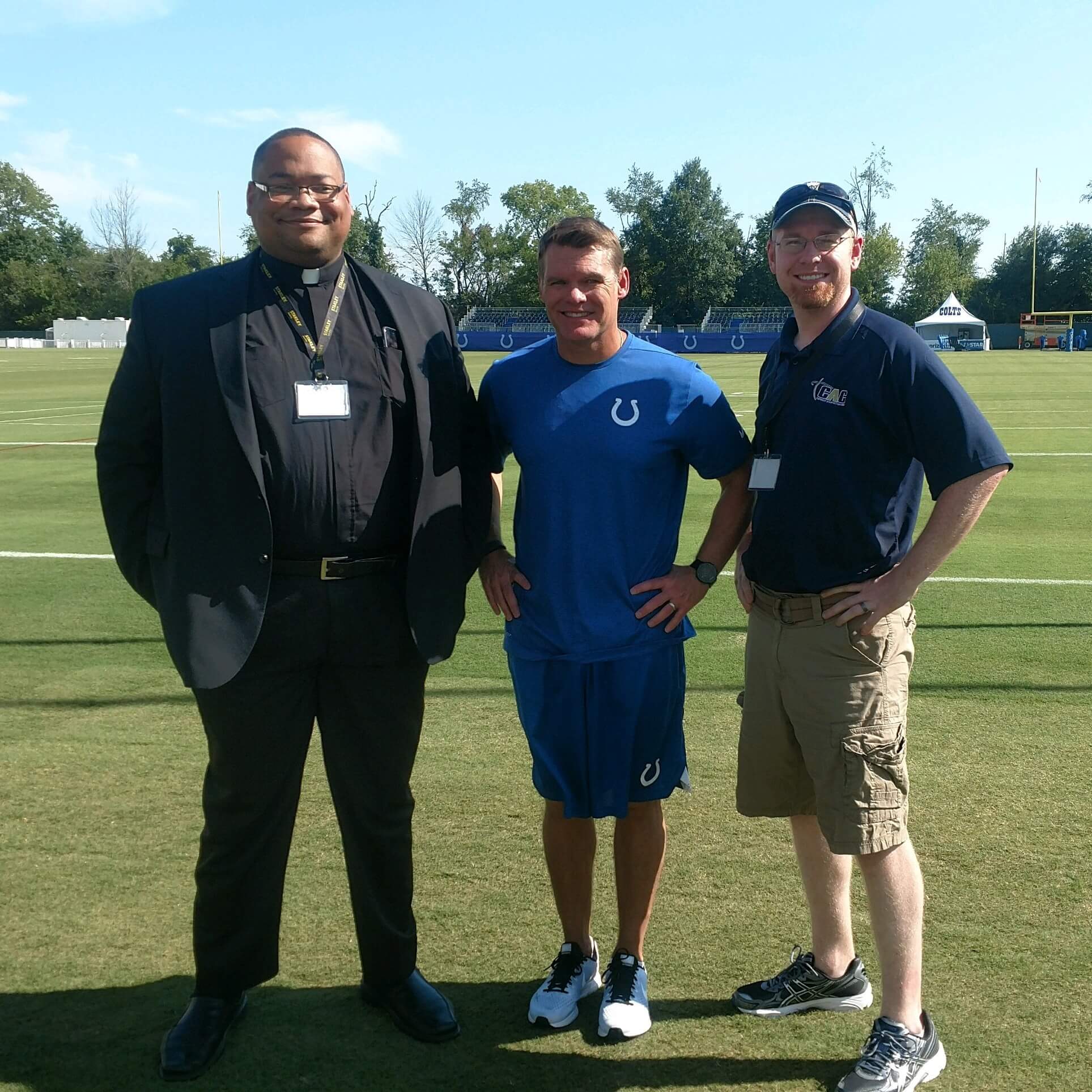 As the Catholic chaplain for the Indianapolis Colts, Father Douglas Hunter has access to the training facility, the team meetings and the sidelines during games. He’s even there in the locker room when head coach Frank Reich talks to the players, including the times the Colts’ leader has shared this constant message: “Get 1 percent better every day.”

Father Hunter also stays in contact with Chris Ballard, the Colts’ general manager and a fellow Catholic, in good times and in bad, such as the Sept. 8 season-opener, a 30-24 overtime road loss to the Los Angeles Chargers.

Father Hunter, as keynote speaker at a 15th anniversary celebration dinner Aug. 27 of Catholic Radio Indy, said his choice to become a priest — he was ordained in 2016 — led to a phone call he never expected.

“About two years ago, I received a call from the now-late Father Glenn O’Connor. He said, ‘the Colts are looking for a chaplain, and I think you would be great.’ I said, ‘Me?’ He said, ‘Yeah, you. They need a big guy over there, and you’re the biggest one I found.'”

Father Hunter was honored by Father O’Connor’s faith in him and drove to the Colts’ complex for an interview with Ballard, not knowing at the time who Ballard was.

“It was not intimidating at all,” Father Hunter recalled about that meeting. “We talked about faith more than we talked about football. I thought, ‘I like this guy. This might work out.’

Father Hunter met with Joe Reitz, a former offensive lineman for the Colts who is also Catholic, and who advised the priest just to be with the players and talk with them.

“So I started going to the training facility. I started going to the training camps. I’m there on the sidelines. After talking with Joe and then talking with Chris again, I start finding out who my Catholics are. There’s a few here at Mass. There’s a few more there. And then I start finding out other staff members who are Catholic. And I start inviting each and every single one of them to the liturgy that we have at the hotel” on the evenings before home games.

He recalled the time one of the Colts introduced himself, which led to a conversation in which Father Hunter focused on him as a person instead of as a football player.

“When others saw that I was talking and sitting with him, then others started coming by and started talking more and more and more. I found the best time to talk to these guys is at lunch time. One, I get a free meal. And two, we can talk,” he said.

“Basically, it’s exposing the faith to them but not imposing it upon them. When you do that, you’re not as threatening,” he added.

“I had one guy showing me how to throw a football. That gives us a chance to talk about the faith. And the more I talked to him, the more I realized this guy is Catholic. He’s also introducing his girlfriend to the faith, which is wonderful because they’re talking about marriage within the Catholic Church.”

Father Hunter explained his approach to the players this way: “I know them by name, not by fame or fortune.”

“Approaching them in their humanity,” he told the audience: “I don’t care what kind of car they drive, how much money they make or where they’re from. I’m just treating them as Jesus would treat them.”

He said sometimes when he finds out they’re injured, he will call, text or write a note and put it in their mailbox, telling the players he is thinking about them and that they can call if they need anything.

He also encourages the players to be there for others and to share their commitment to their faith, reminding them they have a platform that no one else has.

“A lot of these guys are not as apt to sharing their faith publicly as many of us think they would. I tell them I see you have 50,000 people plus on social media. You could spread the word, or you could evangelize or show people how you’re a disciple of Christ. They say, ‘Oh, OK.’ They try it, and they do it.”

He told the audience that at one point, he struggled with his ministry, wondering what he was doing there, and just at that moment a player asked to speak with him.

It turned out the player wanted to learn more about the Catholic faith and showed an interest in participating in the Rite of Christian Initiation of Adults program. The player and the chaplain had a long talk as they walked together from the practice field. Their conversation ended with the player thanking Father Hunter for taking the time to talk.

Then at lunch, he talked with another player who told him about his life.

“We never talked football,” Father Hunter said. “When I got to my car, I said, ‘OK, Lord, I see how it is you’re working through me. And I really appreciate that.'”

As he put it, the job really is “just being there for them. It’s a ministry of presence, just showing them that Jesus loves them, that someone cares about them, that someone wants to actually know who they are on that personal level.”