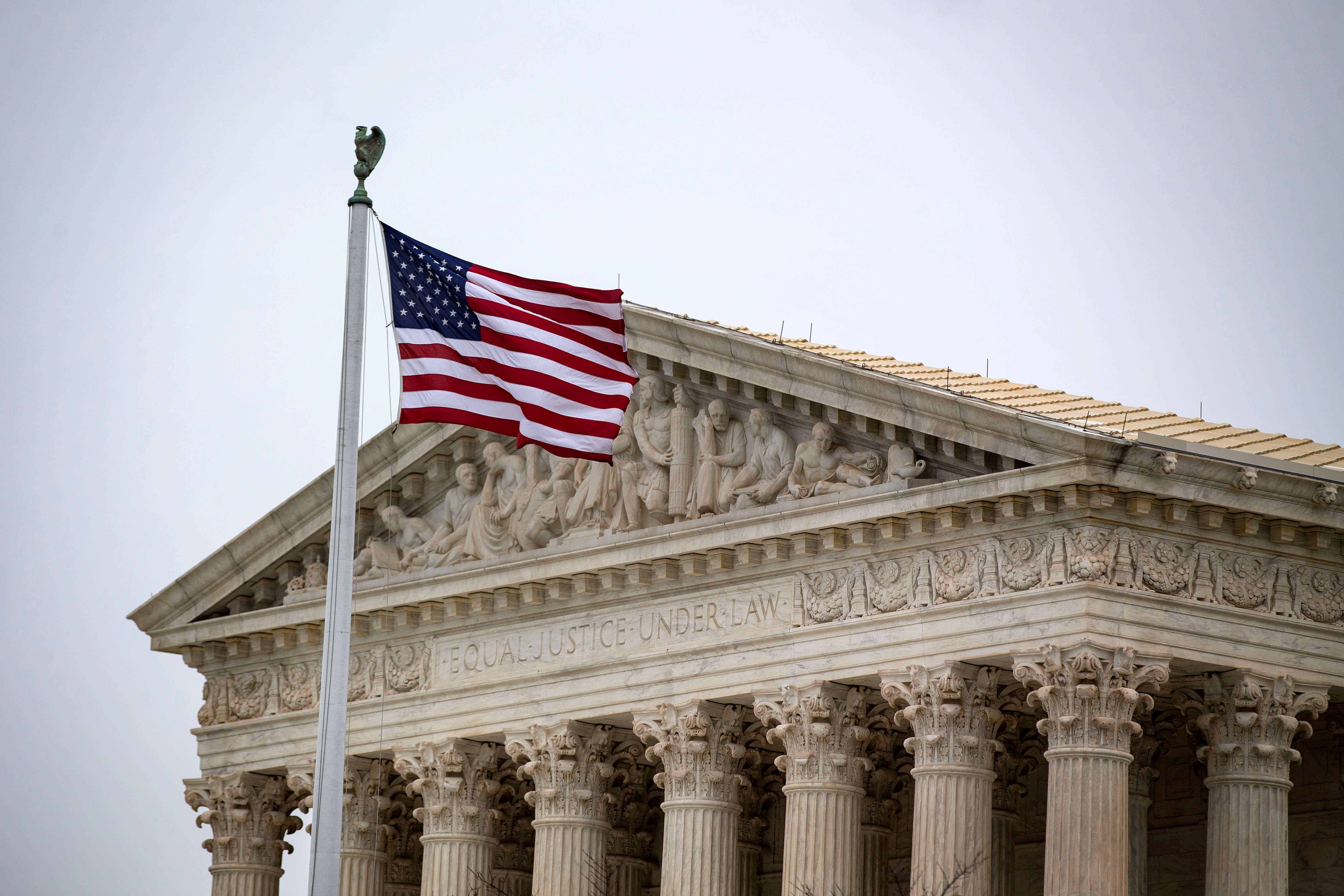 Photo Credit: CNS/Al Drago, Reuters - An American flag flies outside the U.S. Supreme Court in Washington, D.C. Since the court's new term began in October, the justices have heard cases on the Deferred Action for Childhood Arrivals program, workplace discrimination based on sexual orientation, gun ownership restrictions and the death penalty. In June, the justices issued several decisions, including one to allow a religious symbol to remain on public land and another to overturn an inmate's death sentence citing racial bias in the prosecutor's jury selection.

This has been a busy year for the U.S. Supreme Court.

In its new term, which began in October, the justices examined the status of the Deferred Action for Childhood Arrivals program, known as DACA, workplace discrimination based on sexual orientation, gun ownership restrictions and, as it does most terms, the death penalty.

The court also agreed this term to next year review a Louisiana abortion law requiring abortion providers to have admitting privileges at local hospitals and a school choice program in Montana that excludes religious schools.

In rulings issued in June, at the end of its previous term, the court permitted a religious symbol on public property, blocked the Trump administration from adding a citizenship question to the 2020 census and overturned an inmate’s death sentence, citing racial bias in the prosecutor’s jury selection.

In the religious symbol case, the justices in a 7-2 vote favored preserving a historic cross-shaped memorial in Maryland, saying it did not endorse religion.

The majority opinion, written by Justice Samuel Alito, said the memorial, which pays tribute to soldiers who died in World War I, should be seen in the same “historical context” as the white crosses marking the overseas graves of soldiers who lost their lives in that war. He also said removing the memorial “would be seen by many not as a neutral act but as the manifestation of a hostility toward religion that has no place in our Establishment Clause traditions.”

As they wrapped up their term in June, the justices also blocked an added citizenship question to the census, a move that the U.S. bishops and other Catholic leaders praised and the Trump administration initially disputed.

The 5-4 ruling — written by Chief Justice John Roberts and joined in part by the other justices — sent the case back to a lower court saying the administration’s reason for adding the citizenship question “seems to have been contrived.”

In briefs objecting to the added question, immigrant advocacy group, Catholic Charities of the Archdiocese of New York and Catholic Charities of Brooklyn and Queens in New York said it would prevent noncitizens from filling out the census and would cause a reduction in funding and impact social service agencies.

A statement issued by the U.S. Conference of Catholic Bishops on the day of oral arguments stressed the importance of an accurate count, noting that the Catholic Church and other service providers rely on the national census to provide an accurate count to effectively serve those in need.

In late July, it said the Trump administration could use $2.5 billion in Pentagon funds to pay for construction and repairs of a wall along the U.S.-Mexico border. In mid-September, it allowed the Trump administration to enforce its new rule preventing many Central Americans and other migrants seeking asylum in the United States to apply for asylum at the border, while the legal battle over the issue continues to work its way through the courts.

This rule basically bars asylum-seekers from applying for protection at the U.S. southern border if they went through another country en route to the United States without first applying for asylum in that country.

Justice Sonia Sotomayor, in her five-page dissent, said the administration’s ban on asylum-seekers “topples decades of settled asylum practices and affects some of the most vulnerable people in the Western Hemisphere” and comes at a time when the stakes for asylum-seekers “could not be higher.”

The nonprofit group Hope Border Institute, based in El Paso, Texas, said the court’s decision reflects “a disturbing pattern that emerges when the Supreme Court starts using its power, however temporarily, to greenlight Trump’s anti-immigrant agenda.” It also said the “human impact of this decision will be devastating to thousands of refugees who see the possibility of safety, security and freedom at our nation’s border.”

The administration’s rule: “Asylum Eligibility and Procedural Modifications” was published July 15. In a public comment filed Aug. 15 with the Executive Office for Immigration Review, a group of more than 250 faith leaders and organizations, including several Catholic groups, called the rule a “a backdoor asylum ban” and urged the administration to end it.

This fall, all eyes were on the court for how it would respond in the high-stakes immigration case on DACA.

On Nov. 12, the court heard oral arguments on three separate appellate court rulings that have blocked Trump’s 2017 order to end DACA, established in 2012 by President Barack Obama through an executive order. The program has enabled about 700,000 qualifying young adults, who arrived in the U.S. as children without legal documentation, to work, get health insurance, a driver’s license and above all, not face deportation.

At issue before the court — while DACA supporters including Catholic activists rallied outside — was how the Trump administration went about trying to end DACA.

Catholic leaders joined more than 35 other groups in filing friend-of-the-court briefs urging the court to uphold DACA. This view was reiterated in a Nov. 12 statement by Bishop Joe S. Vasquez of Austin, Texas, then chairman of the USCCB’s Committee on Migration.

“Ending DACA,” he said, “would disrupt DACA recipients’ continued contributions and integration to our country and could needlessly separate them from their families. Not allowing these young people to continue to utilize DACA to reach their God-given potential is against the common good and our nation’s history of welcoming the immigrant.”

A decision is expected next June.

At the end of its last term and as the new term began, the court once again examined death penalty cases.

In a June decision, the court overturned the death sentence of a Mississippi African American man who had been tried six times for a quadruple murder charge.

Sister Helen Prejean, a Sister of St. Joseph of Medaille, who is a longtime opponent of the death penalty, said the case “pulled the curtain back on racism that persists in jury selection in Mississippi and across the country. This form of discrimination costs people their freedom and, in capital cases, their lives.”

On Dec. 6, the court issued an order which left in place a preliminary injunction prohibiting the government from carrying out the first federal executions in 16 years. A federal judge in November temporarily blocked upcoming executions of four federal death-row inmates, who had challenged the constitutionality of the lethal injection protocol to be used in their executions.

The day before the court’s order, Catholic Mobilizing Network, the national Catholic organization working to end the death penalty, delivered a petition to President Trump and Attorney General William Barr opposing the planned restart of federal executions. The petition was signed by nearly 3,000 Catholics including retired Archbishop Joseph A. Fiorenza of Galveston-Houston, Auxiliary Bishop William J. Justice of San Francisco and Sister Prejean.

The court was to hear another death penalty case Dec. 11: the appeal of an Arizona death-row inmate who claims the state courts failed to give him a new sentencing hearing based on current law.

In early December, the court heard its first gun rights case in almost a decade, brought by New York City licensed gun owners challenging a regulation that puts limits the ability to transport firearms outside the home. The suit was first filed in 2013 and the New York state has since made some modifications to the regulation.

Gun rights advocates hoped the court was prepared to extend its previous rulings on gun laws to further strengthen gun rights for self-defense use at home.

Catholic leaders did not weigh in on this, but the USCCB has supported measures addressing gun violence that include regulations and limitations on the purchase of handguns.

On the second day of the court’s new term, the justices heard oral arguments from three cases concerning protections for gay, lesbian and transgender employees under Title VII of the Civil Rights Acts.

The federal law that prohibits employers from discriminating against employees on the basis of sex, race, color, national origin and religion. At issue in the case is whether the section barring discrimination based on sex applies to sexual orientation.

A number of religious groups, including the USCCB, weighed in with friend-of-the court briefs in favor of the employers. The USCCB brief said the added employee protection could impact faith-based schools, health care providers and homeless shelters that operate by “religious and moral convictions.” Dozens of companies and advocacy groups filed briefs in support of the employees.

Currently, more than 20 states and the District of Columbia have laws in place to protect against employment discrimination based on sexual orientation and gender identity with exceptions for religious employers.

Luke Goodrich, vice president and senior counsel of Becket, a nonprofit religious liberty law firm, told reporters that if the court views these employee cases as discrimination, there will likely be new lawsuits and “massive liabilities with churches, schools and religious organizations” that expect their employees to follow certain standards.

He said there are exceptions for those in ministerial roles with a religious function, but he noted that no matter how these exemptions are interpreted, there is likely to be a lot of confusion.

A ruling on that case also is expected in June.