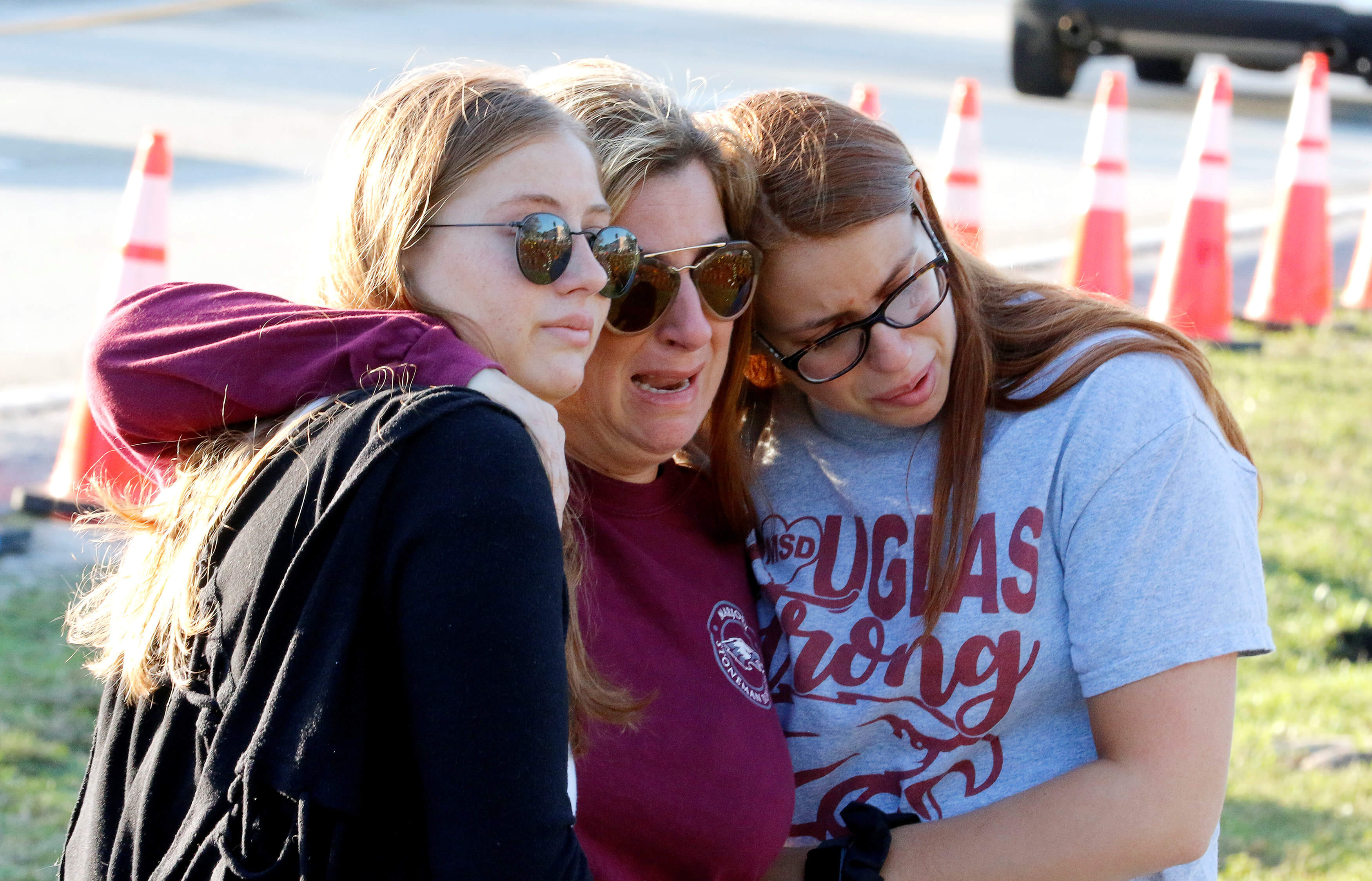 Photo Credit: CNS/Joe Skipper, Reuters - Cheryl Rothenberg embraces her daughters, Emma and Sophia, Feb. 14 as they view a memorial on the first anniversary of the shooting that killed 14 students and three staff members at Marjory Stoneman Douglas High School in Parkland, Florida. Sophia is a student at the school, and Emma is a recent graduate.

One day before the anniversary of the shooting at Marjory Stoneman Douglas High School in Parkland, neighboring Mary Help of Christians School had a prayer service to pay tribute to the victims.

The event was attended by teachers, staff, students, parents and invited guests, including Parkland Mayor Christine Hunschofsky and the parents, family members and friends of Gina Montalto, a Mary Help of Christians parishioner killed in the shooting.

The student-led event featured the school choir and student council members paying special tribute to the 14 students and three staff members killed on the high school campus last Feb. 14. The students made heart-shaped wreaths and angel crosses for each victim and one for the Parkland community.

Msgr. Terence Hogan, Mary Help of Christians’ pastor, reminded the participants that the parish is a strong faith community that unites and sustains each other, especially during difficult times.

At the end of the service, teachers, staff, students and parents placed a pink carnation in a vase by a statue of Mary.

The response of the Marjory Stoneman Douglas High School students’ response to the shooting on their campus started the movement #NeverAgain and thrust many of the survivors into the national spotlight when they organized the national “March for Our Lives” and lead rallies around the country calling for stronger gun control legislation.

On the first anniversary, the students and staff members of the school planned to remember the day by spending time visiting graves, packing meals for the needy and taking part in other service projects.

The school planned to run on a half-day schedule Feb. 14. In the morning, students were serving breakfast to first responders and were to be dismissed nearly three hours before the time the shooting began, about 2:20 p.m.

Many students said they would not attend school on the anniversary. Other local schools also planned to work on service projects and observe a moment of silence.

A ceremony to honor the shooting victims was scheduled to take place in a park near the school where students were also preparing meals for disadvantaged children. A nondenominational, temporary temple was set to open in nearby Coral Springs, where some of the students live, giving people a place to mourn or reflect and leave mementos or write messages. It will remain open until May.