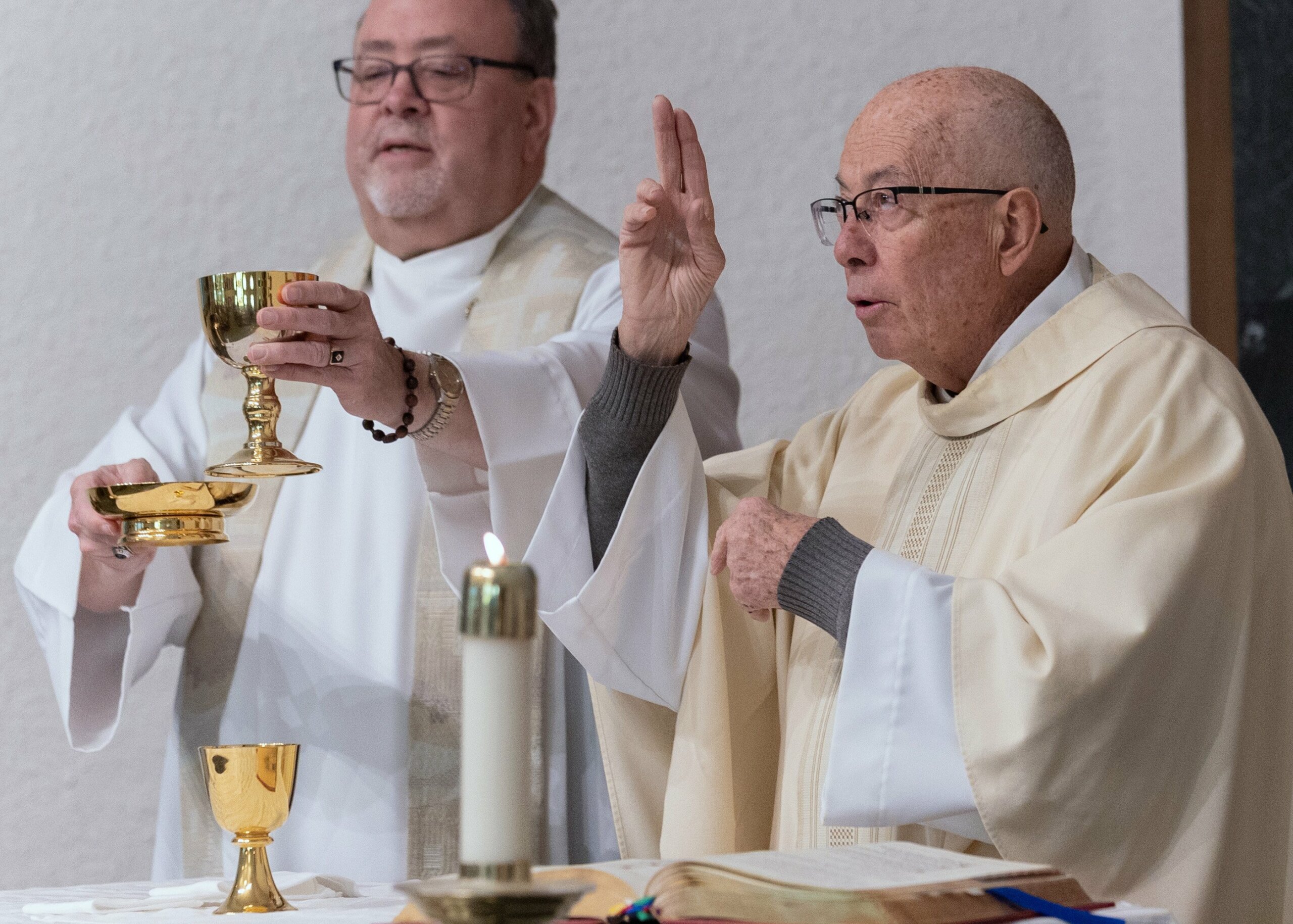 Photo Credit: CNS/Dave Hrbacek, The Catholic Spirit - Father Tom Coughlin, the first deaf man ordained a priest in the U.S., prays the Eucharistic Prayer using sign language during Mass at Our Lady of Mount Carmel in Minneapolis recently. At left is Father Mike Krenik, pastor of Our Lady of Mount Carmel, who is learning American Sign Language.

Parishioners at Our Lady of Mount Carmel Church in Minneapolis, about half of whom are deaf, attended Mass celebrated by the first deaf man ordained a Roman Catholic priest in the U.S., Father Tom Coughlin.

About 80 people attended the Mass Nov. 20 at the small church, a fact noted by Father Coughlin in his welcome.

He used American Sign Language to say he came from a “huge, fancy, million-dollar cathedral” in New Jersey to this “cute, little church” that is cozy and warm.

Ordained in 1977 for the Trinitarians, Father Coughlin, 75, left that order and helped found a community of priests and brothers who minister to the deaf, disabled, marginalized and minorities in parishes and hospitals. The order, the Dominican Missionaries for the Deaf Apostolate, is based in Newark, New Jersey.

“I feel all the warmth and love,” he told the congregation. “Jesus is here with you.”

After the liturgy, deaf parishioner Carol Buley, 73, said it was “really exciting” to have a deaf priest celebrate Mass, which doesn’t happen often.

Interpreter and parishioner Susan Sweezo, born to deaf parents, used a microphone at the front of the church to speak Father Coughlin’s words to the hearing audience. During parts of the Mass with singing, parishioner Stephanie Stork stood near the altar and signed the words. Two others each took a turn.

Father Coughlin, an incardinated priest in the Diocese of Honolulu, concelebrated Mass with Father Mike Krenik, pastor, who is learning ASL. The parish has about 120 parishioners.

Jesuit Father William O’Brien, director of novices for the Jesuit Novitiate of St. Alberto Hurtado in St. Paul, had invited Father Coughlin to visit sometime with deaf novice Todd Honas of Nebraska, who is in his first year of formation. That opportunity presented itself when Father Coughlin traveled to the Twin Cities to preside at a wedding Nov. 19.

Honas, 25, has been helping at the Our Lady of Mount Carmel since September, serving as a lector at Masses, leading a weekly “faith group” and, occasionally, delivering Communion to deaf parishioners. Father Coughlin said Father O’Brien hoped to give Honas support and encouragement.

“He has the right personality, skills and intelligence, and he has the vocation for it,” Father Coughlin said of Honas. The pair have been communicating for about a month via a “video relay phone,” signing back and forth on the screen.

“It’s very important for him that I’m his friend and supporter because he’s so new in this experience, coming into a religious community, religious life, … and I’m so happy to give him advice and support,” Father Coughlin said through an interpreter.

Honas said having the first ordained deaf priest in the U.S. connect with “the most recent man to want to become a deaf priest (is) kind of a cool mix.”

Father Coughlin recalled feeling lonely when he was a novice and thinking about leaving. But his director told him, “You have to suffer so that other people can have it easier.” Father Coughlin then understood the meaning of his suffering. “That gave me a purpose of why I have to suffer coming into the seminary,” he said. He decided to stay.

Through an interpreter, Honas said people who are deaf do not need to be “fixed” and they don’t want sympathy.

“We accept our deafness … but we want (others) to understand that from our perspective,” he said.

It can be frustrating meeting with priests and bishops who cannot communicate with the deaf, he said. Noting that many priests know Latin, Greek, Spanish, “Could they learn ASL?” he asked. He suggested offering ASL classes at seminaries as a start.

Deaf people face significant challenges as priests, he said, such as administering the sacrament of penance because “you can’t use an interpreter for penance; you have to have a deaf priest.” He wishes interpreters were not needed at Mass because “circumventing has to occur.”

“It’s not direct communication,” he said.

Father William Kenney, 92, who served the deaf and hard of hearing in the Archdiocese of St. Paul and Minneapolis for 40 years, attended the Nov. 20 Mass. Our Lady of Mount Carmel initially served a large population of Italians, and as numbers dwindled, there had been talk of closing the parish, he said.

So, he told parishioners that “if we wanted to keep it open, if we brought our deaf community here, they would have the opportunity to stay open,” he said. “And they all wanted the deaf to come.”

Serving those who are deaf or hard of hearing is a reminder, Father Kenney said, “that we should be mindful of those who are not able to use the normal avenues to make contact with their religious faith.”