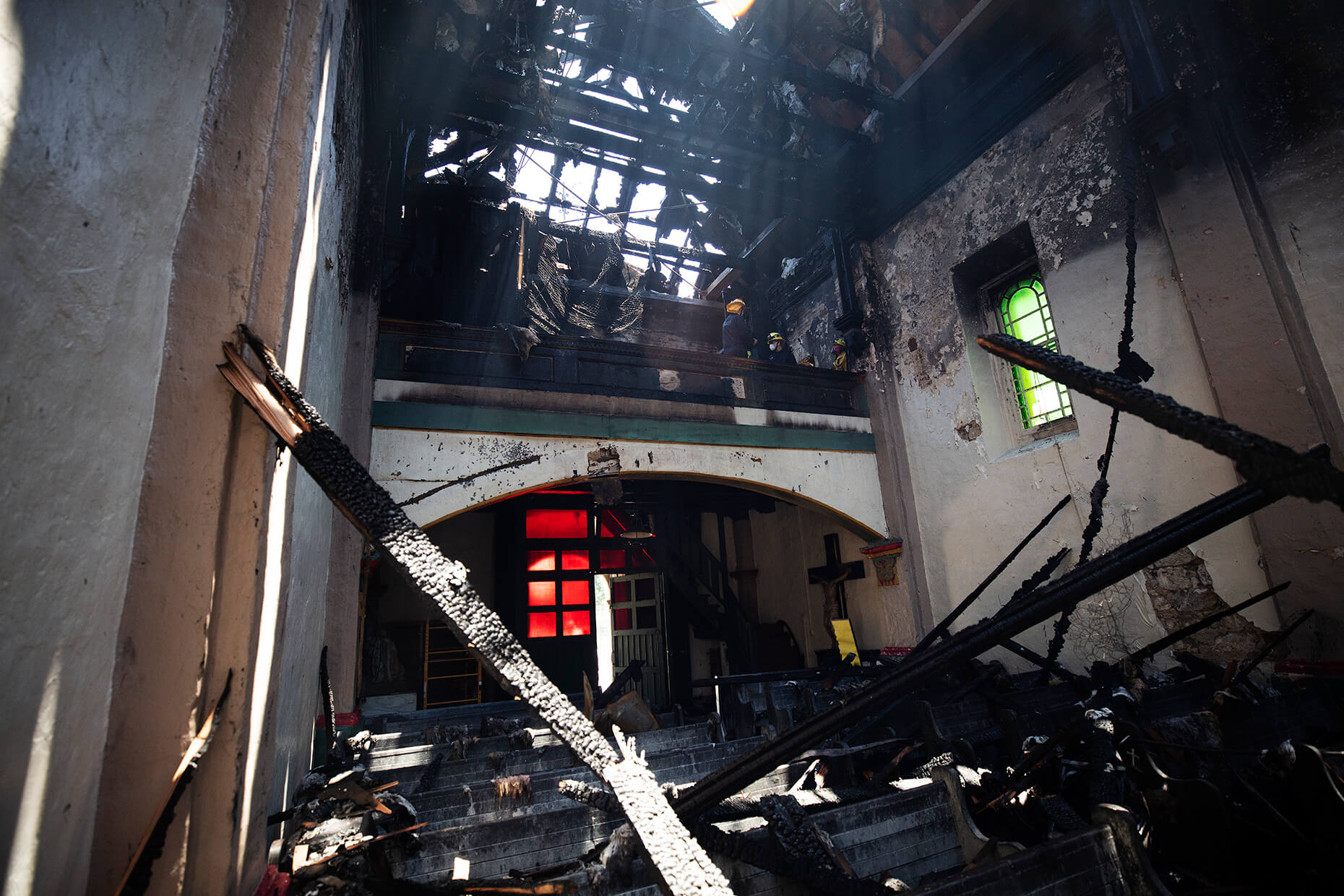 The fire that ravaged Mission San Gabriel Arcangel church in the predawn hours of July 11 left behind a haunting scene.

In a matter of minutes, the mission’s 230-year-old roof was nearly gone. The sunlight pouring down through the holes revealed the charred planks that had crashed down on the church’s pews. The altar, along with the mission’s bell tower and museum, were spared, but the thick adobe walls were blackened.

As bad as the damage is, it could have been worse. Because the church had been undergoing renovations, much of the artwork in the sanctuary, including historic paintings and other devotional artifacts, had been removed prior to the fire.

But for Anthony Morales, tribal chief of the San Gabrielino Mission Indians and a parishioner of San Gabriel, the damage was more than material.

The devastation was just the latest blow to be suffered this year by Los Angeles’ oldest Catholic outpost.

As 2020 started, preparations were underway to celebrate a “Jubilee Year” leading to the 250th anniversary of St. Junipero Serra’s founding of the mission Sept. 8, 1771.

But that was before the coronavirus pandemic forced the shutdown of California churches and a lockdown of the economy. Just several weeks before the fire, mission officials had decided reluctantly to postpone the jubilee plans for a year, while continuing work on much-needed renovations and improvements to the church.

As the church reopened for public Masses, along with others in the Archdiocese of Los Angeles, waves of anti-racism protests had broken out across the country, protests that included attacks on public monuments and statues of figures from U.S. history, including statues of St. Junipero, like those found on the mission’s campus.

In late June, statues to the California missionary were toppled in San Francisco and in Los Angeles, and the weekend before the fire, a long-standing St. Junipero statue outside the state Capitol in Sacramento was felled.

That same weekend before the fire, San Gabriel staff had quietly removed one of St. Junipero’s statues from public view to keep it safe from possible vandalism.

The July 11 blaze at San Gabriel was part of a weekend that saw churches vandalized in other parts of the country. Statues of Mary were damaged in Queens, New York, and in Boston; in Ocala, Florida, a man drove a minivan into a Catholic church before pouring gasoline in the foyer and setting fire to the building.

While there was no immediate word on the cause of the fire, investigators from a regional task force and from the U.S. Bureau of Alcohol, Tobacco, Firearms and Explosives spent Saturday afternoon in the front of the mission, where the fire is believed to have started, City News Service reported July 12.

Local Catholics who showed up at the mission the next day to pray were suspicious. The timing of the fire — and the broader attacks on St. Junipero statues and other church properties — was too much of a coincidence for them.

“We don’t know how it happened, but it seems like the church is under attack. There’s a lot of resentment and a lot of anger,” Miguel Sanchez, president of the local “Knights on Bikes” chapter, told Angelus, the online news platform of the Los Angeles Archdiocese.

Sanchez and his fellow motorcycle-riding Knights of Columbus members were among the dozens who gathered outside the damaged church Sunday morning July 12, despite nearly triple-digit temperatures to pray the rosary. Some came from as far as Orange and San Diego counties after word about the gathering spread through social media.

One of those was Barbara Quigley, a teacher at Our Lady of Perpetual Help School in Downey. She said the lessons of her fourth-grade California history class were worth keeping in mind.

“I’m not a stranger to teaching my students that a lot of the missions have gone through earthquakes and fires, and they’ve been able to rebuild,” said Quigley, who drove from Anaheim to join the prayer group Sunday morning.

“So I have full faith and confidence that our church will be able to restore the mission. It won’t be the same, but (the mission) will still stay and we’ll be resilient,” she said.

Resilience was the theme that morning inside the mission’s Chapel of the Annunciation, where the mission’s pastor, Claretian Father John Molyneux, made a bold pledge to Archbishop Jose H. Gomez of Los Angeles.

“You will be back to celebrate our 250th anniversary in a rebuilt church,” Father Molyneux promised the archbishop at the start of Mass.

Archbishop Gomez had visited the mission just after the fire was contained and came back the next day to celebrate the Sunday Mass and to show solidarity with grieving parishioners.

In his homily, he sounded a hopeful tone.

“This fire changes nothing,” the archbishop said. “Mission San Gabriel will always be the spiritual heart of the church in Los Angeles, the place from which the Gospel still goes forth.”

Archbishop Gomez invoked the intercession and example of the mission’s founder, St. Junipero, a Spanish missionary who advocated for the rights of California’s native peoples, including the Gabrielino-Tongva Tribe, who built San Gabriel.

“St. Junipero and the first Franciscan missionaries answered the Lord’s call and sacrificed everything to bring his word to this land,” he said. “Now it is our turn to make sure his word is proclaimed to the next generation.”

After the Mass, Kathleen and Elizabeth Chelling said they were encouraged by the archbishop’s message.

“I think that for a lot of years, there has been this kind of complacency in a lot of Catholic circles,” said Kathleen, who drove up from Orange County with her sister to participate in the rosary and stayed for Mass.

“I hope that these difficult times can serve as a wake-up call,” she added. “If you look at a lot of the saints’ lives, a lot of them came from time periods of difficulty. Instead of turning into despair or bitterness or walking away, they used it as motivation to go deeper.”

A tragedy like the fire, she added, “is a reminder of how deeply Jesus is needed.”

In a time of pandemic and economic recession, the task of rebuilding the historic church in time for the anniversary on Sept. 8 of next year will be daunting. But by the end of the Mass, the archbishop seemed ready to take Father Molyneux at his word.

“We are going to celebrate the 250th anniversary next year — for sure,” Archbishop Gomez told parishioners, who responded with cheers. “And this is the beginning of the next 250 years.”