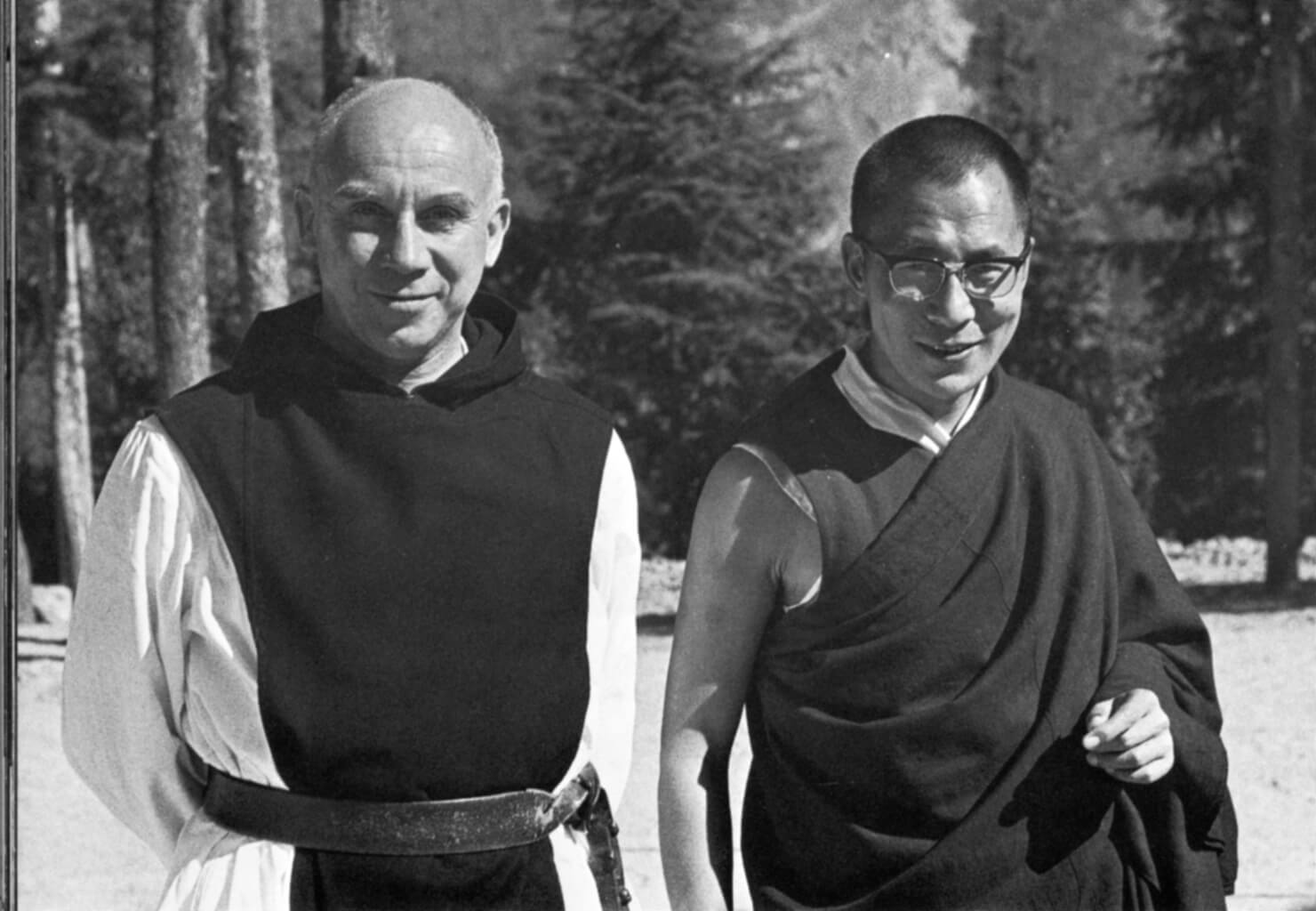 Photo Credit: CNS/Thomas Merton Center at Bellarmine University - Trappist Father Thomas Merton is pictured with the Dalai Lama in 1968. Fifty years after his death, Father Merton, the influential Trappist monk who lived and wrote from the Abbey of Gethsemani near Bardstown, Kentucky, is still helping to draw others nearer to Christ through his writings and the communities they tend to create, said Cistercian Father Lawrence Morey.

Father Thomas Merton still has impact on people of all faiths, priest says

Fifty years after his death, Father Thomas Merton is still helping to draw others nearer to Christ through his writings and the communities they tend to create, said Father Lawrence Morey.

Like the late monk, Father Morey is a member of the Cistercians of the Strict Observance, known as Trappists.

Father Merton lived and wrote from his order’s Abbey of Gethsemani near Bardstown, Kentucky. He died Dec. 10, 1968, near Bangkok, where he was attending a conference for monks from the Order of Cistercians and the Order of St. Benedict.

Father Morey gave the homily during a Mass of remembrance honoring Father Merton Dec. 10 at the Cathedral of the Assumption in downtown Louisville. Archbishop Joseph E. Kurtz of Louisville presided.

The priest said the support of a community is essential in finding Christ and most of Father Merton’s writings show how important community was to him.

Father Morey shared with his listeners that the burial of a brother monk at the Abbey of Gethsemani is a “community affair.” All the monks take part by singing and praying. Six are chosen as pallbearers with the responsibility of lowering the body into the ground.

“We all participate at this point by holding our breath,” he said. “What if one of the brothers slip and loses his grip? But we’ve always managed to get our brother to his final resting place without any major accident.”

The paralyzed man from the Gospel of Luke, whose friends lower him through the roof so he could see Jesus, is somewhat like “our deceased brother,” said Father Morey. He needed the support of his friends and a community to reach Christ.

Like the paralyzed man in the Gospel, “we all need community in order to find Jesus,” Father Morey explained.

Community, however, is often missing in today’s world, he said, noting that people often use their differences to separate themselves from others.

Though he sometimes had “problems with his community, Father Merton was a good community member” who recognized its value, said Father Morey. He was conscientious and obedient, and though sometimes he murmured about it, “the community provided him with the opportunity to write, gave him a solid perspective from which to see the world and eventually constructed his hermitage for him.”

During his years at Gethsemani, Father Merton also formed a larger community through correspondence with people from around the world — people of different religious backgrounds, said Father Morey.

While the late monk’s community helped him find Christ, in return, Father Merton has touched many through his writings, said Father Morey. “He’s helped many people to see their own true face.”

He went on to explain that in one of Father Merton’s “most famous pieces, he described seeing ordinary people going about their business on an ordinary day as ‘walking around shining like the sun.’ He said, ‘It was like waking from a dream of separateness, of spurious self-isolation.’ He saw himself and others as they truly were, fellow members of race in which ‘God himself became incarnate.'”

This has been Father Merton’s gift to many, said Father Morey — “to show them who they truly are. To show them the face of Christ in themselves and others.”

Those who’ve been touched by Father Merton often want to share their experience, added Father Morey.

“He makes people seek others out to form various kinds of communities. We’ve only to look around this very church to see this,” he said, referring to the group of young, old and middle-age people who’d gathered to remember Father Merton half a century after his death.