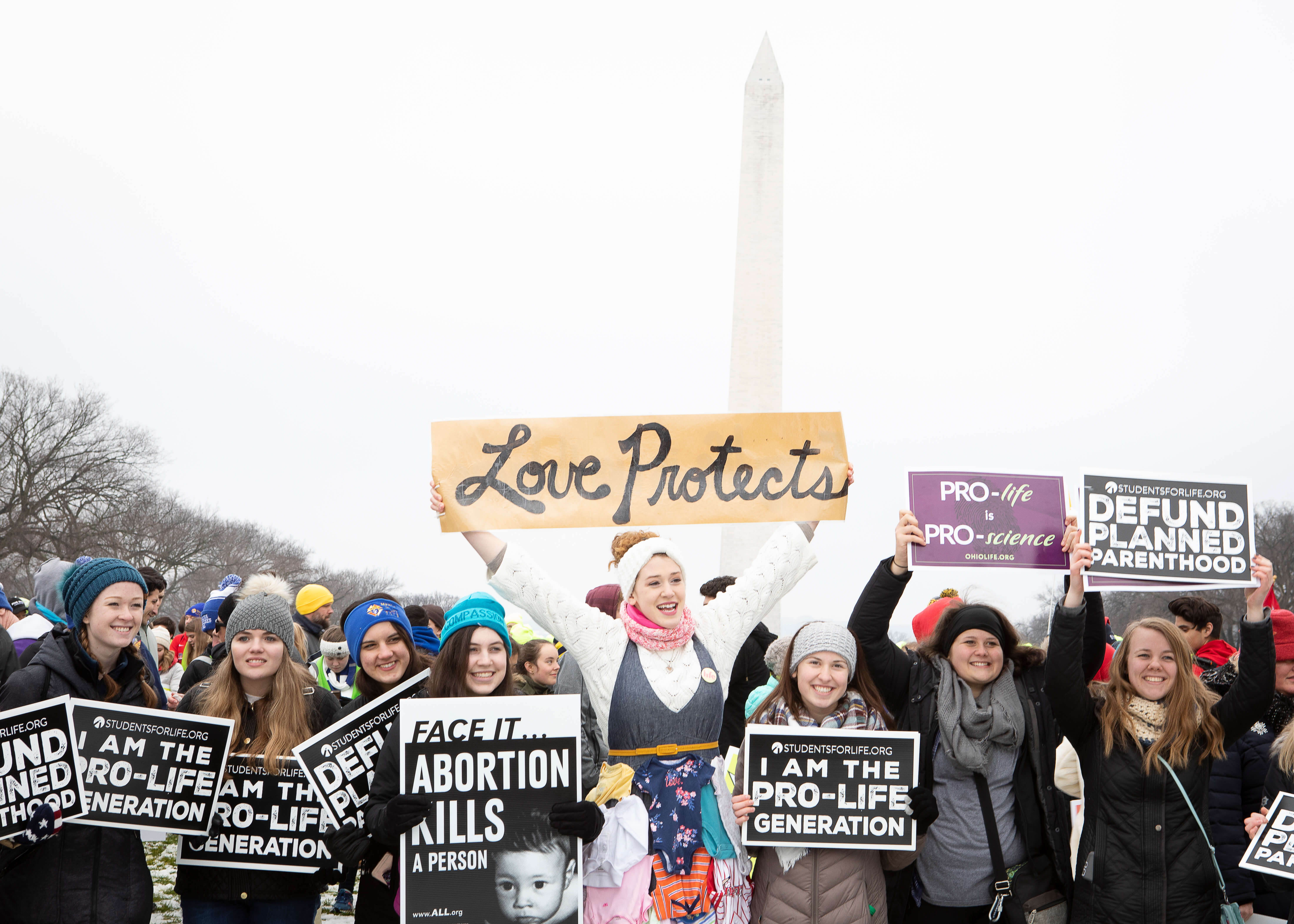 The ritual sights of the annual March for Life never seem to change.

Tens of thousands congregate on the National Mall on a brisk winter morning. Many of them have arrived after hours on the road as part of bus caravans.

They listen to speeches and then march up to the U.S. Supreme Court to mark the 1973 Roe v. Wade decision that legalized abortion nationwide.

The speeches and the marchers each year call for respect for all life and an end to abortion, but there’s nothing monolithic about the marchers. In fact, there’s great texture there and a diversity of faith traditions.

Alexander Kvenvolden and wife Aleah, at the march for the second year, had come all the way from Seattle by themselves. Despite the damp chill and the remains of a snowfall on the ground, Alexander was in khaki shorts. “I like shorts all the time,” the software developer explained.

They’d both been active in Students for Life while in college. “I’m also super-stoked about (rally speakers) Ben Shapiro and Abby Johnson (founder of And Then There Were None),” Alexander said.

Ahead of his remarks to the rally, Shapiro, a commentator and editor-in-chief of The Daily Wire, did a pre-rally podcast from the stage. He took a call from Vice President Mike Pence to appreciative whoops from the crowd. Later, Pence and his wife, Karen, made a surprise appearance at the rally.

“It’s an extraordinarily important event,” Pence said of the march. “Forty-six years ago this month, the Supreme Court turned (away from) the inalienable right to life.”

In the crowd of marchers, Franciscan University in Steubenville, Ohio, was well represented by about 400 students. It was one of the larger groups — they’d had taken a five-hour bus caravan to get to the nation’s capital. Sophomore Abigail Kehoe was marching for the second time.

What brought her back? “The babies,” she replied. She’s part of a group that sometimes prays in front of an abortion clinic in nearby Pittsburgh.

Kent and Karen Powell, were attending for the first year and brought their 8-year-old daughter, Channing. “We’ve seen it happen, but never had a chance to come,” Kent told Catholic News Service. Their church is a member of Charis Fellowship, a network of places of worship formerly known as the Fellowship of Grace Brethren Churches.

The couple used to participate in the annual Life Chain surrounding abortion clinics on the Sunday before the Supreme Court begins its term in October. “It’s the least we can do for life,” Kent said.

“It’s just an amazing experience, and I want to put action where my words are,” said recent graduate Kaity Cleveringa, attending the march for her second year. “It’s a good place to start.” She and senior Maddisen Baumann said they volunteer at the Alternative Pregnancy Center in Denver.

The Diocese of Toledo, Ohio, was represented by about 200 marchers. Henry Keller, a homeschooled teen, said: “I’ve always been attracted to this huge group of people who just want to stand up for life. We can get there and spread the word to the world.”

The Archdiocese of Omaha, Nebraska, sent a caravan of nearly 400 marchers on nine buses that arrived in Washington after a grueling 25 hours. Teresa Kenney, a nurse-practitioner at the Pope Paul VI Institute for the Study of Human Reproduction, marching for the second year, said she was inspired by her daughter, Anna, a senior at Marian High School in Omaha, who helped found a Students for Life chapter there.

“We want to leave a legacy of her high school … so we can just keep growing on it,” she said. “Even at an all-girls high school, some don’t feel enough strength to speak up (about pro-life views).”

St. Gabriel’s Catholic Church in Midlothian, Virginia, sent 45 people. It was the first year for Mike Clapper. “You know, going to church and hearing about it, I just decided I’m coming,” he said. “It’s an opportunity to express our beliefs.”