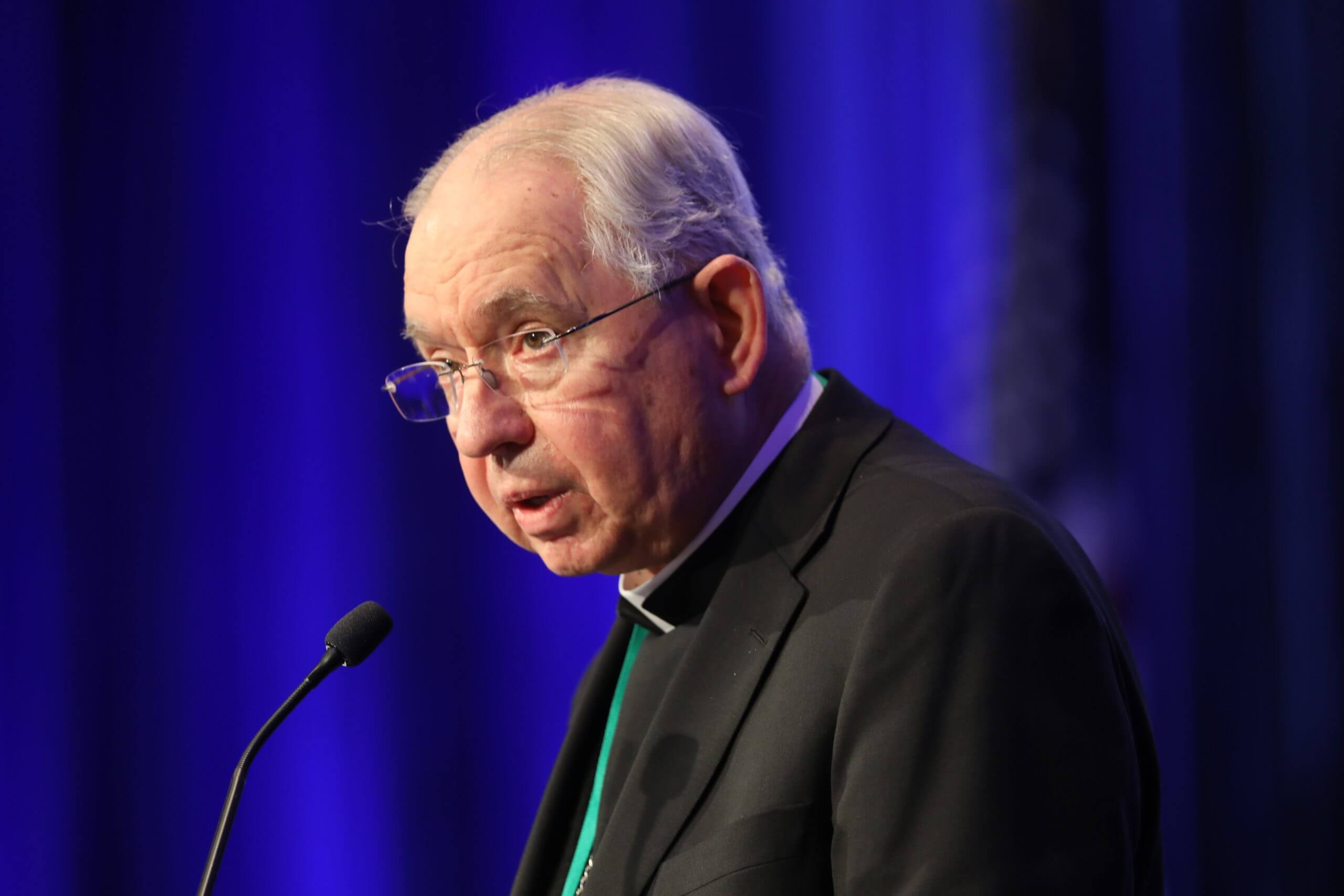 Photo Credit: CNS/Bob Roller - Archbishop José Gomez of Los Angeles, president of the U.S. Conference of Catholic Bishops, gives his presidential address Nov. 16 during a session of the bishops' fall general assembly in Baltimore. Due to the Covid-19 pandemic, it is the first in-person bishops' meeting since 2019.

The U.S. Church today is called more than ever to carry out its centuries-long evangelizing mission at a time of spiritual awakening rising from “under the clouds of the pandemic” and the country’s uncertain future, the president of the U.S. Conference of Catholic Bishops told his fellow prelates.

“People are starting to examine what they truly believe and what they value most deeply in their lives,” said Los Angeles Archbishop José Gomez, who spoke Nov. 16 during the opening public session of the USCCB’s Nov. 15-18 general assembly in Baltimore.

The questions people have allow the Church to continue its mission, even in an increasingly secularized society, the archbishop said.

The challenge, he said, is “to understand how the Church should carry out her mission.”

Archbishop Gomez acknowledged that differences among members of the Church exist because of the differing views people hold on how to move forward. Still, he said, “there are also many signs of hope” that present new opportunities to bring the Gospel to others.

The archbishop turned to a 19th-century prelate to find inspiration for the path ahead. Archbishop John Ireland, who as a young priest served as a chaplain in the Union Army, was a “powerful advocate for African Americans and for the rights of immigrants,” he explained.

“Archbishop Ireland believed deeply in what Rev. Martin Luther King and others have called the ‘American creed,’ the belief expressed in our founding documents that all men and women are created equal and endowed with sacred dignity, a transcendent dignity, and rights that must never be denied,” Archbishop Gomez said.

The address continued, “The duty of the moment is to understand our responsibility and to do the full work that heaven has allotted to us. … With us it will be done, without us it will not be done.”

“Second, he understood that the Church’s purpose does not depend on forces outside the Church. It does not change with the culture, or politics or the spirit of the age,” he added.

“The Church’s mission is the same in every time and place. It is to proclaim Jesus Christ and to help every person to find him and to walk with Him,” Archbishop Gomez said.

From there, he said, it remains for all members of the Church to act, and by acting, the challenges posed by injustice, poverty and other social ills can be overcome.

Secularization and division seem to be leading American society “to be losing its ‘story,'” the archbishop continued. It’s a story that gave people meaning in their lives that is rooted in “a biblical world view and the values of our Judeo-Christian heritage.”

That story, he added, told of how each person was created in God’s image and “invested with an earthly vocation to build a society where people live in freedom, with equality and dignity.”

“What we see all around us now are signs that this narrative may be breaking down. This is one of the consequences of living in a secular society. We all need God to help us to make sense of our lives, so when we try to live without God, we can become confused,” Archbishop Gomez explained.

Again recalling Archbishop Ireland, the USCCB president said that “the duty of the moment” is “this beautiful responsibility that we have to tell the Christian story once again to the people of our times.”=

Archbishop Gomez said he believed people are searching for God “and they are willing to let themselves be found by God.”

“I believe they are ready to listen once again to the Word of truth and the Word of life. I think there are also people in our society, those who grew up without religion, who are ready to hear the Word for the very first time,” he said.

He turned to Pope Francis and the call in “The Joy of the Gospel” in which the pontiff envisioned a missionary Church that can transform the world.

“Again and again, the Holy Father reminds us: the Church exists to evangelize. … To be a Christian is to be a missionary disciple. There is no other definition,” the archbishop said.

He also described the three-year eucharistic revival that the U.S. Catholic Church will undergo as a “missionary project” that aims to draw people deeper into the heart of the mystery of the Catholic faith.

He invited the bishops to accompany the faithful during the revival by sharing their personal stories of discovering “friendship with Jesus and the love of God” in the Sacrament of the Eucharist.

Calling the Eucharist “the gateway key to the civilization of love that we long to create,” the archbishop said that reviving “this sacramental awareness” can help end “Human indifference and social injustice.”

“Brothers,” he said, “our beautiful task is to continue to tell the Catholic story, to reveal Jesus to our people — to place their hands in his hand so that can be his light and follow him on the path to eternity, to the love that never ends.”